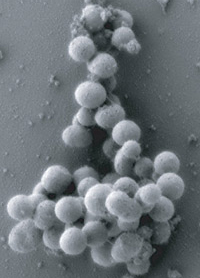 It’s the ultimate science experiment, really — taking a handful of chemicals, mixing them in just the right combination and presto — life!

And after nearly 15 years of such toiling in his labs in Rockville, Md., J. Craig Venter, co-mapper of the human genome, has done just that. Reporting in the journal Science, he describes a remarkable experiment in which he and the team at his eponymous institute have pieced together the entire genome of a bacterium and then inserted those genetic instructions into another bacterium. The cell booted up, and life — by nearly any definition — was created.

“We’re basically getting new life out of the computer,” Venter says. “We started with a genetic code in the computer, wrote the ‘software,’ put it into the cell and transformed it biologically into a new species. We’re still stunned by it as a concept.”

With Venter’s breakthrough it’s now possible to splice and snap together genetic material to create a Legoland’s worth of new genetic combinations. Ideally, some of these would have robust industrial purposes, such as manufacturing bacteria that can churn out valuable vaccine components to shorten production times during an epidemic, or co-opting organisms such as algae to pump out new sources of biofuel-based energy.

“Just imagine these cells where all we do is put in a new piece of chemical software and all the characteristics of the cell start changing to become what was dictated by the new software,” says Venter. “These are biological transformers.”

The paper is the final and most critical step toward realizing what began as scientific curiosity among the scientists at the J. Craig Venter Institute back in the early 1990s, when many of the same researchers first succeeded in sequencing the entire genome of a self-replicating organism, the bacterium Haemophilus influenzae. That led to the generation of the complete sequencing of the smallest known genome, at 582,000 base pairs, belonging to another bacterium, Mycoplasma genitalium. Such smallness was intriguing because it led Venter to the philosophical question that inspired the current research — what was the minimum genome required to create life in the lab?

For the study just released, the answer turned out to be about 1 million, and the paper describes how he did it. DNA is made up of millions of paired molecules known as bases, some of which make up genes, that when read by enzymes produce the proteins essential for sustaining life. Venter intended to build his own version of the tiny M. genitalium genome, but the species replicates slowly and that would have caused delays in his study. Instead, he turned to the larger but significantly quicker bacterium Mycoplasma mycoides, with 1 million base pairs. He fed the blueprint of the M. mycoides genome into a computer, mixed together varying combinations of the four basic elements of DNA — the bases adenine, cytosine, guanine and thymine — and pieced them together in three stages. To ensure that the strings of bases were lining up in the correct order, he and his team attached known segments of DNA to the ends of each piece, allowing them to find and link up with their appropriate sections like genetic Velcro joining.

What made the work unwieldy is that even a very small genome has a lot of base pairs and current sequencing machines can handle only 50 to 80 at a time. To align the ever-growing strings of DNA, Venter thus enlisted the help of some natural born synthesizers — yeast and E. coli. These organisms are quite adept at stitching together huge pieces of DNA, and once they did their job, the genome was complete.

But that was only half the goal. The next step was to insert the man-made genome into a cell and see if it could function properly and cause the cell to divide. “The first transplants we did — we usually do them on a Friday and on Monday morning we come back to see if anything grew — didn’t work,” Venter says. “Then a month ago, I got a text at six in the morning that we had a colony.”

Venter is the first to concede that while what he has created is life, it’s not new life, since the synthetic genome is a copy of an existing one, albeit with a few modifications. In order to confirm that the genome they generated was indeed entirely manmade, the scientists inserted some genetic watermarks, including their names and three philosophical quotations. Since the four-based genetic code is read in three-letter triplet combinations, the scientists devised a new code in which the 64 possible triplets symbolize the letters of the alphabet and punctuation. One of the quotes, by James Joyce, was especially apt: “First to live, to err, to fall, to triumph and to create life out of life.” Says Venter understatedly: “The chances of finding these sequences in the natural genome are close to zero.”

7 Responses to Has Science Created Life?