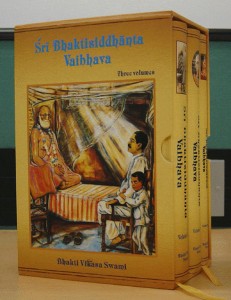 How is one to describe the life of great Vaishnavas? Many Gaudiya Vaishnava devotees are upset by descriptions in Satsvarupa dasa Goswami’s Srila Prabhupada Lilamrita that seem to portray him as an ordinary man. Others relish precisely those parts, since by acknowledging the humanity of the saint, they hold out the promise that one day all of us can rise to such heights of devotion. Both sides will find backing in the scriptures: the holy writ both warns us against viewing saints as ordinary human beings and encourages us to celebrate the saintly potential of the lowliest ant.

This wealth of material gives the author the opportunity to paint a much fuller and richer portrait of Saraswati Thakura than anyone has before. While the author does not dwell on politically controversial issues (such as the conflicts between members of the Gaudiya Math), he does mention them, and usually manages to bring out the good in both sides.

By not shying away from these topics (contrary to advice given to him), the author affords many readers a first glimpse into the dynamic spiritual reality of the Gaudiya Math during the time of Saraswati Thakura. I feel that this is extremely important. There is a tendency in some quarters today to similarly see ISKCON during the manifest presence of Srila Prabhupada as some kind of a golden age, where all movement was dance, all talk was song, and nobody knew the meaning of the word politics. Glorifying the past is natural, but it may lead to an unrealistic understanding of what spiritual life ought to be, and especially to the tendency to try to freeze the dynamism of a reformer into dead forms. I will return to this point later.

Bhakti Vikasa Swami’s book comes in three hardbound volumes of almost 1500 pages altogether. The first two volumes contain many illustrations, some of which have never been widely published before. All three volumes come in one attractive folio, but unfortunately the quality of the binding—at least of the copy I perused—is substandard. Fortunately, that is not the case with the contents.

Volume one begins with a biographical sketch of Saraswati Thakura’s life. For persons familiar with any of the biographies mentioned above, this part of the book contains the least new material. Still, in presenting a richer and more nuanced picture than earlier hagiographies, the author does yeoman service to all followers of Saraswati Thakura.

This overview is followed by a part dealing with the message, mission, and personality of Saraswati Thakura. Topics covered here include educational projects, collection and spending, Saraswati Thakura’s personal diet and preferences, and the theistic exhibitions arranged by the Gaudiya Math. This part of the book is replete with information never before printed in English and essential to understanding the sometimes paradoxical nature of Saraswati Thakura.

Volume two is divided into three parts. The first is called “The Preaching Challenge” and deals with many of the particular challenges that Saraswati Thakura’s novel style of propagating Gaudiya Vaishnavism was faced with. This includes a lengthy section on the apasampradayas that Saraswati Thakura so fiercely opposed, but also a chapter on preaching in Europe that many readers will find interesting.

The second part deals with Saraswati Thakura’s disciples and associates, offering captivating profiles of many of his most important sannyasi disciples, but also of ordinary householders. By thus recognizing the importance of Saraswati Thakura’s followers and disciples (parshads), the author avoids the politics of almost all of the earlier works, where some disciples are inordinately elevated and others belittled or even completely ignored. For an ISKCON publication, this is most welcome.

Unfortunately, the profiles deal only with the lives of these people during the manifest presence of Saraswati Thakura, generally only mentioning if they later accepted sannyasa initiation. That the author chose to focus on this time is both natural and understandable, given his desire to avoid dealing with the schismatic feuds that broke out after Saraswati Thakura’s passing. However, by neglecting the later lives of these disciples, he misses the opportunity to show how the breakup of the Gaudiya Math was not only a traumatic event that shattered the unified preaching effort of Saraswati Thakura, it also gave individual devotees a chance to stand up and take responsibility. Today, there are far more Gaudiya Math temples—even not counting ISKCON and its offshoots—than there were during Saraswati Thakura’s presence.

Jati Shekhara Prabhu told the author: “My guru was a lion, your guru was a lion, may you also be a lion.” No doubt this has inspired the author, but while repeatedly stressing how Saraswati Thakura was correct in modifying the presentation of Gaudiya Vaishnavism to suit his particular time, place, and circumstances, the author seems to forget that such changes must continue. The author’s use of obscure English words such a saliferous, philanderer, and appetency in his own text may likewise be seen as sweetly following Saraswati Thakura—or alternatively, as simply copying an outdated form. Similarly, Saraswati Thakura needed to be hard and uncompromising towards what he called prakrita-sahajiyas, but are they really the main enemies of true Gaudiya Vaishnavism today?

Bhakti Vikasa Swami’s work is an extremely valuable addition to a growing collection of texts glorifying the founder of the Saraswata family of Gaudiya Vaishnavism. While carefully researched, it is not free of errors and omissions. Many of the mistakes are the result of politically colored descriptions. The statement that Srila Bon Maharaja did not dress in traditional sannyasi clothing in the West, for example, is inconsistent both with his own diary notes and pictorial evidence. But such mistakes are minor.

This is a book that deserves to be carefully studied by all Saraswata Gaudiya Vaishnavas, however, it will not be the last word said on Saraswati Thakura. Of special note here is Dr. Ferdinando Sardella’s recent doctoral thesis Bhaktisiddhanta Sarasvati, The Context and Significance of a Modern Hindu Personalist (available as an e-text online), which scholarly devotees may find of great interest.