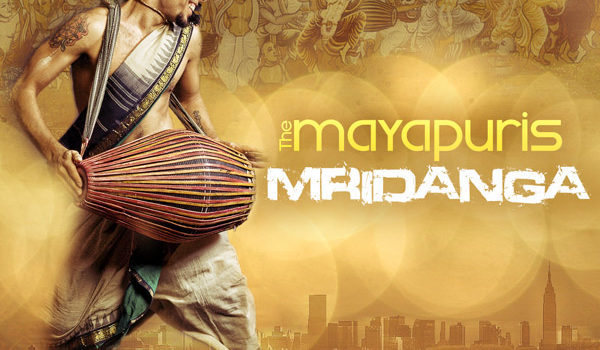 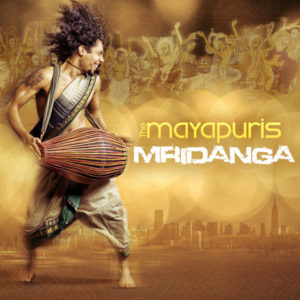 The Mayapuris are an interesting group. Its four members were born into Gaudiya Vaishnava families, spent long periods of time in India, and have done kirtana their whole lives. At the same time, they have lived a big part of their lives in the West and naturally have been influenced by the modern world. The cover of Mridanga perfectly depicts the cultural junction at which the Mayapuris stand: at the top there’s an ancient painting of Mahaprabhu’s kirtana and at the bottom there’s a shot of a modern metropolis with its skyscrapers and office buildings. In between the two-in many ways diametrically opposed-realities there’s Vishvambara Seth, the lead singer and front man of the group, beating his drum with passion.

It is said that religion has to adapt to the times in order to stay relevant; if it keeps itself at a distance in fear of losing its original purity, it will dwindle to a marginal oddity. Historically speaking, The Mayapuris are a natural progression from the old school Iskcon days: their mood is more mellow, mature, and integrated. It shines with its absence of fanatical zeal. At the same time, the group is not shy that their aim is to promote Mahaprabhu’s mission in the form of kirtana. It certainly makes sense that it is the second-generation Gaudiyas who are able to make hip and marketable kirtana that sits well with 21st century western sensibilities, while at the same time retaining their spiritual integrity. Since second-generation devotees stand between two worlds, they are in the perfect position to grasp the hand of both realities and unite them in an unpretentious way.

Devotees used to be masters (and maybe still are?) of awkward opportunism. They would try to employ whatever was in vogue, somehow force it into a devotional context in the name of preaching, and in so doing end up looking like clueless fools (a good example: recording The Beatles’ songs with corny devotional lyrics). The Mayapuris don’t have even a touch of that in their production because their art is an unadulterated reflection of their reality. The honesty of expression is easy to detect. From the production of the music to the graphic design of the release and the brand they have built around themselves, everything is very professionally done and totally up-to-date. I couldn’t quite say the same about the Holy Cow albums, for example!

At the same time, with integration comes potential problems. Christianity serves as a stellar example of this, since it has mostly turned into a secularized and watered down stick figure of what it was supposed to promote in the world. I’m not saying that The Mayapuris are watering down Gaudiya kirtana, but they walk bravely on a line that’s drawn on water. When I first saw a Youtube video of the group dancing shirtless on stage, for a second I thought I was accidentally streaming the Backstreet Boys. Obviously the shirtless dancing comes more from the Manipuri drummers and not from any boy band, but that aspect of the group is definitely marketable and attractive in Western yoga circles.

Although I don’t see anything suspicious in these “young tigers of kirtana” The Mayapuri phenomenon did raise some natural questions in me: when trying to get Mahaprabhu’s message across, how far can you go into the secular mindset before the interface defeats its original purpose and you merge into what you were trying to change?

Bhaktivinoda Thakura says that the thirst for recognition (pratistha) is the worst enemy of the spiritual practitioner. At what point is the bhakti-yogin spiritually strong enough to step in the lime light and keep his or her head from swelling like a balloon? How can one know if one’s outreach turns into an insidious form of distraction? Of course the flipside is that if nobody reaches out and steps to the plate in fear of spiritual compromise, Gaudiya kirtana will stay marginalized and unknown in the world. That would certainly be a shame since the whole modern form of kirtana has its origins in Mahaprabhu’s movement and Gaudiyas have a lot to offer to the existing kirtana scene. It’s actually commendable that some are ready to take the risk in the name of getting a good thing out there.

The Mayapuris are a seamless musical synthesis of two worlds. Their sound is organic and natural, flowing effortlessly from serene prayers and chants to samba party music and raw, almost tribal sounding, street kirtana drumming. The end result is a railroad crash between the Oriental Express and the AmTrak that somehow ends up staying together and even sounding wholesome. It’s obvious that Gaura Vani has had a prominent role in composing and arranging the music, which comes through as a tasteful mixing of very different styles and moods without sounding chaotic.

Despite all the exotic melodies and layers of sounds in most of the tracks, my personal favorites are the two instrumental drumming tracks “Conundrum” and “Mridanga.” That’s what sets The Mayapuris apart from other kirtanyas, and I would love to hear more of that on the coming records. The opening track, “Song of Nadia,” is sparkling with the kind of youthful energy that The Mayapuris are becoming famous for and assures its place within the best songs on the record.

If you don’t believe the hype that the band seems to be creating, at least give them a fair chance by lending an ear to their music. You might be surprised.

Mridanga is available, here, as well as on Itunes.