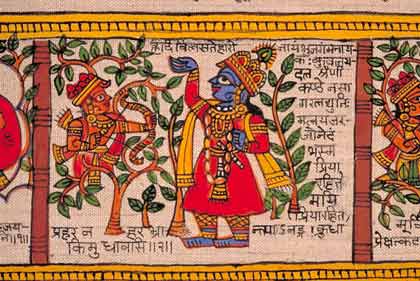 Some say that earth arose from the mantra’s first element, water from the second, fire from the third, air from the fourth, and ether from the final element. One who wishes to attain the kaivalya state of liberation should constantly repeat this Vaisnava mantra, which is uttered in five portions and reveals Krishna.

Even after stating a slightly different opinion regarding the mantra’s secondary effect in regard to creation, Gopala-tapani continues to stress the efficacy of chanting the Gopala mantra with regard to its primary effects of liberation and love of God. Brahma describes it as a Vaisnava mantra. The words kaivalya-srti thus imply “the devotional path by which Krishna is attained.” Although the word kaivalya is quite common in the jnana-marga, it is found infrequently in Vaisnava scripture. The common understanding of the word is repulsive to Gaudiya Vaisnavas. Indeed, Prabodhananda has said, kaivalyam narakayate: “Kaivalya appears like hell.”1 In this case, the understanding of kaivalya that is compared to hell is the liberated status of sayujya, in which there is no opportunity to serve God. In Srimad-Bhagavatam (4.20.23), Prthu Maharaja also expresses his distaste for this kind of liberation, tan isa kaivalya-pate vrne na ca.

According to the Bhagavata Purana, which Gaudiya Vaisnavas consider the ultimate scriptural evidence in support of their ideal, there are five kinds of mukti, four of which involve service to Narayana. Living on the same planet with Narayana (salokya), attaining opulences like those of Narayana (sarsti), becoming a personal servant of Narayana (samipya), and attaining a form like Narayana’s (sarupya) are liberated statuses acceptable to most Vaisnavas. The first three of these involve inward meditation on Narayana, while the fourth, samipya, involves serving in his manifest presence. Thus it is superior. The fifth type of liberation, which involves identification with Brahman (sayujya), is not acceptable to devotees of Narayana in and of itself, although the identification with the Absolute that it involves is included in the other four types of liberation. Devotees of Krishna on the raga-marga, however, find all five of these types of liberation undesirable inasmuch as the desire for any of them is considered an obstacle to attaining love of Krishna, which is marginally characterized as being devoid of the desire for liberation.2

The Srimad-Bhagavatam (2.10.6) also uses the word mukti in a positive sense, meaning not only freedom from implication in the negative plane of karmic involvement but also the positive attainment of love of God, muktir hitvanyatha-rupam svarupena vyavasthitih. There is a gradation in the Bhagavatam’s concept of devotion. At the lower end it entails vaidhi-bhakti, culminating in reverential love of God. The four kinds of Vaisnava liberation are included within this kind of love of God. At the higher end is raga-bhakti, culminating in spontaneous love of Krishna, where reverence is overshadowed by intimacy.

It is noteworthy, however, that the conclusion of Srimad-Bhagavatam (12.13.12) uses the same word, kaivalya, to describe its ultimate goal: kaivalyaika-prayojana. Jiva Goswami argues in Bhakti-sandarbha (1) that true knowledge means to know that one has no existence separate from Krishna. It is ignorance of this relationship that is the source of our bondage in the world. Thus kaivalya does have a devotional application. Indeed, it speaks of oneness in love, the likes of which can only be found in raga-bhakti.

In his Tattva-sutra, Bhaktivinoda Thakura also offers a novel understanding of sayujya mukti for Gaudiya Vaisnavas, one that identifies kaivalya with raga-bhakti. In his comments on sutra 19 he writes, “Sayujya means union with Brahman. Those Vaisnavas who are engaged in the sadhana of the sentiments of the gopis of Vrndavana can also refer to their practice as brahma–sayujya–sadhana.”

The following verses give confirmation of the preceding statements: One should exclusively culture this mantra. Its first segment produced the earth; its second segment, water; its third segment, fire; its fourth segment, air, which carries fragrances; and its fifth segment, sky. By so doing, Candradhvaja went to the supreme imperishable abode of Visnu.

This verse emphasizes exclusive culture of the diksa mantra. We should generally cultivate only one mantra (ekam kevalam mantrabhyasa-matram kuryat). The reason for this is that such culture promotes the kind of single-mindedness (ekagrata) necessary for successful meditation. Through exclusive culture of the Gopala mantra, from which the creation ensues, Siva (Candradhvaja) attained Krishna’s abode.

The five-part mantra is the abode of the completely pure and untainted Supreme, where there is no grief and in which contact with greed and desire have been absolutely defeated. Verily, it is Vasudeva, other than whom there is nothing.

The purpose of this verse is to stress that the mantra, Vasudeva (Krishna), and his abode (Goloka), constitute a single truth appearing in three forms. Goloka is forever free from the influence of the gunas of material nature: sattva, rajas, and tamas. It is the ultimate reality, which is nondifferent from Sri Krishna himself. This plane of consciousness is also known as vasudeva—sattvam visuddham vasudeva-sabditam.3 In this plane of consciousness there is no lamentation, greed, or material desire.

This verse says that other than Vasudeva, nothing exists. This is supported by Sri Gitopanisad (7.19), which states that Vasudeva is everything (vasudevah sarvam iti). This means that the person Vasudeva, replete with his potencies, which are nondifferent from him, is the totality of existence. Reality is a person. He is both majestic and charming. His majesty is such that he is all-pervasive and nothing exists outside of him. His charm is such that he defeats the lust of material desire in general and the charms of Cupid in particular.