The Passing of Aindra Prabhu 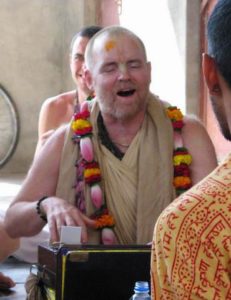 Many, many people, particularly those whose faith he held, could speak volumes about the glories of Aindra prabhu and possibly give us glimpses into the internal life he cultivated. I will not pretend to know much about him. But I, like many, had a few interactions with him, held some appreciation for his convictions, and feel that his passing is a great loss for the Vaisnava community.

My first encounter with Aindra was through his Vrindavana Mellows tapes in the early 90s. In our brahmacari asrama we would listen to them often and learn many of the melodies. In 1995, ’96, and ’98, while in Vrindavana, I was able to participate in several of his kirtanas and associate with some of his kirtana crew. Visiting his room was like stepping into some medieval babaji‘s cave: walls plastered with cow dung, a maha-prasad Tamal tree from the courtyard of the mandira, uncountable salagram silas… And then there was the twenty-first century recording equipment with which he expertly demonstrated yukta-vairagya, working his magic to engineer transcendent sound. I fondly remember gathering with his gang on the veranda outside his room as they belted out a chorus response for his latest recording Prayers to the Dust of Vraja. In that room, the life, the kirtana-rasa, the bhava I had heard in those recordings came alive before my eyes. There were the instruments—the bells that you hear ringing in Mellows recordings, swarmandala, and the ankle bells he wore on his feet as he would pound out rhythm while simultaneously playing harmonium and bellowing forth commanding kirtana… While residing in that tiny little corner of Vraja-dhama, he was broadcasting its environment all over the world.

As a kid I used to sing and play music in punk bands. The art of music is in expressing the passion of the soul. I had an attraction to kirtana because it was the highest, most complete form of self-expression. Aindra’s kirtanas always made me feel self-expressed, feeling the mood of saranagati to Sri Krishna in the form of Sri Nama prabhu. I’ve always felt that just as we consider the consciousness of the chef entering the food that he or she prepares, the mood of the kirtaniya is manifest in their presentation of kirtana. Kirtana with Aindra in Vrindavana was always focused, absorbing, and emotionally rich. You never felt inattentive because his fervor for the name kept you present. He was a master of rhythm and synchronicity. He would bark commands of his intentions in changing the flow. Often he would give a soul-piercing stare, looking like a madman. He wanted you there, in Nama, in congregation. Never for a minute did I feel pratistha in his kirtana.

As I consider what influence he had on my life, I think that what I appreciate the most about Aindra prabhu was his contribution to the diversity of Iskcon. His eccentric nature, unkempt look, crazy brown cloth, his frustration with the status quo, and his nature to periodically boil over and without restraint speak in such a way as to be censured by authority. He was anything but a generic Hare Krishna devotee. He was someone who was prodding his associates, his community, and his gurudeva’s mission to move, progress, advance! Can’t you hear him yelling now?! His “settle for nothing less” sense of urgency was contagious. It is most unfortunate that Iskcon has many times been unable to appreciate or accomodate such diversity, particularly in those fortunate souls like Aindra prabhu who develop an attraction and pursuit of raga-marga and who desire to assist their brethren by sharing their realization. I have it on good authority that Aindra had recently published a book of his realizations. After making an offering at Srila Prabhupada’s tirobhava mahotsava last year, he was once again rebuked and told that if his book was published he would have to leave Iskcon and give up his most cherished sankirtana service. Although he did publish at least one for himself, I have heard that in desiring to keep this service, his thought was that his book would have to wait until after his death to be available to the masses.

It is most tragic that the spiritual progress of an influential person could be seen as a management problem rather than an opportunity for reassessing, re-evaluating and re-prioritizing the purpose of Srila Prabhupada’s mission. Aindra prabhu certainly had some biting words to say in this regard. While some may not agree with his philosophy or his style of presentation, the silencing of dissent, either through threat of excommunication or through the unfortunate demise of the dissenter is most disappointing to those who yearn for truth. Spiritual progress is by nature a highly individualized affair, and its presentation in a worldwide society of varying degrees of adhikara is most definitely a challenge. However, I hope that before facing more of these unfortunate circumstances, Iskcon can learn to at least accomodate, but better yet, to advocate, for the individual development of its membership, considering the accompanying management dilemma only secondarily.

“Humility implies perfect submission to the truth and no sympathy for untruth. A person who entertains any partiality for untruth is unfit to chant the kirtana of Hari.” – Srila Bhaktisiddhanta Saraswati Thakur Prabhupada

73 Responses to The Passing of Aindra Prabhu