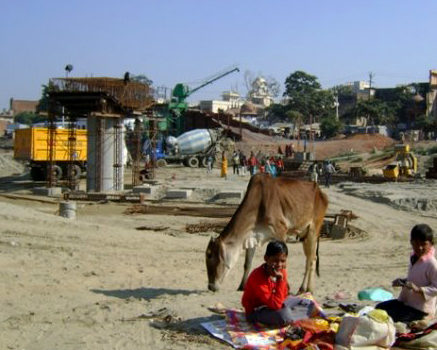 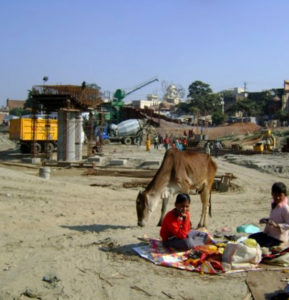 For centuries, this 27-square-mile town on the road from Delhi to Agra has been the holiest of holy places for devotional Hindus. Drums, brass hand cymbals, and the chanting of ancient prayers echo out each morning from Vrindavan’s 5,000 temples.

Yet recent changes such as satellite television, digital phone service, and real estate development have brought this medieval site on the banks of the Yamuna River into the 21st century. Not everyone is happy with the transition.

“It is a painful subject,” says Shrivatsa Goswami, whose family traces its roots to Vrindavan’s 16th-century restorers. “In those days, this place had the most beautiful riverside architecture in India’s history. It was like a miniature painting come alive.”

Goswami notes that previous generations of temple authorities understood the importance of holy places and took responsibility for their maintenance. Today, he says, that sense of stewardship is absent.

“Many religious leaders here have a narrow view,” Goswami says. “They don’t see the universality of their own message. They don’t see how a sacred site such as this can inspire people of all faiths. What they see is commercial opportunities, and the result is garbage and sewage backing up. In a few more years, my own children will not want to come here.”

Beginning in the 17th century, Moguls and other invading forces razed Vrindavan’s temple domes and left the town in architectural ruin. But according to Goswami, the real damage began with India’s independence in 1947. Rather than return to its spiritual roots, the nation became a secular industrial power. India’s cultural heritage in general, and holy places in particular, suffered.

“We are only two hours from Delhi,” says Goswami, “and people are feverishly spending millions to turn Vrindavan into a suburb. Because there is so little appreciation for holy places, developers get away with using the Yamuna as a dump for their construction. Instead of dredging to restore the river’s natural beauty, they have laid a tar road along its banks and in the riverbed to facilitate more traffic. I refuse to walk on it.”

Indic scriptures identify Vrindavan as the place where Krishna, the Sanskrit name for God in personal form, appeared 5,000 years ago. Followers consider Vrindavan as having its genesis in the spiritual world. Devotees consequently worshipped the town as fervently as Krishna himself.

Yet with modernization, the nature of pilgrimage to this holy spot has shifted dramatically. As recently as the 1980s, hardly one car a day arrived here, and there was little to distract from an all-day walking tour of medieval sites. Today, traffic backs up along the newly completed six-lane National Highway. A water park has opened less than seven miles from Govardhan, a hill that is among Vrindavan’s most sacred spots. Near the actual site of Krishna’s appearance in nearby Mathura, Pepsi-Cola has constructed a production plant. Cell phone towers loom up into the sky over temple domes.

“There is a risk of the spiritual experience becoming diluted,” says Braja Bihari, an American scholar who has lived in Vrindavan for 27 years. “Previously, you never saw people playing boomboxes or contaminating the roads with plastic bags. They came here to get away from those influences. The deep, contemplative experience is still available, but you have to work a little harder to find it now.”

Some environmental organizations such as the World Wide Fund for Nature are working to restore Vrindavan through programs of reforestation. Ranchor Prime, the project’s India liaison, notes that ecological values have always played an important role in Hinduism but have suffered in the rush of modernization.

“If the faith leaders brought back their own tradition of cleanliness and respect for nature here, in one of the greatest holy places of India,” says Prime, “it could have a dramatic impact nationwide. Environmental awareness is not a hollow religious sentiment. It makes practical sense.”

Not everyone sees the changes in dire terms. Lokanath Swami, a religious leader from South India, sees an upside to modernization: comfortable facilities attract clients.

“First, people have to want to come to a holy place,” he says. “Then the inner experience can occur.”

Still, he agrees with Goswami’s assessment that leadership must take an active role in protecting the site’s integrity.

“The scriptures tell us that the real pilgrimage is not bathing in a river,” he says, “but taking instruction from the saintly people who make such places their home. And certainly they have an added degree of responsibility.”

Historically, holy places have been the refuge of ascetics seeking escape from the material world. It would take days or weeks to arrive at a holy place. Once there, pilgrims confronted austere conditions that quickly separated spiritual dabblers from the truly devout. Today, the opposite holds true as developers encourage tourism and Vrindavan struggles to adjust, for the first time in history, to market economics. Like many other places of pilgrimage in India, this is a town faced with reconciling its cultural and spiritual purposes with its need for a stronger economic infrastructure.

Even staunch defenders of Vrindavan’s innate sanctity acknowledge the inevitability of modernization and accept, as well, its potential value. From the roof of his art institute, called Sri Caitanya Prema Samsthana, Goswami can see solar panels on buildings in surrounding villages. The panels feed energy to satellite dishes that connect farmers to Hindi-language Internet Web sites, which provide district-specific weather reports, current market prices and tips on modern growing methods.

More than half the residents in the Vrindavan area live off the land, and Goswami acknowledges that the technology could lead to improved quality of life and possibilities for saving Vrindavan from urban blight.

“Spirituality has never been an enemy of science and technology,” he says. “Devotion and knowledge have always gone together. That is the Indian approach. I’m not afraid of laptops and satellites. It is losing the spiritual content of Vrindavan that has me concerned. That cannot be stopped by better technology alone. That can only be stopped if the religious leaders come out of their shells and renew their emotional bond with their own culture and history.”