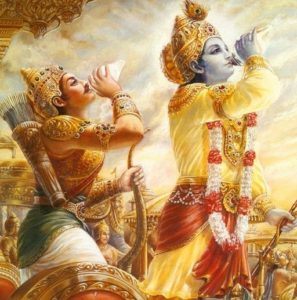 O Krishna! Husband of Rukmini! Stealer of the gopis’ minds! O spiritual master of the universe! Deliver me, for I have fallen into the ocean of repeated birth and death.

Sri Prabodhananda comments, “The word sri preceding Krishna’s name in this verse indicates that he possesses all excellences and that by his beauty he attracts the entire universe.” His beauty is so extraordinary that it casts a spell of attraction on himself. When he sees the effects of his beauty on Radha, he desires to experience it himself through her eyes. Once in Dvaraka, he saw his reflection in a jeweled pillar and found himself irresistibly drawn to it. In Dvaraka, Krishna is the husband of Rukmini, Maha Laksmi herself. Thus in her company he is, in the words of Sri Prabodhananda, “the possessor of the greatest riches and the king of kings.”

Krishna alone is the jagad-guru, or the macrocosmic expression (samasti) of the guru principle (guru-tattva), because he is the source of the knowledge that all gurus disseminate; indeed, he is that knowledge. Whereas Krishna is the samasti–guru, all others who represent him are called vyasti, or microcosmic manifestations of guru-tattva. Thus Gaudiya Vaisnava gurus generally do not adopt the title jagad-guru, which they reserve for Krishna and even more so for Sri Caitanya Mahaprabhu, who is Krishna in acarya-lila, the role of world teacher.

Here Brahma concludes his salutations and in the remaining three verses of the first section of Gopala-tapani gives his final instructions.

In this way I worshiped him with these hymns. Now you should meditate on Krishna in the same way, chanting the fivefold mantra. By so doing, you will cross over the ocean of material existence. Thus Brahma concluded his discourse to the sages.

According to Prabodhananda Saraswati, after chanting the hymns in salutation to Krishna, Brahma became immersed in love for Krishna as the import of his praise penetrated his heart. As a result, the knowledge of how to please Krishna became fully manifest in his heart. Brahma then chanted more hymns not found in the text of Gopala-tapani, which were not only more joyful and filled with wonder, but which revealed his desire to serve Krishna in a particular sentiment. ((Gaudiya commentators differ on which sentiment this is. Most understand it to be the sentiment of manjara-bhava, which is the predominant sentiment of the sampradaya, while others,
such as Srila A. C. Bhaktivedanta Swami Prabhupada, understand it to be that of a gopa, sakhyabhava.
Commenting on ÇB 2.9.30 (yavat sakha sakhyur ivesa te krtah), Srila Prabhupada writes,
“Brahma is definitely situated in the humor of friendship with the Lord. . . . It is clearly exhibited
herein that Lord Brahma is related to the Personality of Godhead in the transcendental humor
of friendship.”)) This is the implication of the word aradha-yami (I worship) in this verse.

Whoever chants the fivefold mantra will easily attain the undivided realm of liberation [described in the Isopanisad]: “The Lord, though fixed in his abode, is swifter than the mind, so none of the gods can capture him, however quickly they may run. He knows all before everyone else.”

Liberation for the devotees (vaisnava-mukti) is here identified with attaining the undivided realm (kevalam padam), Krishna’s abode. Although this is the acme of spiritual accomplishment, the devotee nonetheless easily attains it (anayasatah) because simply hearing and chanting about Krishna with love or without ulterior motive is itself synonymous with such liberation.

The third and fourth lines of this verse also appear in Isopanisad (4), which is another well-known Vaishnava Upanisad. These lines stress the transcendental nature of Krishna and his abode, which are not limited by time and space, being swifter than or beyond the mind. Krishna pervades all time and space and thus cannot be captured, nor can his abode be attained by those remaining within the material cell and sentence of space and time, even if they are gods of this world. In this regard, Sri Prabodhananda refers to the instance in which Krishna revealed his abode to the inhabitants of Vrindavana in response to Nanda’s questions about their next life. In particular he refers to SB 10.28.14–15, verses often cited by Jiva Goswami when he writes about Goloka. ((See Gopala-campu 2.29.80, Bhakti-rasamrta-sindhu 3.4.76, Ujjvala-nilamani 15.3.19, and
Brahma-samhita 5.5 as examples.))

When Nanda heard Varuna praise Krishna, describing him as the Brahman, Paramatma, and Bhagavan of the advaya-jnana-tattva that constitutes ultimate reality, he was astonished. He related this wonderful incident to the cowherd community and later, on their behalf, asked Krishna what they could expect in their next life. Krishna took them to Akrura Ghata, and as they immersed themselves in the water of the Yamuna under his direction, he gave them a mystic vision of Goloka Vrindavana, the heavenly expression of earthly Vrindavana. He revealed to them that they would go from his humanlike lila (nara-lila) to his godly lila (deva-lila), which are essentially nondifferent from one another. They are, that is, constituted of the same bhavas, although there are some differences in the details of the lilas’ expression.

Upon receiving this revelation, the cowherd community was overjoyed to know that they would be together with one another, along with their children, cows, and houses, in a setting much like their present surroundings. The natural environment would be the same as that found along the banks of the Yamuna and at the foot of Mount Govardhana, surrounded by lush forest. Such is the mystery of Krishna’s abode. Intimate involvement with the infinite requires that the infinite take on a finite appearance.

Krishna’s descent (avatara) to the material plane of experience involves the manifestation of all that is dear to him, his svarupa-sakti. His svarupa-sakti represents his singular nature expressed in a plurality of family members, friends, lovers, and so on—expressions in celebration of his own completeness, his delight. The svarupa-sakti is his primary sakti, the fountainhead of all of his innumerable saktis, by which the Absolute expresses itself, even by creating and maintaining the world in all of its facets. For example, the sakti involved in sustaining the world has its origin in Krishna’s svarupa-sakti in the form of his divine mother, Yasoda. She is a manifestation of his adhara-sakti within the general category of his svarupa-sakti. ((Adhara-sakti is a subcategory of the sandhini-sakti, which is one of the three principal constituents of the svarupa-sakti.)) What we know as the sustaining force has at its source a personified expression of motherhood in the drama of Krishna lila, where the person who is reality plays. When this divine play manifests within the material plane, we have an instance of the cause appearing within the effect and, in doing so, appearing in many respects as an aspect of the effect.

Transcendence is generally considered the result of culturing detachment. Attachment to ephemeral material names and forms on the part of one who is eternal is illusion. When we stand back and view the material predicament with the unbiased eye of detachment, we get a clearer picture of the nature of material existence. We see that all material manifestations are here today but gone tomorrow. Only that which sees remains, not that which is seen. Yet the seer does not see himself in all of this, and thus his identification with the seen leaves him in a perpetual identity crisis life after life, as one material manifestation transforms into another. Thus ignorance is attachment, and knowledge expresses itself in detachment.

How then are we to understand the attachment of the cowherds for Krishna, for one another, for their hearth and home? How can this be the acme of transcendental experience? The answer lies in distinguishing between knowledge and love. While knowledge expresses itself as detachment, love is about attachment. Is love, then, necessarily material and only knowledge the domain of the spirit? If this were so, the domain of the spirit would hardly be a home, but more like a peaceful state of hovering in suspended animation.

However, if we look more closely at knowledge, we will see that love is concealed within it. Refraining from lustful exploitation of our partner is also an expression of love, even though all the overt signs of loving affection may be absent. Similarly, the seed of love is concealed within the transcendental knowledge that arises from a life of insightful detachment and spiritual practice. It will manifest in the pure hearts of the truly wise when they interact with the world in knowledge of its proprietor. Such healthy interaction finds all material manifestations venerable in relation to their source. All problems are transformed into opportunities for service, which is the basis of true love. The ongoing cultivation of this love of God in the company of advanced devotees involves seeing everything in relation to him and results in meeting him on intimate terms. This result is played out in perfection within the drama of Krishna lila, where forms and relationships are all expressions of the will of Krishna—his delight manifesting through his svarupa-sakti.

Thus Goloka, Krishna’s abode, is beyond time and space. Although Krishna himself resides there forever fixed, never stepping foot outside, he is at the same time moving faster than the mind and thus is never to be apprehended by any mental or intellectual exercise. Stop the mind and allow the soul to live its own life—the life that Krishna alone knows is best for you in his service. That which is known to him, he will reveal to you and it will manifest in your heart purified through spiritual culture as if it were your own desire to associate with him on intimate terms as a member of the cowherd community. Such enlightened life is transcendental bewilderment in which the godhood of Krishna is suppressed by the bond of intimate love. When in such bewilderment (yogamaya) Nanda asked Krishna about the cowherds’ next life, he showed them, to their delight, that it does not get any better than this—life in Krishna lila.