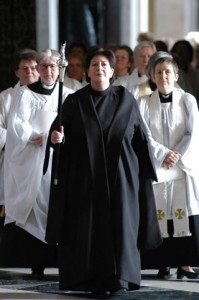 Barring women from being Catholic priests is not the result of sexism 2,000 years ago, it’s because women cannot fulfill a basic function of the priesthood, “standing in the place of Jesus,” a leading British Catholic thinker argued Monday.

“This teaching is not at all a judgment on women’s abilities or rights. It says something about the specific role of the priest in Catholic understanding – which is to represent Jesus, to stand in his place,” argued Father Stephen Wang in a statement sent out by the Catholic Bishops Conference of England and Wales.

It’s rare for the Catholic Church to defend its fundamental positions in this way.

Wang was responding to the announcement that campaigners for female priests will plaster posters on London buses next month during the pope’s visit to London.

The ads read “Pope Benedict – Ordain Women Now!” and will be on 15 double-decker buses running in some of London’s main tourist areas, including Parliament and Oxford Street, said Pat Brown, a spokeswoman for Catholic Women’s Ordination (CWO).

Wang rejected both the tone and the content of the ads, saying that while an atheist ad campaign last year was “hesitant and ended with gentle exhortations,” this one ends “with a shout.”

And it’s based on a fundamental misunderstanding, said Wang, the dean of studies at London’s main seminary for Catholic priests, Allen Hall.

Pope John Paul II declared in 1994 that the church has no authority to ordain women, a position confirmed a year later by Cardinal Joseph Ratzinger, who is now Pope Benedict XVI. At the time, Ratzinger was the head of the Congregation for the Doctrine of the Faith, the arbiter of Catholic Church dogma.

Wang called the late pope’s position “surprising,” saying John Paul had meant he did not have the power to change “something that has been such a fundamental part of Christian identity from the beginning.”

The bottom line is that Jesus chose 12 men – and no women – to be his apostles, Wang argues.

The choice was “deliberate and significant, not just for that first period of history, but for every age,” Wang says.

Men and women are equal in Christianity, he continues, but “this does not mean that our sexual identity as men and women is interchangeable. Gender is not just an accident.”

He compared the role of a priest to that of an actor playing King Arthur or British soccer star Wayne Rooney in a movie.

“No one would be surprised if I said I wanted a male actor to play the lead,” he said, admitting the analogy was “weak.”

But, he said, “it shouldn’t surprise us if we expect a man to stand ‘in the person of Christ’ as a priest, to represent Jesus in his humanity – a humanity that is not sexually neutral.”

The Catholic women’s group says that in addition to its bus campaign, it plans to hold a vigil September 15, the day before the pope’s visit, outside Westminster Cathedral.

The group also plans to demonstrate at Lambeth Palace, the official London residence of the Archbishop of Canterbury – the head of the Church of England – during his meeting with the pope.

And members plan to hold a banner along the route of the popemobile, the secure vehicle which carries the pope, in London.

Pope Benedict plans to visit England and Scotland September 16-19. It will be the first state visit to the United Kingdom by a pope, according to the British Foreign Office. John Paul’s trip in 1982 was officially a pastoral visit.