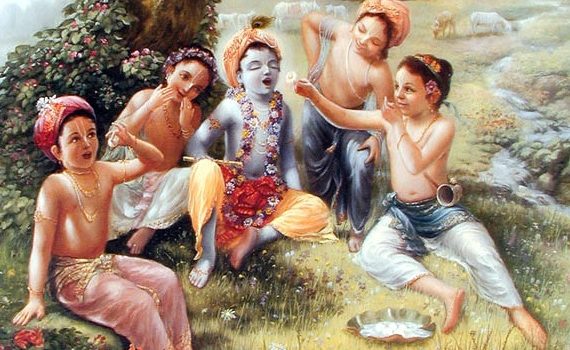 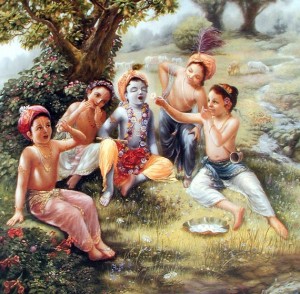 A. Paramatma means the Supreme Soul, so the term is interchangeable with all forms of Godhead, but in Gaudiya theology it is used mostly to refer to the Purusa incarnations of God that preside over material nature. These incarnations are Maha-Vishnu, who manifests the individual universes; Garbhodaksayi Vishnu, who manifests the planets and beings within each universe; and Ksirodakasayi Vishnu, who pervades everything within the universes and who in Srila Prabhupada’s words is known as the collective Paramatma of all beings.

These Vishnu incarnations control the act of creation (sristi-lila), which involves the expanding and contracting of unlimited universes over and over again into eternity. When the universes contract, the nonliberated jivas who remain enter into the body of Maha-Vishnu in collective homogeneous rest. This condition, which is called sususpti, is what Srila Prabhupada refers to when he writes, “Since He (Paramatma) sees even the abode where the collective living beings rest, he is the original Narayana.”

Here Srila Prabhupada is identifying the Purusa incarnation Maha-Vishnu with Narayana, the Lord of the spiritual world (Vaikuntha), as Maha-Vishnu is an expansion of Bhagavan Narayana. Thus in a broader sense Narayana is also known as Paramatma, “the Supreme Soul,” thereby differentiating God and his incarnations from the infinitesimal jivatmas, or individual souls. In santa rasa, or eternal adoration of the beatific vision of the Godhead, the devotee’s object of meditation is Paramatma Narayana. That is to say that the Paramatma envisioned within the heart of the yogin is manifest as Bhagavan Narayana in Vaikuntha, or as Sri Krishna in Goloka. In the Bhagavad-gita, the astanga yoga mixed with bhakti described in chapter six aims at this realization. In either case, the verse that you cited from Caitanya-caritamrta tells us that the Supreme Soul, Paramatma, is in one form or another always with the individual soul in all situations, transcendental and material.

However, we Gaudiya Vaishnavas are not interested in the santa rasa vision of Paramatma; attaining Vaikuntha, the abode of Narayana; or even in seeing Sri Krishna as the Supreme Soul. Our Caitanya Mahaprabhu came to distribute the four predominant rasas of Vrindavana, dasya (servitorship), sakhya (friendship), vatsalya (parental affection), and madhurya (conjugal love). In all of these rasas, Sri Krishna is the object of love, not the Paramatma or Narayana, and he is experienced not as the Supreme Soul but in intimacy as the son of Nanda, Nanda-tanuja, whereby his Godhood is obscured. Indeed, Gaudiya Vaishnavas replace the Paramatma in their hearts with Syamasundara as their eyes become tinged with the salve of love for Krishna, yam syamasundaram acintya guna svarupam. Sri Caitanyadeva speaks of this in the fourth verse of his Siksastakam, where he bids farewell to the Paramatma and the realm of his jurisdiction, filled as it is with material desire, and in the Paramatma’s stead embraces the God (isvara) that one worships in ahaituki (pure) bhakti—mama janmane janmanisvare bhavatad bhaktir ahaituki tvayi. This isvara is the prana isvara of the followers of Sri Caitanya, the Deity of their life breath in eternal unalloyed bhakti, svayam bhagavan Sri Krishna, the son of Nanda.

Q. In Srila Prabhupada’s purports there are many references to various Vishnu forms, such as Karanodakasayi, Garbhodakasayi, and Ksirodakasayi. Are there any verses in scripture that mention these forms by name?

A. The avataras of Vishnu you mention are referred to collectively in Srimad-Bhagavatam (1.3.1) as the Purusa incarnation. They are expansions of Narayana, who is a manifestation of Sri Krishna. This is confirmed in Srimad-Bhagavatam (10.14.14), where Narayana is described as an angam, or plenary portion, of Sri Krishna. Furthermore, the Bhagavatam tells us that the avataras of Vishnu are countless (asankhya). The Siddhartha-samhita describes twenty-four forms of Vishnu/Narayana, which are distinguished by the particular placement of his conch, club, disk, and lotus flower in his four hands. Details on this can be found in the Adi-lila of Caitanya-caritamrta, where the Purusa incarnations are referred to by name (Cc. 1.2.49). Therein, Sri Caitanya instructs Sanatana Goswami, among other things, about the various forms of Vishnu. See also Sri Rupa’s Laghu-bhagavatamrta.

However, the significant point that our Gaudiya acaryas seek to make in mentioning all these expansions and incarnations is that Krishna is svayam Bhagavan, the fountainhead of all forms of the Godhead–ete camsa kalah pumsah krsnas tu bhagavan svayam. We should come away from these descriptions with this understanding if we have studied the scriptures well. Our task then is to focus our attention on Krishna such that we see all other manifestations of God in light of the love we are cultivating for him. This also includes how we respect the devas, or demigods.

Q. I read that Sadasiva was manifest by Krishna at Vamsivata. When Krishna desired to perform rasa-lila for the first time, Sadasiva, as Gopiswara Mahadeva, is said to have manifested from his right side. Can you elaborate on this?

A. I do not know of any scriptural references for this, but the idea has merit. Rasa lila requires a gatekeeper, but not just anyone can take this post. It must be taken by a gopi and then a special gopi at that. Siva’s desire to taste gopi-bhava is often described as the origin of his form as Gopisvara, and it is in this form that he guards the rasa-lila as the gatekeeper. The Bhagavata explains that Radha-Krishna is the origin of the adi rasa of romantic love and that the world flows forth from this adi rasa, wherein the singular Absolute becomes plural. So if we look at the origin of the world from this perspective, where does Siva fit in? Shakti stands to the left of shaktiman; this is Radha’s position. On the right, we find the alter ego of Krishna as Balarama; from him comes Sankarsana, Mahavishnu, and with his glance the world is animated. The semblance of this glance is Sambhu, Siva. So Siva is connected to the right side of Krishna and Radha to the left. But that is the best I can do to lend support to this idea. Again, I do not know of any scripture that speaks directly about Siva manifesting from the right side of Krishna at the dawn of creation, but I would not be surprised to find such a statement.

Q. In The Poetic Love Life of the Absolute, you wrote that Krishna lila is neither myth nor allegory. Considering that the Bhagavatam contains both myth and allegory, isn’t it important to know what Krishna lila actually is? Is Krishna lila exclusively the pastimes of Krishna in Vrindavana with the cowherd boys and girls, or are the activities of all of Krishna’s incarnations considered to be Krishna lila? Is it actually possible to clearly delineate what constitutes Krishna lila?

A. Lila, or divine play, is a philosophical/theological necessity arising out of metaphysical worldviews, such as Sri Caitanya’s acintya bhedabheda, as well as other Vaishnava interpretations of revelation/Vedanta. Lila also plays a prominent though secondary role in Advaita Vedanta, where the divine play of Godhead is said to be a manifestation of ultimate reality in this world that does not endure in liberation.

The Bhagavata itself is decidedly theistic and embraces a post-liberated life of participation in lila with God as its end (prema prayojana), thus it was firmly embraced by Sri Caitanya. Although Krishna lila as depicted in the text represents an impression of the nature and basic structure of his transcendental lila, it at the same time represents an approximation of the lila, for Krishna lila lies beyond the scope of thought and language. Suffice to say that God plays. God celebrates himself and thus dances out of fullness. The nature of his static (unchanging/passive) reality is that it is simultaneously dynamic (active). Thus in various forms, his reality overflows into the world of our experience, and sacred texts such as the Bhagavata try to capture and relate to us the essence of that expression. While Krishna lila refers specifically to the romantic, carefree life of svayam Bhagavan, in a broader sense it refers to all forms of divine lila on the part of the various Vishnu avataras. Allegory may play a role in describing such divine expressions, but the lila itself is an ontological reality.

However, most important in all of this is entering the flow of the lila oneself. Dhara means stream, and the name Radha, in which the same syllables are found in reverse, implies that the stream of love of God flows two ways: from Bhagavan to bhakta and from bhakta to Bhagavan. Bhagavan is the ocean of rasa and the bhakta is a drop, which the stream of love–best exemplified by Radha–connects to the ocean of rasa. Love, giving, is at the heart of lila. Give yourself and try to enter the stream of love–Radha Bhagavatam, Srimad Bhagavatam. Taking the description of lila in the text literally may be helpful in this pursuit, in bhajana. No harm. Our interest is in jnana sunya bhakti, bhakti unencumbered by knowledge or the need to know, and for that matter, to love is to know in the full sense of the term.