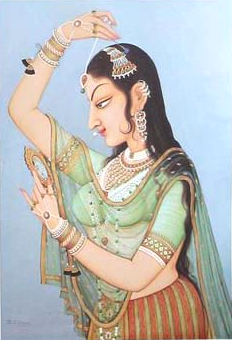 Verse 48 of the purva tapani:

Therefore, Krishna is the Supreme Deity. One should meditate upon him, one should relish him, and one should engage in his worship with a desire to serve. Om tat sat.

This Upanisad began with the question, “Who is the Supreme Deity?” In consideration of all that has been discussed thus far, Sruti-devi makes the learned conclusion: Krishna is the Supreme Deity. What follows logically from this conclusion is that one should meditate on him and thereby relish him in aesthetic rapture (rasa), the foundation of which is the service ego.

The words om tat sat designate the supreme reality and serve here as a solemn declaration in his name that everything stated in this Upanisad is the absolute truth.

Once the passionate cowherd women of Vraja spent the night with the cowherd Krishna, who is the Supreme Lord of all. In the morning, they engaged in a conversation with him as follows:

In the first part of this Upanisad, the purva-tapani, the goddess of revealed knowledge, Sruti-devi, states that Krishna is the Supreme God. The purva-tapani ends with the words tasmat krsna eva paro devah: “Therefore, Krishna is the Supreme Deity.” Here in the uttara-tapani, the second part of this Upanisad, the goddess seeks to further demonstrate this truth. To that end she recounts another narrative, beginning with a conversation that once took place between Krishna and the milkmaids of Vraja, the gopis.

In the uttara-tapani, we dive deeply into the mystery of spiritual love. The primacy of Krishna, his devotees, residence, mantras, and more will be explained through the medium of Sruti-devi’s narrative. The gopis will question Krishna, and Krishna will answer them and direct them to the sage Durvasa for further instruction. Durvasa will answer questions asked by the gopis’ group leader, Gandharvi, and in so doing narrate the history of his own conversation with Brahma and Brahma’s discussion with Narayana.

In these opening sentences, the scene for this narrative is set. It is the morning after one of Krishna’s nightlong trysts with the gopis in the forests of Vrindavana. The word usitva indicates not only that the gopis had spent the entire night in Krishna’s company but that they desired these lilas with him to be constant and uninterrupted. Just as young girls are spontaneously attracted to young boys and any impediment put in the way of their union serves only to intensify their desire to be together, the gopis were similarly endowed with the spontaneous desire to be united with Krishna. Although such desire on their part superficially appears to be the antithesis of desirelessness, it is in fact completely devoid of self-interest. The gopis approached Krishna with the intensity of young girls who have fallen deeply in love, and no one so passionate about God can remain attached to the ephemeral.

Drawing from the world of our experience, Sruti-devi speaks to us about the measure of the gopis’ love with a word intended to help us understand its all-consuming nature: sa-kamah. Sa–kamah means “with passionate love.” A more compelling force to compare their spiritual intensity to is not to be found in this world. It is passionate yet desireless love that corresponds to the Absolute’s appearance as an adolescent cowherd—the Supreme Deity. He is supreme in terms of charm and affection, his power implied in his freedom to play. Krishna is the infinite uniting in love with the finite, appearing as if finite for the sake of intimacy.

[The gopis said:] To which brahmana should food be given?

The gopis appear to be uneducated village girls. On the surface they are religious, superstitious, and above all, human. Here they ask a religious question of their young lover, the cowherd Krishna. They want to know which brahmana, or saintly person, in their village is most worthy of receiving an offering of rice boiled in milk and sugar. Their objective is not overtly spiritual. They want a benediction. They want Krishna as their husband, even though this is not acceptable in religious society. They are, after all, already married—or so it seems.

The lila of Krishna is, however, not what it seems to be on the surface, for he is no ordinary cowherd but rather the grave subject of the Upanisads. He is Brahman in its fullest expression, full in love and affection, full in aesthetic rapture (rasa), a connoisseur of love. He is rasa—raso vai sah. Krishna’s devotees like the gopis belong to him alone; indeed, nothing exists outside of him. He is reality existing for himself and by himself. He and his energy, his sakti, are one and different simultaneously. The gopis represent his sakti, and they energize him such that the “one” appears as “many,” a unity of multiplicity. The gopis’ desire to be perpetually in his company is part of the drama of his divine play.

Nothing is separate from Krishna at any time, yet within the drama of material life, units of consciousness that are particles of his sakti can be unaware of their connection with him. Through spiritual culture they can become aware of their real position as parts and parcels of the whole and unite with him in celebration of this truth. This celebration expresses itself in endless varieties of eternal pastimes through which Krishna tastes his own joy in relation to his devotees/saktis. In this spiritual drama, the gopis sometimes meet personally with Krishna and at other times experience the spiritual illusion of separation from him. Touching both banks of the river of divine love as they flow spontaneously in love’s embrace, the gopis and Krishna relish the shores of union and separation.

The gopis represent the pinnacle of spiritual culture. Their selfless love takes center stage in the love life of the Absolute. Yet in appearance they seem to be nothing more than religious girls who are not even all that good at following the religious injunctions. Appearances aside, the philosophical truth underlying their question is that they want nothing other than to be united in love with Krishna, the Supreme Brahman, at every moment. To that end they engage in various religious acts. Thus while they worship others (brahmanas, gods, and goddesses) within the lila, their religious ideal transcends anything that can ordinarily be attained by such worship, and they themselves have already attained that ideal. Experiencing God as Krishna, the young cowherd, they are fully immersed in apparently ordinary religious life with human shortcomings, when in reality they have attained the zenith of spiritual experience.

The esoteric message of the gopis’ question is that one can be fully immersed in the world but with different motives than those of the illusioned beings who pursue various material desires. The gopis interact with the world only out of love for Krishna. The result of such Krishna conscious immersion in the world is the realization that enlightened life is not about running away from or denying the world but fully participating in it with the proper motive—being in it but not of it. After all, there is really no place else to go. Spirituality is about changing our angle of vision.