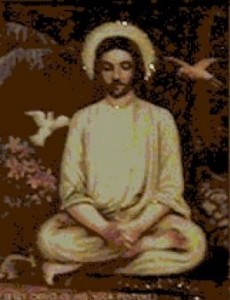 By Philip Goldberg
In a widely circulated blog last week, Reverend Albert Mohler, the president of the Southern Baptist Theological Seminary, took aim at yoga. “When Christians practice yoga,” he wrote, “they must either deny the reality of what yoga represents or fail to see the contradictions between their Christian commitments and their embrace of yoga.” The essay got attention, but it’s really just the latest variation of an old story. In fact, Mohler is practically ecumenical when compared to some of his predecessors.

Conservative Christians have been issuing lurid warnings about contamination from the East for more than a century. Back in the 1890s, Swami Vivekananda, the first Hindu leader to make a splash in the U.S., was mercilessly assailed on his Midwestern speaking tour. In newspaper exchanges that would have made for great TV had the technology existed, the erudite Vivekananda gave as good as he got, blasting Christian arrogance and winning the hearts and minds of open-minded Americans in the process. Throughout the first half of the 20th century, the gurus and yoga masters who trickled into the West were greeted with alarm by xenophobes and self-appointed defenders of womanhood. Articles like “American Women Going after Heathen Gods” stoked fears of innocent maidens being seduced by dark-skinned pagans. In 1911 a broadside titled “The Heathen Invasion” claimed that yoga “leads to domestic infelicity, and insanity and death.” Come the late 1960s and early 1970s, a tidal wave of popular gurus attracted followers and were accused of doing the Devil’s work. In 1975, for instance, when Maharishi Mahesh Yogi appeared on Merv Griffin’s talk show (the Oprah of its day), protesters outside the studio carried signs like, “Jesus Is the Lord, Not Maharishi.”

Now the anxiety is directed at what has aptly been called modern postural yoga. Fifteen to 20 million Americans attend yoga classes each year, and naturally most of them are from Christian backgrounds. On top of that, several varieties of Christian Yoga have cropped up. This has caused consternation and sometimes alarm among certain clerics; Reverend Mohler apparently is one of them.

I can’t help thinking: What are they afraid of? Are they that insecure? Do they think so little of their flock as to fear that they’ll convert to Hinduism because they chant some Sanskrit mantras, or say “Namaste” instead of goodnight, or hear some tidbits of Vedic philosophy while stretching? Non-Christians absorb through osmosis countless doses of Christian theology just by living in America. We sing Christmas carols like they’re pop tunes. Yet, despite the relentless exposure, there is no sign of mass conversion. One is tempted to tell worried Christians to calm down with a few forward bends and some alternate nostril breathing.

What makes the fear of stealth Hinduism especially bizarre is that the ancient tradition has never even entertained the concept of conversion. Every Indian teacher who made a mark in America has presented his or her teachings as more of a spiritual science than a religion — something students can try on for size and adapt to their own lives as they see fit, whether for secular self-improvement or as a spiritual practice that need not interfere with their own religions. This is, of course, especially true of contemporary yoga, which most students see as a fitness or wellness regimen and many find compatible with their various spiritual orientations.

4 Responses to Yoga: The New Antichrist