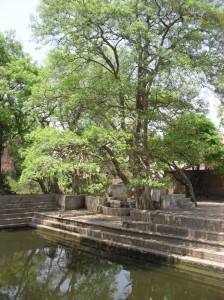 The Braj Vrindavan Heritage Alliance held its latest meeting on Sunday under the Tatia Sthan trees. This sacred place of bhajan, which preserves the ancient mood of the forest kunj, was a most suitable location for discussing the future of the Vrindavan environment.

Tatia Sthan is the site of Haridas Swami‘s bhajan and his worshipable deities and samadhi mandir are there. Old traditions are tenaciously kept, and we were not even allowed to hang our banners on the trees out of respect for them.

With the presence of all the renounced Vaishnavas from the ashram, the meeting was well attended. It was initiated by the singing of several Haridasi songs, which cast their magic over the audience and set the tone for the meeting.

Madhumangal Shukla opened with a brief introduction to the BVHA, its purpose and its accomplishments to date.

Shrivatsa Goswami was the first speaker. He recounted how Radha wears a blue cloth, and Krishna a yellow one. When yellow and blue come together, they mix to become green. Similarly the union of Radha and Krishna is represented by the greenery of Vrindavan dhama.

In previous times, he said, sadhus would come to Vrindavan and plant a garden of trees and creepers around their cottage to create an atmosphere conducive to devotional practices and remembering Radha and Krishna. Now they build a concrete guesthouse surrounded by walls, and it is as likely as not that there will not be a single bit of greenery in it. If Vrindavan becomes a concrete jungle, how will smaran of the Yugal Sorkar be possible?

Shrivatsaji continued, “Vrindavan thus currently faces two dangers: gross (sthūla) and subtle (sūkṣma). This Tatia Sthan has a tradition of venerating the Yamuna, the Vraja dust, which they smear over their faces, and the trees and creepers of Vraja, whom they consider to be sakhis of the Divine Couple, witnessing and serving the nitya-vihāra.

“All of these are currently in danger. The Yamuna is so polluted that it can no longer be used for puja of Radha Raman as was customary in the past. Yamuna Maharani is the queen of Vrindavan, encircling the town on three sides, giving her protection. If she is sick and dying, then what will happen to the dhama?

“The ground is being covered with concrete and garbage. And the trees are being cut down at an alarming rate. These are the external attacks on the Dham. But the end result is an attack on the very essence of Vrindavan, the true and original spirit and mood of the worship of Radha and Krishna. This is what is in danger of being lost. And we must do everything we can to preserve the sweetness of that mood.”

Swami Ramdevananda, who also has an ashram along the Parikrama Marg, lamented the degradation and especially the tree-cutting that has almost completely destroyed the beauty of the sacred pathway. He added that since the Tatia Sthan had managed to preserve its atmosphere, the sants here should offer their guidance to the rest of the community.

Hitakinkar Shri Sewak Sharan, in many ways the godfather of the environmental and heritage preservation movement in Vrindavan, briefly recalled that it was in Tatia Sthan 28 years earlier that the first attempts to draw attention to the degradation of the environment and sound the alarm were made. “The situation has had to worsen so much in the last few years,” he said, “for more people to start becoming aware. But the will to act with a strong and unified voice is still unfortunately not there.”

A.K. Nayak, a retired judge and professor of law from Kolkata, expressed his appreciation for the Alliance and said that Hindu culture was born in forest hermitages and not in cities. “Unless this forest atmosphere is preserved, the entire Hindu culture is threatened, he said.

Swami Bhakti Alok Paramadvaiti Maharaj spoke emotionally of the contamination of the Yamuna water and how it was slowly poisoning the ground water throughout Vrindavan. “The possibility for disease and deleterious health effects are too great to be ignored,” he said.

Paramadvaiti Maharaj especially criticized the district administration for pushing a huge amount of refuse into a standing pond and covering it with earth to make a parking lot at the time of the Kumbha Mela, despite offers he and Shrivatsa Goswami had made to pay for and manage the relocation of the trash to the official municipal dumping ground.

“Furthermore,” he added, “The building of the new drainage system around the town will lead to even further pollution of the water as it simply dumps even more excrement into it.”

The meeting concluded with a short statement from Tatia Sthan mahant Radhika Sharan Dasji Maharaj. He said that Tatia Sthan would give its full cooperation, but made the demand that other ashrams and temples in Vrindavan stop using plastic plates and bags. He also added that the purity of spiritual practices was also a necessary element in the preservation of Vrindavan dhama. If devotional practices are pure, no one will be able to destroy the Dham.

4 Responses to Stop External and Internal Threats to Vrindavan