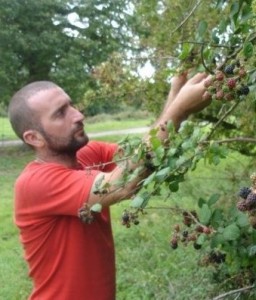 Mark Boyle is a hard guy to get in touch with. Living out of a yellowed trailer permanently cinder-blocked on a patch of farmland, somewhere between Bath and Bristol, the 31-year-old Brit rarely turns on his mobile phone. He doesn’t frequently answer email either. His communication devices — lifestyle compromises that serve the greater good of his mission — are powered by an old solar cell and the shy English sun that only occasionally shines upon it.

If Boyle’s off-the-grid lifestyle isn’t totally unique among today’s Burning Man fanatics and Freecyclers, his background and level of commitment are one-in-a-million. The author of a popular book and founder of the Freeconomy, an online social network with nearly 25,000 members, Boyle hasn’t spent a dime for more than a year-and-a-half.

He doesn’t hate money, he says, but, he definitely doesn’t like it. “I’m completely neutral,” Boyle says, when asked if the sight of money makes his insides churn.

The seed for his aversion to cash was planted during six years studying economics, followed by a brief career managing organic food companies — a half measure towards a better world, Boyle says. “Freeconomics” sprouted into a passion one day at the local pub in 2007. It was then, chatting with a friend, that Boyle made a commitment to abandon currency.

“Money keeps us separated from the consequences of what we consume,” he says. Because of cash, “we don’t see factory farms, we don’t see the sweatshops where clothes are made, we don’t see the pesticides that we spray all over our food,” Boyle says over the phone, as a faint beeping indicates the device is about to die. “All money does is disconnect us.”

Going totally moneyless and spreading the word came in fits and starts for Boyle. His cause first gained widespread attention in early 2008 during a failed attempt to trek without money from Britain to India. Intended as a 9,000-mile journey that would take two-and-a-half years, the trek ended after less than a month when misunderstanding and natural human distrust scuttled Boyle’s dream in northern France.

“Not only did no one not [sic] speak the language,” Boyle wrote in a Feb. 24, 2008 blog entry of the residents of Calais, “they also seen [sic] us as just a bunch of freeloading backpackers, which is the opposite of what the pilgrimage is really about.”

Freezing, starving and emotionally downtrodden, Boyle decided to return home. Boyle announced his decision to the “Freeconomists” following his journey online. “I have touched money to get back [to the UK] and I want you all to know that,” he wrote. “But that has happened and I can’t change that now. All I can do is make a resolution to not be so weak in the future.”

The resolution became real in November 2008 as Boyle embarked upon a “Buy Nothing Year,” just two days after a Walmart employee was killed in a stampede of customers on the first day of the Christmas shopping season. That “Buy Nothing Year” is now just a few months away from becoming a “Buy Nothing Two Years.” Boyle suggests it will go on even longer.

2 Responses to The Moneyless Man