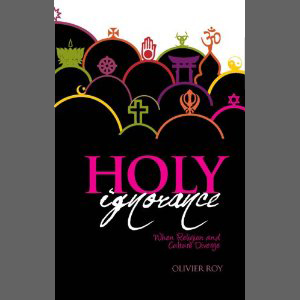 Every winter Fox News, seeking to stir up anger through the land, uncovers evidence of a war on Christmas. Secular humanists ignorant of religion and hostile to its traditions, someone in the studio will declare, want us to say “Happy Holiday” or give Kwanzaa equal standing. But Christmas, as its name suggests, is about Christ. These enemies of Christianity will stop at nothing to get their way. Not even Santa Claus is sacred to them.

Actually, as the brilliant French social scientist Olivier Roy points out in “Holy Ignorance,” it is those defending Christmas who are not being true to their traditions and teachings. There are no Christmas dinners in the Bible, which is why America’s Puritans, strict adherents of what that venerated text offers, never sat down by the raging fire awaiting St. Nick; indeed, they briefly banned Christmas in Massachusetts.

Yule as we celebrate it today owes more to Charles Dickens than to Thomas Aquinas. Our major solstice holiday is what Roy calls a “cultural construct” rather than a sectarian ceremony, which explains why Muslims buy halal turkeys and Jews transformed Hanukkah into a gift-giving occasion. Mistakenly believing that Christmas is sacred, those who defend it find themselves propping up the profane. The Christ they want in Christmas is a product not of Nazareth but of Madison Avenue.

Over the past few years, a number of theories have been offered about the rise of fundamentalism. Roy proposes the most original — and the most persuasive. Fundamentalism, in his view, is a symptom of, rather than a reaction against, the increasing secularization of society. Whether it takes the form of the Christian right in the United States or Salafist purity in the Muslim world, fundamentalism is not about restoring a more authentic and deeply spiritual religious experience. It is instead a manifestation of holy ignorance, Roy’s biting term meant to characterize the worldview of those who, having lost both their theology and their roots, subscribe to ideas as incoherent as they are ultimately futile. The most important thing to know about those urging the restoration of a lost religious authenticity is that they are sustained by the very forces they denounce.

Two tectonic shifts have produced the gap that fundamentalism fills. One concerns the question that has dominated the sociology of religion for more than a century: Will faith decline as modernity advances? The great thinkers of another era — Karl Marx, Émile Durkheim and Max Weber — believed that in one way or another it would. Today’s leading sociologists point to Jerry Falwell and Osama bin Laden to claim that it will not. Roy stands with yesterday’s giants. It is true, he concedes, that conservative religion is growing. But any talk of a religious revival is “an optical illusion.” Religion, he writes, “is both more visible and at the same time frequently in decline.” It cedes so much to the secular world that it can no longer offer a transcendental alternative to it.

We are, in addition, witnessing the severing of religion from the cultures within which it was once embedded. Religion and culture have long existed in an uneasy embrace. Catholicism is presumably a universal faith, yet long before the reforms of Vatican II allowed Mass to be celebrated in the vernacular, Brazilian Catholicism owed as much to its South American roots as Polish Catholicism did to its Eastern European ones. Islam sought to conquer the world, or as much of it as it could, yet it was intimately connected to the Arab culture in which it was born. The only reason we do not find the term “secular Jew” puzzling is because we appreciate that Judaism is both an ethnic and a religious category. Much the same can be said for many of the other world religions, including Hinduism and Buddhism.

If religion is in decline in the modern world, Roy argues, so is culture. On the one hand, we have multiculturalism, celebrations of diversity that somehow wind up making all cultures look and feel alike. More important, we face globalization, today’s true universal faith, which subjects all local customs to the laws of the market. Under the influence of both, religion loses whatever affinities it may once have had with the cultures that sustained it. Jakarta, the capital of the world’s largest Muslim country, lies some 5,000 miles from the holy city of Mecca, and even Mecca, Roy argues, has lost much of its specifically Arab character.

Japanese pilgrims travel to San Francisco to find a more vibrant Buddhist culture than Tokyo can offer. Mormons, no longer confined to Utah, find adherents in Manila. Even the Christian Orthodox churches that are defined by their countries of origin lose their ethnic character; significant numbers of adherents to Orthodoxy in France have refused to come under the authority of the Russian patriarch.

Culture’s stickiest component is language. When the word of God was literally expressed in words, language inhibited religious expansion; preachers could speak only to those who understood what they were saying. With the rise of Pentecostalism, one of the fastest-growing religions in the world, followers are encouraged to speak in tongues, which requires no language at all. Meanwhile television and the Internet contribute to fundamentalism’s appeal; both make it possible for Egyptian imams (preaching no doubt in “globish,” the pidgin form of English that emerges wherever globalization takes root) to reach their followers in Europe. One does not know whether to be in awe of faith’s capacity to adapt or distraught by the hodgepodge that enables it to do so. “The Holy Spirit,” Roy writes, “is anywhere and everywhere. There is no need to have a real rock on which to build the Church.” God only knows what St. Peter would make of that.

Roy’s “Failure of Political Islam,” published in French in 1992 and English in 1994, infuriated those who viewed radical Islam as the major enemy of the West. Roy maintained in that book that Islamism, the perversion of Muslim faith into a utopian political movement, had little to offer ordinary Muslims and would therefore be unable to remain in power very long. (In subsequent work, Roy argues, I believe convincingly, that the ideology currently governing Iran or motivating Hamas has more to do with nationalism than with religion.) This is not a point of view that sits well with those who consider something they call Islamofascism the greatest threat to the West since Hitler. But Roy knows Islam (and Islamism) inside out. It is a shame that his views did not receive the attention in the United States given to those of Bernard Lewis, whose more belligerent take on Islam helped persuade the Bush administration to invade Iraq.

“Holy Ignorance” extends Roy’s thesis to all forms of fundamentalism, not just those associated with the Muslim world. Consider the Tea Party movement, whose views on both the Constitution and the Bible insist on the wisdom contained in sacred texts. Tea Partiers, while fearful of liberal and secular elites, prefer to concentrate on President Obama’s alleged socialism. That too amounts to ignorance, but it is no longer very holy.

This article originally appeared in the New York Times.