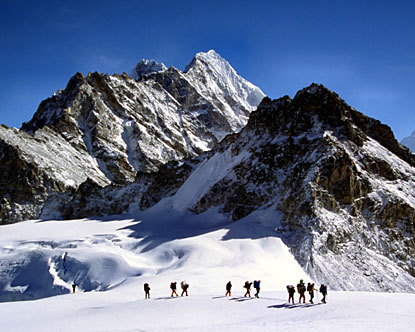 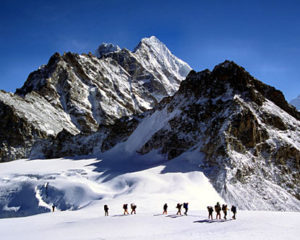 Srimad-Bhagavatam states, “Acaryam mam vijaniyat.” (11.17.27) So, in the beginning stage we are told that the acarya, the guru, is Krishna. Then Raghunatha dasa Goswami, the acarya of prayojana (the ultimate goal), says that the acarya’s position is not that of God himself, but it is that of God’s most favorite—mukunda-presthatve. Ultimately we find that  Krishna’s dearmost are in the department of his potency, and that is guru. We have to harmonize between these two approaches.

In the beginning it is mentioned in the sastra that Brahma means the Absolute as a whole, but by clearer vision we see that there is Narayana, Vasudeva, Ramacandra and so many other forms of the Absolute. And by even clearer estimation we will find Krishna to be within.

One time when Krishna was in a conference with Balarama and Uddhava, they saw a mass of light approaching them. Then after a little time a figure became visible within that mass of light. Then after the light mass approached even closer, they could see the figure of a male person. And when closer still, they could see, “Oh, this is Devarsi Narada who has come.”

In this way from far off you may get a conception of the whole, just as by viewing the Himalayas from a distance you can see many things, but as much as you approach, you will find specific parts, but with more clarity. And when you actually arrive, you will find your Lord and your friends, and you will mix there. At that time you do not find the whole of the Himalayas, but you are located in a particular position. And there, not with the whole, you will find that the desired end of your life has been fulfilled.

Similarly, when you approach Krishna from afar, he is sat, cit, ananda—he is infinite. Then as you approach him, because you are small, you will be located in a particular position. In this way, according to your fitness you will be taken into a particular position of service. There you will engage in whatever service is required of you, and from there you will draw the fullest satisfaction of your nature.

Guru means guide. At first we are guided by attraction to “wholesale” Bhagavan, Krishna, and this helps us to make progress toward him. Then the more we gain, the more the big hazy vision is eliminated and a particular place becomes more clearly revealed. In this way our vision, actions, and everything about us will become located in a particular part of the Infinite. And by carrying out our specific duty there, we will draw our highest benefit.

In the department of rasas—santa, dasya, sakhya, vatsalya, madhura—you shall gain admission in a particular section of service according to your capacity. In each rasa there are also so many subsections and different departments of service, and according to your innermost fitness and capacity you shall be given a place there. Ultimately you will be told, “Do your duty here!” and you will see to that duty. Whatever your immediate guide, your guru, asks you to do, you will do that and thereby receive your best benefit. Religion means proper adjustment.

There are so many acaryas, even in the Gaudiya mission. You have come to your particular guru in the mission and under him there are many different departments of service. Some are selling books, some are delivering lectures, and so forth, and according to your own fitness you are given service in a particular department. But still you are in connection with the whole mission. You joined the Gaudiya lineage but it is a huge thing, with so many departments, so many mathas, and so many duties, but where is that mission?

At first it is a hazy thing, a big thing. Then after you were admitted you were taken in and placed in a particular direction. Your attention was directed towards some post, you went there and gradually you were given some duty to discharge. The whole of the mission is yours, but still you have a particular department and a particular duty, and that will increase more and more. It is possible that you may become the personal secretary of your Gurudeva, or a preacher, or a cook for your Guru Maharaja. And some may be asked to go to other places to preach. Sometimes those may be dangerous places for the devotees, but someone also has that kind of duty. Religion is proper adjustment according to the fitness of person who is given admission.