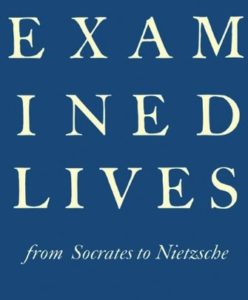 For Friedrich Nietzsche, the answer was obvious: to test a philosophy, find out if you can live by it. This is “the only critique of a philosophy that is possible and that proves something,” he wrote in 1874. It’s also the form of critique that is generally overlooked in the philosophy faculties of universities. Nietzsche therefore dismissed the professional discipline as irrelevant, a “critique of words by means of other words,” and devoted himself to pursuing an idiosyncratic philosophical quest outside the academy. As for texts, he wrote, “I for one prefer reading Diogenes Laertius” — the popular third-century Epicurean author of a biographical compilation called “Lives of the Eminent Philosophers.” If the proof of philosophy lies in life, then what could be more useful than reading about how the great philosophers have lived?

As James Miller shows in his fascinating “Examined Lives,” choosing Diogenes Laertius over more rigorous treatises was provocative because it challenged an idea already predominant in Nie­tzsche’s time: that a philosophy should be objectively valid, without the need to refer to particular quirks or life experiences on the part of its originator. Diogenes Laertius represents an older tradition, which sees philosophy not as a set of precepts but as something one learns by following a wise man — sometimes literally following him wherever he goes, listening, and observing how he handles situations. The “Lives” offers its readers a vicarious opportunity to try this with a number of philosophers, and see whose way works best.

Miller has now had the superb idea of taking Diogenes Laertius as a model, while simultaneously using this model to test whether such an approach can still offer us anything of value. He covers 12 philosophers: Socrates, Plato, Diogenes the Cynic (not to be confused with Laertius), Aristotle, Seneca, Augustine, Montaigne, Descartes, Rousseau, Kant, Emerson and Nietzsche. In each case, he explores the life selectively, looking for “crux” points and investigating how ideas of the philosophical life have changed. Few readers will be astounded to learn that philosophers make as much of a mess of their lives as anyone else. But Miller, a professor of politics at the New School and author of a biography of Michel Foucault, among other books, does not rest with digging out petty failings or moments of hypocrisy. He shows us philosophers becoming ever more inclined to reflect on these failings, and suggests that this makes their lives more rather than less worth studying.

His starting point is Socrates, the most mythologized of all thinkers, the original source of the statement that “the unexamined life is not worth living” and the philosopher whose life became the measure for all others. Early biographers wrote with awe of Socrates’ strange, itinerant approach to wisdom; of his habit of hanging around the marketplace striking up conversations with any passer-by willing to talk or of standing motionless in the street all night while he thought a problem through. But what really set him apart was his death, which redefined his whole life. Condemned by a panel of 501 Athenian citizens to kill himself with hemlock, Socrates carried out the sentence with perfect composure and in full rational awareness — or so the myth has it. No greater confirmation of the value of a philosopher’s existence could be imagined. As Socrates himself said, “Don’t you think that actions are more reliable evidence than words?”

The rest of “Examined Lives”can be read as a history of other philosophers’ failures to measure up to this ideal, either in their deaths or their lives. One of Miller’s great transitional figures is the Roman court-philosopher Seneca. Living half a millennium after Socrates, he too was condemned to death by suicide. He accepted his fate with Socratic courage, but his death itself was difficult. He slit his wrists before begging for a cup of hemlock and retiring to a hot bath to expire. The messiness of his death reflected a morally messy life. For, while his writings promoted wisdom, balance, restraint and detachment, Seneca himself was forced into numerous compromises in the service of his protégé and employer, the murderous emperor Nero. He even helped Nero plot the murder of Agrippina, the emperor’s own mother. The strain was evident. “I am not wise,” Seneca wrote; “nor . . . shall I ever be.” Yet he also advised his favorite correspondent, Lucilius, to “harmonize talk with life.” As Miller remarks, Seneca was “in conflict” with himself.

One Response to Review: Examined Lives