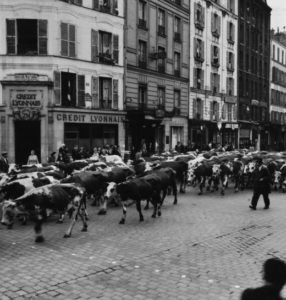 In 1989, Dutch cultural anthropologist and philosopher Barbara Noske in her book Humans and Other Animals coined the phrase the “animal industrial complex.”

This event should have kick started a whole array of social science analyses into the political economy of animal agri-business, yet in the intervening period, I would suggest a paucity of such work and indeed a lack of refinement over just what the concept of the “animal industrial complex” actually means.

I think we can safely assume that Noske took inspiration from the concept of the “military industrial complex” originally named by US President Eisenhower in his farewell address in January 1961 and used to characterize the network of relationships between governments, the various armed forces, and the corporate military/security sector that supplies them. One wonders what he would make of the global scale of such relationships 50 years on.

Inherent to that concept and also applicable to Noske’s is a sense of a powerful network acting via a certain sense of concealment. Yet we should also account for the implicit public support of and complicity with such networks and the work that various ideologies perform in presenting a certain natural inevitability to their existence.

In this vein I would like to offer a definition of the animal industrial complex as a partially opaque network of relations between governments, public and private science, and the corporate agricultural sector. Within the three nodes of the complex are multiple intersecting levels and it is sustained by an ideology that naturalizes the human as a consumer of other animals. It encompasses an extraordinarily wide range of practices, technologies, identities and markets.

A large proportion of global crop cultivation is implicated and we must, following Noske, also include the networks and practices of animal experimentation as a part of the complex – indeed, research links between the agricultural and the medical are one of its features. As Noske herself pointed out, “Disease-prone animals are a source of big profits for the pharmaceutical industries.”

The animal industrial complex achieves the annual slaughter of in excess of 56 billion farmed animals (a Food and Agriculture Organization of the United Nations (FAO) figure), a figure that excludes marine animals, experimented animals, and those farmed animals that don’t make it to the slaughterhouse count.

This figure deserves some pause for thought. It’s an annual figure and it’s on an upward trajectory.

To underline, the animal industrial complex performs the annual repetitious killing of in excess of 56 billion farmed land animals.

A certain degree of opacity and capitalist networking is not the only link between the animal-industrial complex and the military-industrial complex. Both illustrate what French philosopher Michel Foucault referred to as a form of sovereign power understood (like that formerly of a king or queen) as an assumed right to take life or let live as well as a more disciplinary power which is about extracting value from life – the watchful control of populations and an exacting of the optimum degree of productivity and efficiency from the body.

I think we can say the following, even dispassionately (and regardless of how their proponents claim their benefit in terms of trade, employment, security, and sustenance), that both types of complex are mechanisms for the extraction of enormous amounts of capital via the killing of bodies.

Both kill across the human/animal distinction. Both evoke and reiterate a similar symbolism of masculinity and nation. Both exploit by class and ethnicity.  (When one third of global crop cultivation is diverted to feed farmed animals we must know implicitly that the animal industrial complex plays a role in maintaining inequitable relations between North and South).

Both complexes also overlap. For example, we can point to the use of nonhuman animals in warfare, the use of animal experimentation by the military, and we can point to suggested uses of animal biotechnology – especially in the bio-pharmaceutical sphere – in a military context such as the potential production of modified spider silk to create a bulletproof fabric.

An especially notable link between the two is found in the role that scientific knowledge and technological innovation play in both.

Although we might naively only associate science with ideas of progress, this reminds us of the parallel histories attributed to the practice and commercialization of scientific knowledge which point to its alliances with capitalism and ideas of mastery and control.

It is specifically the role of science, and specifically animal genomics (the study of the genomes of organisms), within the always-changing animal industrial complex that I wish to focus upon in the remainder of this article.

Noske embeds her concept of the animal industrial complex within the 20th century emergence of factory farming.

It is useful to go over some of the terrain of how crucial scientific knowledge has been to that process and how, in light of the 21st century turn to molecular science, we are currently, it appears, about to embark upon a further industrialisation of animal agriculture.

Here by ‘industrialisation’ I mean several things. On one level it means the globalization of economic relations and the importance to that process of a whole array of technological innovation including, for example, the ability to freeze sperm and the subsequent development of techniques such as artificial insemination and embryo transfer.

Certainly a significant degree of the capital accumulated from global animal agriculture now stems from the trade in farmed animal sperm. Moreover, the ability to transport live and dead animals long distances and at greater speeds like “any other commodity” has been an essential part of the story of the animal industrial complex.