What Happens When You (Almost) Die? 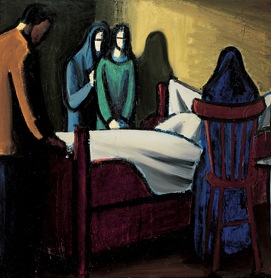 Wanda Colie vividly remembers what she saw in 1984 when, at age 28, a condition that produced blood in her lungs nearly killed her. The pain vanished and a crowd of familiar faces came to welcome her in a light-drenched valley.

For more than two decades, Colie kept her experience secret. But she’s recently joined hundreds of others who’ve started going public with their near-death experiences, or NDEs.

“For a long time, I couldn’t talk about this stuff because it was just stuff you didn’t talk about,” said Colie, a housecleaner who lives in Rougemont, N.C. “I had to deal with it myself, (and now) I can’t explain the relief to know that I’m OK. I’m not going crazy or anything.”

Once dismissed as mere hallucinations, NDEs are being taken more seriously than in the past. Studies published in The Lancet, a respected British medical journal, and the Journal of the American Medical Association have reframed NDEs as phenomena worthy of scientific research.

Last year, three medical doctors published books on new NDE research, including what it suggests about consciousness beyond the brain and even the possibility of afterlife.

Several mainstream films, including Clint Eastwood’s recent “Hereafter,” toyed with the possibility of an afterlife, and as NDEs garner increased attention, more people with NDEs are opening up and shedding light what happens as earthly life slips away.

The Louisiana-based Near Death Experience Research Foundation, whose database of more than 1,600 NDEs is the world’s largest, added a record 280 new accounts last year — up 35 percent from 2009. The North Carolina-based International Association of Near Death Studies (IANDS) has amassed more than 900 accounts at its website and now tracks 46 support groups for people who’ve had NDEs.

More NDE accounts means more data to examine and more reliable inferences, according to researchers such as Dr. Jeffrey Long, a Louisiana oncologist whose study of 613 NDEs forms the basis of his 2010 book, “Evidence of the Afterlife: The Science of Near-Death
Experiences.”

“That large number (of survey participants) helps us to be more confident in the findings than we ever could be previously when we studied much smaller numbers of near-death experiences,” Long said.

As more accounts come to light, researchers are identifying patterns that transcend differences based on age, culture and religious (or nonreligious) backgrounds.

Frequently noted experiences include moving through a tunnel, looking down at one’s own body, reuniting with predeceased loved ones, and being overwhelmed with a sense of love and beauty.

Some doctors who study NDEs say these perceptions and others can be traced to a brain in a distressed condition. Dr. Kevin Nelson, a University of Kentucky neurologist, argues that the brain can remain alive for several minutes after a disturbance in heart rhythm. The brain is not conscious after a cardiac arrest, he said, but an “in between” state of partial consciousness can ensue with the ebb and flow of blood in the brain for a few minutes.

If a patient remembers anything from the experience, Nelson says, it’s a function of blood flow, oxygen levels and other activity inside a living brain.

“People have been led astray in the general literature, and I was concerned about that,” said Nelson, who explains his theory in his new book, “The Spiritual Doorway in the Brain: A Neurologist’s Search for the God Experience.”

Other medical researchers, however, say NDEs happen when the brain is neither conscious nor alive. Dr. Pim van Lommel, a Dutch cardiologist who interviewed 344 cardiac arrest patients for the Lancet study, said patients repeatedly report keen awareness from moments in time when their brains were clinically dead.

The explanation, van Lommel said, is that consciousness exists apart from the body, and humans encounter this greater consciousness more fully when earthly life ends.

“People who have had near-death experiences say death is just the end of our physical aspects, but it’s not the end of who we are,” said van Lommel, author of “Consciousness Beyond Life: The Science of Near-Death Experience.” “That is what has been told … in religious traditions. They all have the same message: the essence of who we are is
immortal.”

Long’s research echoes van Lommel’s. He notes how patients, some of whom were clinically dead for a time, later recall things that were said around the operating table or at a bedside during these moments. Their observations are corroborated by witnesses, which makes him “absolutely convinced there is a life after death — a wonderful life after death.”

While some on both sides of the debate accuse their critics of practicing flawed science, the prospect of empirical support for an afterlife is nonetheless shaping how people approach death and dying.

For patients with terminal illnesses, fear of death is often an obstacle to overcome. A 2009 study at Dana Farber Cancer Institute found that patients with a religious faith were more likely than nonbelievers to ask for aggressive life-saving techniques in their final days. But those who trust in the reality of an afterlife need not be afraid of what comes next, according to Diane Corcoran, a nurse and president of IANDS.

“I treat people who are dying very differently than I did 20 years ago,” said Corcoran, who says she believes in afterlife because she’s heard hundreds of similar accounts of what happens there.

“I try to teach people that (death) doesn’t have to be an awful thing; it could be a loving thing. You could certainly treat it differently and not hold on to people that are struggling or suffering. Maybe there’s a better place for them to be.”

18 Responses to What Happens When You (Almost) Die?