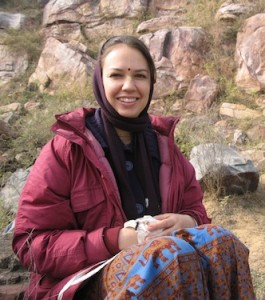 Part two of Gaurangi-priya’s reflections on her recent pilgrimage to Vrindavan. Read part one.

The past two days have been a real treat in my retreat here in India. I have been staying with my dear friend Campaka at the foot of Govardhana, one of the most sacred of all holy places for us, and it has been so rejuvenating.

After shopping in helly-smelly-Delhi yesterday, I had a long and restful sleep here in Govardhana and awoke the next day, ready to start another adventure. Govardhana is still more rural than Vrindavana, and I get more glimpses of the villages of years gone by: the brick side roads going to little temples that are painted bright pink or blue; the beautiful fields of bright yellow mustard; the great Giriraja with his purplish stones and endearing presence, a woman with a pile of firewood balanced on her head while she pulls her cow along the road. And then the children, the little ones with sweaters and hats on but bare bottoms, running along with their siblings with smiles or tears begging for money from me. These are a few images of my two days here. But let me start at the beginning of my stay.

After breakfast, Campaka and I began our parikrama to Govardhana. Technically it wasn’t considered pure parikrama because we wore shoes, and yes we had babas along the path chiding us. “Chapal nehi,” they said. But the spirit of pilgrimage is within the heart, and for me I went with a desire to get to know Govardhana and this town better and offer my homage to this place where Radha and Krishna enjoyed so many pastimes. So we set off on our journey.

Campaka has lived here at Govardhana on and off for five years now, and it is a real treat to go around with someone who knows the area. We first walked on the main road, but then cut through a gate and entered the inner path around Govardhana. This path is not paved, but simply soft sand, and is right at the base of Govardhana. I watched women making cow dung patties, arranging them on the grass in formations to allow the best drying in the sun. Their children ran around, playing together. There were dogs, big pigs with lots and lots of little pink piglets clustered together, and the occasional cow that crossed our path.

We stopped by a small, old structure right near the hill in the Aniyor area where Krishna manifested his form as Giriraj and requested more and more offerings. Sitting there, we took a break for chanting. I looked out at the serene countryside, sitting literally at Govardhana, while I fingered my japa mala. These calm moments, which are much more difficult to vividly describe in writing, are the real reasons for my trek around the globe. To be able to connect internally with my spiritual practice, and have moments of absorbing the culture here, is very special to me. 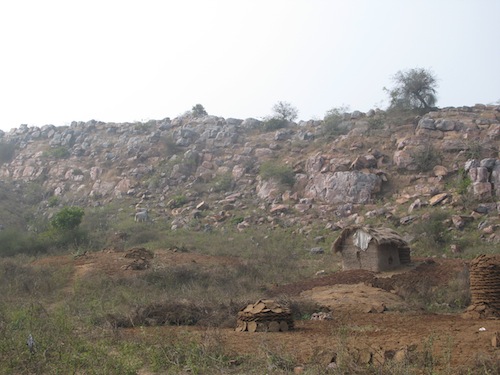 Continuing down the path, five boys aged five to seven came running up to us, grabbing my arm begging for money. We stopped and gave them each a coin, thinking that if we gave them something they would be content and not follow us. But because there were two of us white women, they expected to get a coin from each of us, which was not our intention. We continued on our way, but one boy pulling on my arm with the most pitiful face persistently followed us. It was very difficult for me, and I was torn as to whether to give him more. It is nothing for me to give him a little money, but it is a sticky business here. Campaka explained that if you give them too much money they would call it out to the neighborhood until you are swarmed with little children needing money, and the purpose of a peaceful pilgrimage is compromised. The best place to give money is to organizations like the Sandipani Muni Schools in this area, who provide meals and an education to the children of the poorest of the poor.

After being repeatedly told in Hindi by Campaka and a fellow pilgrim man to leave me alone, the boy finally relented. Children have a sixth sense, and I’m sure he sensed my distress and the battle in my mind whether to give him more, and that is why he was so persistent.

We walked along the path and then cut through to the main road again. From here we went down a brick road to visit the Balarama Dauji Mandir, where there is a five foot deity of Dauji and a much smaller two foot deity of his little brother, Krishna. These deities were installed by Badranabha, Krishna’s great-grandson, and they are one of the few original murtis still remaining in Vraja. In the 1500s there was a large scale attack on Vrindavana area by Muslims, and most of the deities were hidden and moved to prevent desecration. The Dauji deities were hidden in the nearby Sankarsana kunda during that invasion, and so are now being worshipped in their original spot. The Deities are made of a dark stone, with both Krishna and Balarama having Ananta-sesa over their heads. Dauji has his right hand raised in benediction. Balarama represents sri guru in our life, and is the original guru. There are families who run these temples, so while we were there the two daughters of the present priest visited us. One of them was very talkative and struck up a conversation in Hindi with Campaka, whom she remembered from a previous visit. After giving a little donation and receiving some rock candy prasadam we moved on.

Our original plan was to walk around half of Govardhana, but after my trip to Delhi the day before, and being new to this area, I decided that I preferred the more leisure route of just walking and stopping at locations that seemed meaningful to me.

Next we went to Govinda Kunda, where Krishna was bathed by Indra, Surabhi, and the other devas after the Govardhana lila. This is also where Krishna was given the name Govinda, he who gives pleasure to the cows and people, hence the name Govinda kunda. In more recent times, it was near this kunda that Madhavendra Puri chanted and had the dream that led him to find the Nathji deity. The same tree that he sat under is still present, right on the edge of Govinda kunda. As is customary we descended the stairs to the lake, offered our respects, and put some water on our heads. We then offered prayers to the sacred old tree, witness to hundreds and hundreds of years of devotees in this special place.

Our next stop was the Dhoka-Dauji temple, which is where Balarama peeked at Krishna enjoying the rasa dance and in his astonishment his crown fell off and made an impression in a stone where there is now a mukuta sila (crown stone) worshipped. In quick succession we then saw the Nava and Apsara kundas, which represent Radha and Syama kundas on this opposite end of Govardhana.

The last stop, after seeing the tail of Govardhana (Govardhana is said to be in the shape of a peacock), was the Punchari Lautha Baba deity, the cowherd boy who is still waiting with a meal for Krishna to return to Govardhana. The story goes that he had cooked for Krishna, but that day Krishna came by on his way to Mathura with Akrura who had come to take Krishna away from Vrindavana. Krishna promised to return for the meal, and the Lautha Baba is still waiting today. Seeing him tugged at my heart, as the love of these people of Vraja for Krishna is revealed a little bit to me.

We found a tanga, horse driven cart, for our ride home. I was grateful for the day out with these people who grow up with a profound respect and love for Sri Giriraja. 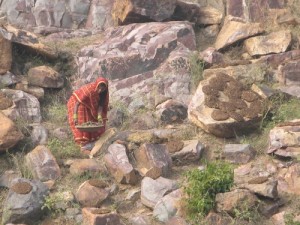 Staying at Campaka’s, besides being like staying with family, is like staying at a five star restaurant. Especially for here in India, Campaka cooks incredible home-style meals. Her hospitality has been comforting.

The next day, due to the extreme cold, we stayed inside most of the day. But at 3pm when the sun began peeking through the cold fog, Campaka and I decided to take a bicycle adventure around the lower half of Govardhana. We got on their two bikes and off we went. It was awesome. I have always had a fantasy of biking in a foreign country, and I was so happy to finally do it. We were quite the sight, I guess, as children pointed and laughed, and I heard over and over the word “cycle” in a Hindi sentence. I think women, especially white women, don’t often ride bikes.

The trip took us about one and a half hours, with only a short portion being in the busy congested Govardhana town. Otherwise the road was flat, and the buffalos, cows, children running back and forth, pilgrims doing parikrama, pilgrims doing dandavat parikrama, motorcyclists, and other bicyclists were relatively easy to get around. The exercise was warming and invigorating, and when we returned I felt refreshed. I imagined going on biking adventures with my whole family, seeing my son Venu using his bike bell frequently, my husband Madan in front of us leading the way, and our cautious daughter Dharvi laughing at the scenes. It would be nice, someday!

I write this a few minutes before leaving to visit Radha kunda, the most sacred of all places, and then tonight I return to Vrindavana where I will stay for the duration of my visit. I leave this area of Govardhana thankful for the relaxing visit and company and for the chance to see this sacred location. The stories and these sacred places are only meaningful in so much that they move the heart towards thinking about that bluish cowherd boy, Krishna. And I only know that these places are sacred, because of the previous teachers in our line, and because Srila Prabhupada told us. The importance of guru-parampara is thus all the more present to me, as only through service to my Gurudeva and the line of previous teachers may I someday enter the real dhama. I pray that these stories and places of pilgrimage may become permanent fixtures in my consciousness where that bluish cowherd in the form of his holy name will dance in the courtyard of my heart.