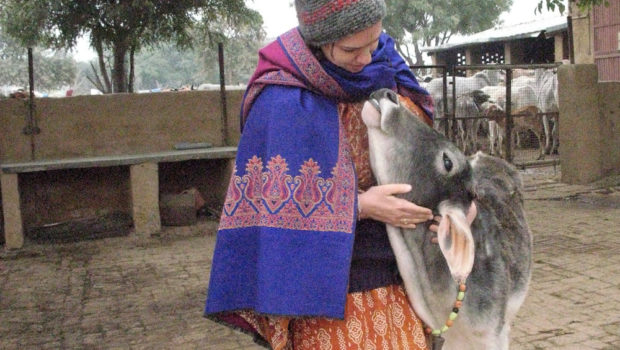 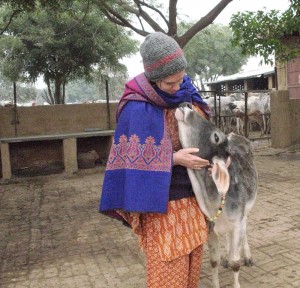 Part three of Gaurangi-priya’s reflections on her recent pilgrimage to Vrindavan. Read part one and part two.

Vrindavana means harmonious living, and a daily reminder of that lifestyle here is the presence of all kinds of animals. I have seen cows, bulls, horses, camels, donkeys, goats, sheep, buffalos, pigs, dogs, chickens, beautiful bright green parrots, and of course, lots and lots of monkeys! I have seen all of these animals just on the road with me and everyone else. They become part of the landscape, part of the daily life. The sweet part about having these animals here in Vraja, is that many of them remind me of Krishna and his pastoral pastimes here.

The cows were the very life of the inhabitants of Vraja, and I find them everywhere here in present day Vrindavan. It is mentioned in Bhaktirasamrita-sindhu that such activities as brushing and feeding a cow increase bhakti within our heart. Cows are very affectionate animals, and while passing them in the street I always try to give them a little pat and rub under their chin. Just yesterday I stopped to pet a rather impressive looking large bull, and he was so smitten with the bit of affection, that he began licking my arm with his huge rough tongue!

When I see the cows everywhere, it is easy to have them disappear into the background and become a nuisance on the already congested roads. But I try to remember their place in Krishna’s heart, and the importance of them being here in their home. One devotee who has truly seen the cows of Vraja is Kurma-rupa prabhu, one of my personal heroes. Ten years ago, upon seeing the plight of the abandoned cows here, he began feeding and taking care of 10 of them. From that beginning he formed Care for Cows, which now feeds and houses over 400 cows, all of whom were brought to his safe haven from dejected, often severely injured, starved, and abandoned situations. Devotees from around the world, who understand the deep theological importance of taking care of cows in Vraja, can sponsor the maintenance of a cow. The first day I visited Care for Cows, I was lucky to find Kurma-rupa prabhu there.

“When you take care of cows,” he shared with me, “you don’t need anybody to tell you that you are doing the right thing. You just know it in your heart, because it pleases Krishna so much.”

The cows and bulls at Care for Cows are all fed and maintained nicely, but thrive most of all on the love and affection they receive there. 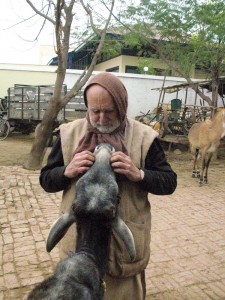 While I was there the cows were let out of their pen for the morning feeding. One cow, instead of running to the feed lot, came over to our little group. Kurma-rupa began petting her and speaking to her lovingly. “Jhanava here is one of our best preachers,” he said, “because she is good at melting peoples’ hearts and convincing them to take care of cows. You see how affectionate cows are, that she would rather come here and get some love than go to eat.”

Unfortunately as Vraja becomes more and more covered over, the residents don’t see the cows and so hundreds and hundreds of them roam the street, hungry, neglected, affection-starved, and many times injured. Care for Cows is a shining example of cow seva and in educating visitors and locals alike in the importance of taking care of these animals. As I was leaving, Kurma-rupa told me with a broad smile on his face, “I am so happy doing this cow seva. I figure if I can serve cows in Raman Reti for the rest of my life, when I die I will most probably think of the cows in Raman Reti.”

I have no doubt that that will be the case, and his place in Krishna’s land of cows will be most assured.

The other prominent animal here is the monkey, and they remind me of Krishna’s mischievous nature. They have been here since Krishna’s time on the earth, and like him, they enjoy stealing food from people. They can be a nuisance for visitors as they can be aggressive and grab food and other personal items right from your hand, though I have had no problems personally with them…yet. When I see them I think of Krishna sharing his stolen butter with them in the Damodara lila and how because of their generations of service to the Lord in his form as Ramacandra, they have been given permanent residence here.

The green parrots are a delight to see, and remind me of the pastimes of the Radha-Govinda. They are Srimati Radharani’s personal messengers, bringing love notes back and forth between Radha and Krishna. They have bright green feathers and red-beaked faces and fly all over Vraja. One temple just a block from where I was staying feeds the parrots every day at 3:45pm. The devotee who runs this temple spreads about six hundred pounds of bird seed all over the courtyard. At 3:45 he makes a loud bird sounding call, and all the parrots and pigeons in the area come flying to this temple. It was an amazing sight, seeing literally over a thousand green parrots and pigeons flying down for their meal. As the saying goes, birds of a feather flock together, and so they made a beautiful formation with the bluish pigeons in the middle and the green parrots forming a large circle around them. When they flew away the wind made from so many of them flapping their wings was strong enough to create a dust storm and a strong blast in my face.

The horses, camels, buffalos and donkeys I see are used to pull carts and loads, and are usually taken care of due their service to their masters. It is nice to see that there are still animal pulled carts here, and I hope that the locals can see the benefit of that over the numerous problems of fuel-fed transportation.

The pigs are enourmous, ugly, and produce copious amounts of little piglets that are cute and pink for but a short amount of time. They are part of the natural garbage system here, though with the introduction of plastic bags and styrofoam, the amount of trash the pigs cannot consume is enormous and everywhere.

A friend of mind who lives here in Vraja said to me the other day, “No matter what people try to do to make Vrindavana more technologically advanced, it will always be a village.”

And that is a fact. It is Krishna’s rural village, and so the animals stay a part of it.

But due to Vrindavan becoming industrialized, with the dusty roads and thick forests giving way to cement streets and high-rise apartments, the situation of the animals is a precarious one. With their natural habitat and food system being destroyed, many of the animals are in a sad state. Some are being pushed out as well. Peacocks, which once flourished in Vraja and whose singing delighted the hearts of the Vraja bhaktas, are now no where to be seen. With trees being cut down and the air polluted, they have retreated to the outskirts of Vrindavan where one can still find fields of green with tall trees and quiet air.

I want my children and future generations to be able to visit here and see the animals from Krishna’s pastimes and the village beauty of Vraja. I want the stories from the Krishna Book to be able to come alive to them in the locations where those very stories took place. In the twelve years since my last visit here, so much of that rural beauty has been replaced with construction. Imagining Krishna going down the soft sandy pathway here in Raman Reti with his hundreds of cowherd boyfriends and their thousands of cows and calves, is becoming more and more difficult. When I came here 20 years ago with my then 3-year old brother, we walked to the Yamuna and when we turned a bend he expected to see Krishna sitting their with his friends eating lunch. “Where are they, Mata, he asked?” Such was the strength of the dhama.

Will we be able to protect this dhama, caring for her animals and forests and rivers, so that we will get glimpses of the place Krishna roamed in ages past? 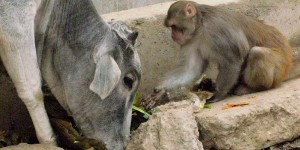