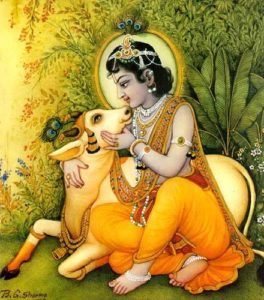 He who from the very beginning of creation takes the living entities, known as the gopas, as his very self is verily Gopala. One should think: The truth is identical with the sacred syllable Om, and I am he. I am he who is the Supreme Brahman, the essence of whom is Krishna, whose only form is one of eternal bliss. That Gopala is the unobstructed Supreme Truth. Thinking, “I am he,” one should take control of the self and concentrate the mind. One should then meditate on the self, thinking, “I am Gopala.” Verily Gopala is unmanifest, infinite, and eternal.

The cowherd people of Krishna lila are all examples of perfected spiritual forms of pure consciousness engaged in divine sport with Gopala Krishna. Among them, Krishna’s cowherd friends in particular serve him in the spirit of equality. Sri Krsnadasa Kaviraja Goswami describes the principal ingredient of their sentiment with the word visrambha: visrambha-pradhana sakhya (Cc. 2.19.224). Visrambha means familiarity, intimacy, and absence of restraint, and it implies a strong sense of equality. Thus the cowherd friends of Krishna think of themselves as his equals. Their love for him is an example of pranaya, the sense that there is no difference between Gopala Krishna’s body and their own. Thus they never hesitate to touch him, the Parabrahman, even with their feet. Indeed, within the lila they often defeat him in play fighting, the consequence of which is that Krishna must carry them on his shoulders. Sometimes they serve him and sometimes they accept service from him, krsne seve, krsne karaya apana-sevana (Cc. 2.19.223).

Sri Prabodhananda says that in this verse Narayana tells Brahma that the name Gopala means “he who accepts the gopas, or those who are entirely dependent on him for their existence, as his very self, with unequalled affection as though nondifferent from him throughout all time.”1  He comments further on the spirit of Narayana’s statement: “Just as the cowherds are always by Gopala Krishna’s side in the spirit of oneness with him, so too do all living beings remain with him.” All living beings remain with him as his loving devotees in potential, and the principal path for them chalked out here in Gopala-tapani is one that culminates in loving him in the oneness characterized by the cowherds of Vraja. On this path devotees progress from worshiping to actually being worship itself in the form of becoming the bhava, or spiritual emotion, they cultivate. This spiritual emotion for Krishna is nondifferent from him, inasmuch as Gopala Krishna is that face of Brahman that corresponds with the bhava of Vraja bhakti that this spiritual plane’s inhabitants are constituted of. The dynamic nature of advaya-jnana-tattva (nondual consciousness) that is experienced by the enlightened is fully expressed as Goloka—the dynamic union of love between Gopala Krishna and his cowherds, who know svayam bhagavan Sri Krishna as their very own in a compact of love.

In this verse Narayana further describes Gopala Krishna as the “unobstructed Supreme Truth.” By this he implies that his own position is subordinate to that of Gopala Krishna when considered in terms of potential for experiencing and being experienced in aesthetic rapture. Therefore, Krishna’s being the unobstructed Supreme Truth implies that he is akhila rasamrta murti, the reservoir of sacred aesthetic rapture (Brs. 1.1.1). He is the Deity of ahaituki (causeless), apratihata (unobstructed) love. It is this love alone that fully satisfies him (yayatma samprasidati).2

Devotees should worship Gopala Krishna thinking themselves to be spiritual in nature and thus qualitatively one with him, and moreover, they should feel that he is their very life. Narayana advises that this is the way to attain mastery over the lower self and be delivered from the oppression of the mind and senses. When Narayana says, “Verily he is unmanifest, infinite, and eternal,” Sri Prabodhananda concludes that Narayana means Gopala is whole in himself (svayam-siddha), not revealed by anyone other than himself, and thus self-manifesting.

O Brahma, I will remain forever in Mathura, surrounded by my symbols—the conch, discus, club, lotus, and flower garland.

O Brahma, by remembering me with a devoted heart as the universal form, the supreme form of effulgence, who is yet devoid of form, you will certainly attain that supreme abode.

In this verse Narayana speaks about how one can attain eternal residence in Mathura. Sri Prabodhananda comments that some readings have cit-svarupam in place of visva-rupam, in which case the text changes from “the universal form” to “who possesses a spiritual form as his identity.” Otherwise, visva-rupam means “he in whom the universe is contained” or “he in whom all forms are contained,” in which case it is a reference to Krishna within whom his form as Narayana resides. In either case, his form is extraordinary and effulgent, unlike material forms. So much is this the case that Narayana describes himself as formless here only to emphasize that his spiritual form has no material qualities. Descriptions of God as formless are found throughout the Upanisads, as are descriptions of his spiritual form. Thus it should be clear that when the sruti describes God as formless, it speaks of his being without material form.

In the Svetasvatara Upanisad (6.8) it is said:

He does not possess bodily form like that of an ordinary living entity. There is no difference between his body and his soul. He is absolute. All his senses are transcendental. Any one of his senses can perform the action of any other sense. Therefore, no one is greater than him or equal to him. His potencies are multifarious, and thus his deeds are automatically performed as a natural sequence.3

Or simply by residing in the region of Mathura in Jambudvipa and worshiping my Deity form, one becomes most dear to me.

Whereas in the previous verse Narayana speaks of meditation (smaranam), in this verse he speaks of ritualistic worship (arcanam), which is generally recommended for those who are not yet qualified to sit in meditation. Ritualistic worship of Krishna is very common in Mathura and has been for centuries. The most important deities of Krishna, dating back to the time of his grandson Vajra, were worshiped by the principal followers of Sri Caitanya, who through their devotional zeal were able to secure the patronage of Hindu monarchs and thus establish large temples for these deities. In this way, they attracted many pilgrims to Mathura, making it one of the most important places of pilgrimage on earth (referred to here by its ancient scriptural name, Jambudvipa).

The Deity form of Krishna situated in Mathura is to be always worshiped by you. People worship me in four ways according to their qualifications.

Prabodhananda Saraswati comments that through the words of Narayana, “Durvasa stresses Krishna’s puja as being above all others. He is saying to the gopis: ‘For those like you who are the most qualified (paramadhikari), Krishna’s form in Mathura is the most worshipable, not the other Visnu forms present there, such as Padmanabha.’ Some people also worship Krishna as one of the members of the catur-vyuha. For them, it is said here that there are different levels of qualification that correspond with the particular object of their worship.” He also emphasizes that when Narayana says mam in this verse, he means himself in the form of Krishna.

In this world, the most intelligent people following the principles of religion for the age will worship Gopala and those born after him, such as his brother Rama and Rukmini for whom he has great affection.

The word anuja in this verse should not be understood to indicate that Rama was born after Krishna, for within the lila he is his elder brother. It should be understood in terms of Balarama being an expansion of Krishna and in this sense appearing after him.

The worship of Gopala Krishna in the current age of quarrel (Kali-yuga) is best performed through congregational chanting of his name (sankirtanam), as demonstrated by him in his appearance as Sri Krishna Caitanya (Gaura) some five hundred years ago. The word sumedhasah this verse also appears in Srimad-Bhagavatam 11.5.32, where the avatara for the Kali-yuga is described along with the method of his worship. While sumedhasah literally refers to those endowed with very good intelligence, it refers more to those who have acquired spiritual merit in relation to bhakti (bhakty-unmukhi-sukrti) in this and previous lives. They thus have subtle theistic intellect and a psychological makeup that enables them to embrace the worship of Gaura and Gopala.

I am Gopala, unborn and eternal. I am the everlasting Pradyumna. I am Rama and I am Aniruddha. The wise man thus worships the atma.

Sri Prabodhananda understands atma in this verse to refer to the paramatma, as it often does throughout the Upanisads. Thus as discussed earlier, one should worship God thinking I am Gopala in the sense that the individual soul is ultimately of the same spiritual nature as God (abhedopasanam). Sri Prabodhananda comments further that the wise person referred to here “is one who is fixed in the mood he personally prefers” (svasyesta-bhavana-sudrdhah).