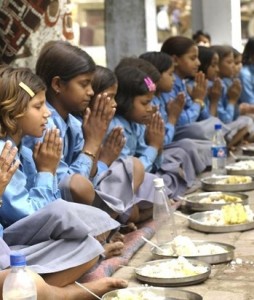 The hot meals are served by the Akshaya Patra Foundation, the largest non- profit in India, in partnership with the government’s school meal program that covers 120 million children in 1.26 million schools across the country.

A show of hands in Ekdanta indicates that one quarter of students has not had breakfast before school.

Eight-year-old Nagina Singh has not had even the glass of buffalo milk that other children have had before school. “Both my parents left for daily wage labour early morning and there was nothing at home to eat,” she told IPS.

“This is not uncommon among the eighty-five marginal and share-farmer families populating Ekdanta,” says head-teacher Chandrasen Singh.

The small dusty village is 170 kilometers from Delhi in the northern Indian Mathura district of Uttar Pradesh State.

Nagina is one among the 169,000 children across 1,516 schools that are fed by Akshaya Patra’s Vrindavana unit—ten kilometers from the Hindu pilgrimage town of Mathura. Karnataka’s Hubli kitchen—420 kilometres from Akshaya Patra’s Bangalore headquarters—is their largest, feeding 176,000 children in 779 schools.

Intelligently engineered automated kitchens have been Akshaya Patra’s cornerstones for achieving remarkable scale and efficiency in delivering school meals. Using a hub-and-spoke model, mass quantities of food cooked in these automated kitchens are distributed in smaller amounts to individual schools in the surrounding areas.

Malnutrition, classroom hunger and school dropouts continue to be grave concerns in India, making Millennium Development Goals (MDGs) one and two—to eradicate extreme poverty and hunger, and to achieve universal primary education—difficult to achieve by the 2015 deadline.

The global hunger index published by the International Food Policy Research Institute ranks India – with 42 percent of the world’s underweight children aged under five—sixty-seven among eighty-four countries in 2010.

In 2001 the Supreme Court of India directed governments to provide cooked meals in all state-run primary schools to address these concerns.

In 2000, Akshaya Patra was already feeding 1,500 school children in Bangalore. “Within a month of starting we received requests to feed 100,000 children,” 37-year-old Narasimha Dasa, a mechanical engineer by training, told IPS.

This article was also cross-posted on Vrindavan Today.