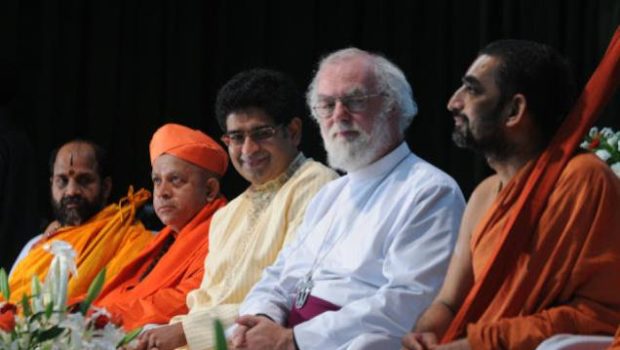 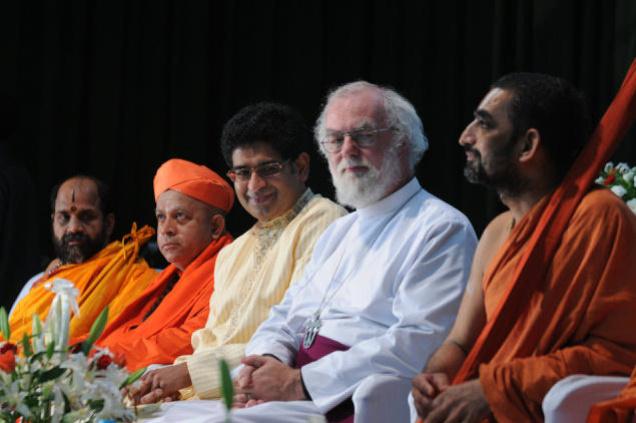 Archbishop of Canterbury Dr. Rowan Williams meets with Sri Sugunendra Teertha Swami of the Madhva sampradaya (left) and Sri Chinna Jeer Swami of the Sri sampradaya (right) in Bangalore last October. Home in London , he gave his reflections in February.

Last month, the Archbishop of Canterbury reflected on his recent dialogue with Hindu swamis in Bangalore, India. The event was held at Lambeth Palace on the south bank of the Thames, and was hosted by the Hindu-Christian Forum. I was particularly interested to hear that the head of the Anglican Communion‘s 80 million Christians had been in discussions with Vaishnava acaryas, and I was pleased to accept an invitation to the event.

As far as I know, the Archbishop’s dialogue was an historic occasion—the very first such meeting between the head of the established church of England and Indian sannyasis of ancient lineages. Indeed, although other meetings may have previously taken place with swamis of the Advaita school, his meeting with two Vaishnava acaryas at the same time must have been unique.

Last October, the Archbishop Dr. Rowan Williams met with Sripad Sugunendra Theertha Swami of the Puthige Matha, Udupi, an acarya of the lineage of Madhvacarya; Sri Chinna Jeer Swami of the Sri Vaishnava lineage; Sri Harshananda Swami of the Ramakrishna Mission; Dr. Shivamurthy Shivacarya of the Lingayats; and Sri Swami Paramananda Bharati of the Sringeri Math, a sannyasi in the line of Sankaracarya.

His first comment on Wednesday morning at Lambeth Palace to the fifty or so Hindus and Christians gathered there was that in India he witnessed reflections and echoes of the theological discussions within his own tradition. Some of the theological issues found in Hinduism concerning grace and free will, and God’s immanence and transcendence have their parallels in medieval European discussions.

Yet despite the depth of our mutual religious paths, the world seems to “systematically trivialize what human beings are capable of,”  he said, as he reflected on how much both Hindus and Christians are consequently “hemmed in” by “easy and crude versions” of their deep philosophical issues and religious practices. Indeed, this seemed to be a recurring theme: the extent to which the highest spiritual aspirations of human beings are discounted because of the observer’s unfamiliarity with the appearance or ritual behavior of “the other.”

“The other believer’s ritual, practice, tradition, and language challenge what you know about yourself.”

On identity he commented: “We must establish what notion of human dignity we are working with; it is based on something inexhaustible.”

Yet in the world today we must be aware of “the risks of allying religious language with political power, thereby imposing a certain kind of secularity.”

“When a religious person wants to declare that “we are under God” it shapes the goals of the society in which the person lives. There should be religion in society and as a principle that is robust and defensible, but if there is dominance of religion in politics and freedom of conscience is not tolerated, and certain voices are made inaudible, certain minorities repressed, then that is wrong.” The Archbishop declared that India’s lasting legacy as a politically secular nation—a choice made at the time of independence—is that ‘the state creates a space where religions can believe, but not dominate.’

Returning to an initial theme of how religions other than one’s own are explored, taught in schools, and discussed, the Archbishop explained his views: “There is comparative religion and then there is comparative theology, an attempt to go beyond mere ‘comparative-ism’ and to see what questions need to be answered, and can we do it together? This is ‘interactive pluralism,’ a respectful, lively engagement.” He added that such discussion needed to be based on philosophical ideas and ethical values rather than a discussion of externals such as clothing and so on. One issue for him was the status of women and their dress. Theology, he said, needs to be disentangled from culture to establish what practices are culturally based (or factually based on a repression of women) and which come from a perspective grounded in spiritual considerations.

“We need a greater level of religious literacy. There is ignorance in administrative circles. Religion in schools is sometimes the study of the eccentricities of foreigners, which I think is an outdated British approach. The ethical approach is deeper. We can study the devotion, not simply the festivals, but the feelings supporting them.”

“When we speak of faith we should speak of not only one tribal entity but of faith in general, and we should bring that into the public arena. We have to be truthful about the other, and give an account of their faith and practice that they would recognize, even if we don’t agree.”

“Hindu dialogue has often been conducted by the under-educated. Hindus have been spoken for by academics (instead of educated Hindus explaining it themselves). There is a tendency to project a homogenized version of Hinduism in an attempt to understand it.”

Here Dr. Rowan Williams was hinting at the problem of trying to explain Hinduism as a singular entity rather than what it actually is: a family of sampradayas or ‘schools of faith.’ Understanding this problem, a problem that has dogged Hinduism in the diaspora for decades, is the key to beginning a fresh level of understanding. So it is extremely significant that the Archbishop’s visit to India embodied the Church’s desire to dialogue with the variety of sampradayas. Indeed, only by meeting representatives from the different sampradayas can the Church begin to understand that the word ‘Hinduism’ is a convenient but highly misleading term.

Commenting on the phenomenon of interfaith dialogue, the Archbishop said that: “Because Hindu-Christian dialogue comes from colonial times, we have to go beyond a polite mutual ignorance. There are social, spiritual, and educational frameworks for interfaith.”

On the thorny question of religious conversion to Christianity in India he said: “I believe that freedom of religion means the freedom to change. Conversion is a movement of the heart, and people do change. But religious conversion should never be the result of manipulation, pressure, bullying or bribery. Where that is the case it is wrong.”

28 Responses to Archbishop of Canterbury Meets with Hindu Acaryas