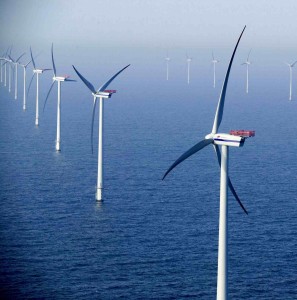 Some would have us believe that new-fangled, clean, renewable sources of electricity aren’t ready for prime-time and the only way we’ll replace greenhouse-gas-generating fossil fuels is with an aggressive research effort to turn prototypical schemes into commercial reality. Nobel laureate Burton Richter, author of Beyond Smoke and Mirrors, is one such scientist. He derides hydrogen fuel cells as lunacy, loves nuclear reactors, and generally insists that everything else already on the shelf is insufficient to make a serious dent in our power mix. Here he is at a 2010 conference organized by the like-minded Breakthrough Institute and the AGW-denying American Enterprise Institute, both of which don’t care much for the idea that we already have the tools we need to forestall catastrophic climate change.

But Richter, TBI and their ilk never seem to offer more than broad generalizations of existing technologies. Always missing is a detailed critique. Sure wind power contributes only fraction of what coal does to the U.S. electrical grid, but it turns out it’s already competitive with natural gas in some markets. Yes solar photovoltaics are expensive, but costs are falling fast (as opposed to nuclear power) and it’s only a matter of five or 10 years at current rates before even PV arrays make economic sense for select consumers.

Finally, we’re getting some honest assessments. First up is a pair of papers in the journal Energy Policy by Stanford’s Mark Z. Jacobson and UC Davis’ Mark A. Delucchi collected under the common title of “Providing all global energy with wind, water, and solar power.” Part 1 deals with the physical issues and Part 2 the economics. The conclusion of their exhaustive research is that is it entirely possible to run the entire world on wind, water (hydro-electricity) and solar power (both PV and concentrated thermal) by 2050. And they aren’t restricting themselves to the electrical grid. This includes replacing all fossil fuels with batteries and fuel cells:

Such a WWS infrastructure reduces world power demand by 30% and requires only 0.41% and 0.59% more of the world’s land for footprint and spacing, respectively. We suggest producing all new energy with WWS by 2030 and replacing the pre-existing energy by 2050. Barriers to the plan are primarily social and political, not technological or economic. The energy cost in a WWS world should be similar to that today.

How will we build it? Well, the numbers at first look daunting.

But given how rapidly a modern industrial nation can build things like tanks and airplanes — as the American experience during the Second World War proves — the author’s argument that we DO have the technology is pretty convincing. That’s not to say that the proviso of “Barriers to the plan are primarily social and political, not technological or economic” isn’t important. But it puts the lie to the argument of TBI, Richter et al. that even if we wanted to make the switch, we couldn’t.

What I find most intriguing about Jacobson and Delucchi’s vision is that it doesn’t include ANY contribution from nuclear. There are good reasons for this, even apart from the security threat that proliferation poses. Jacobson makes a slam-dunk case against nuclear in this TED presentation. My point is that, if we assume for sake of the argument that Jacobson is wrong about nuclear’s problems and grant some contribution from reactors — reaching the goal of a “clean” 2050 only gets easier.

(I don’t think Jacobson is wrong. Nuclear reactors do take too long to build and are too expensive, but we will probably have to accept a few new nukes as part of a compromise with those who oppose restrictions on fossil-fuel emissions.)

The WWF also decided to exclude nuclear in its recent report on the subject. The Energy Report: 100% Renewable Energy by 2050 makes many of the same observations as the peer-reviewed papers in Energy Policy. Plus it comes with lots of eye-catching photos and charts, instead of the dry tables that Jacobson and Delucchi’s medium favors.

Drawing on the expertise of the EcoSys energy consultancy, WWF says:

…it is technically feasible to supply everyone on the planet with the energy they need, with 95 percent of this energy coming from renewable sources.

To get all the way to 100%, WWF proposes some “social and technological changes.” But I say 95% is pretty good. Certainly enough to avoid the worst of what climate change has in store on a business-as-usual path. And really, some of those changes aren’t so radical. The WWF reminds us that governments subsidize fossil fuel use to the tune of $700 billion a year. Imagine if that kind of money was funneled to renewables instead.

These two studies aren’t going to be enough to sway the powers that be, of course. But if they represent just first of a deluge of such thinking, then maybe, just maybe, we’ll remember them as the light that came at the end of tunnel.