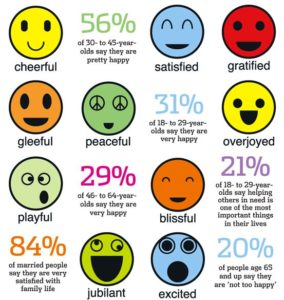 The relentless pursuit of happiness may be doing us more harm than good.

Some researchers say happiness as people usually think of it—the experience of pleasure or positive feelings—is far less important to physical health than the type of well-being that comes from engaging in meaningful activity. Researchers refer to this latter state as “eudaimonic well-being.”

Happiness research, a field known as “positive psychology,” is exploding. Some of the newest evidence suggests that people who focus on living with a sense of purpose as they age are more likely to remain cognitively intact, have better mental health and even live longer than people who focus on achieving feelings of happiness.

In fact, in some cases, too much focus on feeling happy can actually lead to feeling less happy, researchers say.

The pleasure that comes with, say, a good meal, an entertaining movie or an important win for one’s sports team—a feeling called “hedonic well-being”—tends to be short-term and fleeting. Raising children, volunteering or going to medical school may be less pleasurable day to day. But these pursuits give a sense of fulfillment, of being the best one can be, particularly in the long run.

“Sometimes things that really matter most are not conducive to short-term happiness,” says Carol Ryff, a professor and director of the Institute on Aging at the University of Wisconsin, Madison.

“Eudaimonia” is a Greek word associated with Aristotle and often mistranslated as “happiness”—which has contributed to misunderstandings about what happiness is. Some experts say Aristotle meant “well-being” when he wrote that humans can attain eudaimonia by fulfilling their potential. Today, the goal of understanding happiness and well-being, beyond philosophical interest, is part of a broad inquiry into aging and why some people avoid early death and disease. Psychologists investigating eudaimonic versus hedonic types of happiness over the past five to 10 years have looked at each type’s unique effects on physical and psychological health.

For instance, symptoms of depression, paranoia and psychopathology have increased among generations of American college students from 1938 to 2007, according to a statistical review published in 2010 in Clinical Psychology Review. Researchers at San Diego State University who conducted the analysis pointed to increasing cultural emphasis in the U.S. on materialism and status, which emphasize hedonic happiness, and decreasing attention to community and meaning in life, as possible explanations.

Since 1995, Dr. Ryff and her Wisconsin team have been studying some 7,000 individuals and examining factors that influence health and well-being from middle age through old age in a study called MIDUS, or the Mid-Life in the U.S. National Study of Americans, funded by the National Institute on Aging. Eudaimonic well-being “reduces the bite” of risk factors normally associated with disease like low education level, using biological measures, according to their recently published findings on a subset of study participants.

David Bennett, director of the Alzheimer’s Disease Center at Rush University Medical Center in Chicago, and his colleagues showed that eudaimonic well-being conferred benefits related to Alzheimer’s. Over a seven-year period, those reporting a lesser sense of purpose in life were more than twice as likely to develop Alzheimer’s disease compared with those reporting greater purpose in life, according to an analysis published in the journal Archives of General Psychiatry. The study involved 950 individuals with a mean age of about 80 at the start of the study.

In a separate analysis of the same group of subjects, researchers have found those with greater purpose in life were less likely to be impaired in carrying out living and mobility functions, like housekeeping, managing money and walking up or down stairs. And over a five-year period they were significantly less likely to die—by some 57%— than those with low purpose in life.

The link persisted even after researchers took into account variables that could be related to well-being and happiness, such as depressive symptoms, neuroticism, medical conditions and income.

“I think people would like to be happy,” says Dr. Bennett. “But, you know, life has challenges. A lot of it is how you confront those challenges.”

It could be that people with high eudaimonic well-being are good at reappraising situations and using the brain more actively to see the positives, Dr. van Reekum says. They may think, “This event is difficult but I can do it,” she says. Rather than running away from a difficult situation, they see it as challenging.

The two types of well-being aren’t necessarily at odds, and there is overlap. Striving to live a meaningful life or to do good work should bring about feelings of happiness, of course. But people who primarily seek extrinsic rewards, such as money or status, often aren’t as happy, says Richard Ryan, professor of psychology, psychiatry and education at the University of Rochester.

Simply engaging in activities that are likely to promote eudaimonic well-being, such as helping others, doesn’t seem to yield a psychological benefit if people feel pressured to do them, according to a study Dr. Ryan and a colleague published last year in the Journal of Personality and Social Psychology. “When people say, ‘In the long-run, this will get me some reward,’ that person doesn’t get as much benefit,” he says.

There’s nothing wrong with trying to feel happy, psychologists say. Happy people tend to be more sociable and energetic, which may lead them to engage in meaningful activities. And for someone who is chronically angry or depressed, the goal should be to help this person feel happier, says Ed Diener, a retired professor at the University of Illinois who advises pollster Gallup, Inc., on well-being and positive psychology.

Surveys have shown the typical person usually feels more positive than neutral, yet it isn’t clear he or she needs to be any happier, Dr. Diener says. But there is such a thing as too much focus on happiness. Ruminating too much about oneself can become a vicious cycle. Fixating on being happy “in itself can become a psychological burden,” Dr. Ryff says.

Being happy doesn’t mean feeling elated all the time. Deep stress is bad, but the “I don’t have enough time” stress that many people feel while balancing work, family and other demands may not be so bad, Dr. Diener says. To improve feelings of happiness and eudaimonia, focus on relationships and work that you love, Dr. Diener says, adding, “Quit sitting around worrying about yourself and get focused on your goals.”

7 Responses to Hedonic and Eudaimonic Happiness