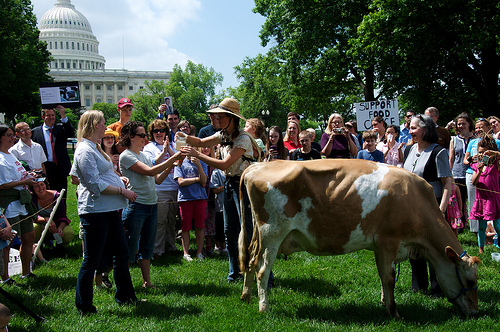 Bringing Cows to the U.S. Capitol

A resounding theme of May 16th’s Rally for Food and Farm Freedom on the Hill was that the FDA’s recent arrest of Amish farmer Dan Allgyer for selling raw milk was not about food safety; it was about economics and keeping control of the food supply in the hands of big business, instead of giving power to the consumer.

Organizers took power – and sustenance – into their own hands by creating an impressive showing at the rally in Upper Senate Park, and by drinking the controversial liquid, milked fresh onsite from Morgan the cow, who was trailered in from a Maryland dairy farm.

Raw milk drinkers are a passionate bunch. Rally organizer Liz Reitzig, a mother of four who is pregnant with her fifth child, noted that many mothers become food activists in an effort to feed their children the best food they possibly can.

Reitzig noted that among the 450 rally participants were a considerable number of mothers, there to show “the profound impact that switching to raw milk has made for their children and families.”

Weston A. Price Foundation president Sally Fallon Morell described the health benefits of raw milk, which she called a “magic food” that she bought off the shelves for her family when living in California as a young mother. Fallon Morell declared that this century’s rallying cry is going to be about food and farm freedom.

“The USDA and the FDA present two falsehoods,” she said. One is that there is no nutritional difference between raw and pasteurized milk. A European study found raw milk to be the number one factor in preventing allergies and asthma, Fallon Morell said.

She also asserted that the second fallacy – that raw milk is dangerous – is based on “40-year-old science.” Raw milk has immune-system boosters, and “you can’t get pathogens to grow in it.”

Raw, grass-fed milk not only contains live enzymes crucial to digestion – enzymes that are killed by pasteurization – but it is free of antibiotics and hormones, and from pesticides from sprayed grain, which is often genetically-modified.

One speaker said the government is presenting consumers with a choice that is not a choice: poison ourselves with factory-farmed food or starve.

Customers who bought from farmer Allgyer had already contracted to own their food, and speakers criticized the government for standing in their way to eat the food they choose and have paid for.

Representative Ron Paul (R-Tex.) has recently introduced legislation for the interstate sales of raw milk, which is legal for sale in ten states, but illegal in some others, though, as a Washington Post article recently explained, consumers seeking the substance can find a way to get it.

Mother of two, Wendy Lubell Snyder, was among the many that turned out to support their right to consume the food they want. A personal trainer in Washington, DC, Lubell Snyder resisted drinking pasteurized milk growing up. As an adult, she researched the topic, and found that the science behind raw milk made a lot of sense.

As 16-month-old daughter Sage tasted a sample, Lubell Snyder said she feels great as a raw milk consumer now. “I’m here to support my right to choose what to eat and drink, and to uphold the Constitution,” she explained.

One sign in the swelling crowd reminded participants that the authors of the Constitution drank raw milk. Another sign read: “Junk food is legal. Don’t outlaw real food!”

Speakers urged consumers committed to eating nutrient-dense food to continue to stand up for their right to protect their health through access to live food that is free of pesticides, hormones, and antibiotics, and has minimal environmental impact.

This article originally appeared in the Washington Times Communities section.

2 Responses to Bringing Cows to the U.S. Capitol