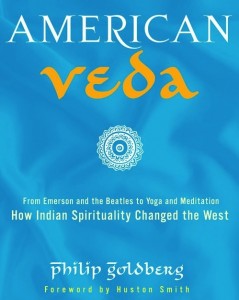 Philip Goldberg, American Veda: From Emerson and the Beatles to Yoga and Meditation: How Indian Spirituality Changed the West. Harmony Books, 2010.

A Methodist church near my house advertises for “Gentle Yoga Classes” on one of those church signs usually reserved for witty and redemptive one-liners like “Jesus: Your Get Out of Hell Free Card.” Meanwhile, a local pizza place lists a “Kosmic Karma” pie on its menu. Indian spiritual language has crept into American vernacular culture. But where did it come from? Is there some connection between karmic pizza and yoga in church?

In American Veda, Philip Goldberg tells the story of a new American tradition, derived from both the practices of yoga, and the philosophy of Vedanta. He names this “Vedanta-Yoga,” as distinguished from other aspects of Hindu religious culture (such as the worship of multi-limbed deities) that might be less meaningful for Americans.

For Goldberg, it all adds up to the slow “Vedicization” of American spirituality. By this he means that Americans have become more comfortable with a view of the world ultimately found in the ancient literature of India—the Vedas, the Upanisads, and the Bhagavad-gita. First, there is the idea that the self and the ground of Being (or the Divine, God, Brahman, Consciousness, etc.) are one. The full realization of this truth leads to liberation and the cessation of suffering. Second, there are a number of paths toward this realization and no single path works for everyone. Third, it follows then that, at bottom, all religious and spiritual traditions, while looking different, share the same goal of divine realization. Vedanta-Yoga is thus a monist, pluralist, and perennialist tradition of American spirituality built from Indian religious sources.

In the nineteenth century the first wave of Vedic thought broke on American shores. Transcendentalists, including Henry David Thoreau and Ralph Waldo Emerson, read the Bhagavad Gita and found in it a spiritual solution to the materialism of early American industrialism. Helena Blavatsky and Henry Steel Olcott turned to Vedic sources and combined them with Western esoteric and occult traditions to produce Theosophy. Goldberg also finds Vedic influences in the 19th-century births of Christian Science and New Thought movements.

The nineteenth century was capped off with the 1893 arrival of Swami Vivekananda, a Hindu monk and disciple of the Bengali guru Ramakrishna, to the World’s Parliament of Religions in Chicago where he spoke to a crowd of liberal Protestants about the basics of Vedanta philosophy. Vivekananda stuck around and established the Vedanta Societies that are still with us today. Vivekananda offered a flesh and blood example of the Vedic philosophy Americans had found in ancient Indian texts throughout the century.

The second wave of Vedic influence reached its apex in the counterculture of the 1960s but has its roots in much earlier in the twentieth century. Decades before the Beatles met the Maharishi, a set of public intellectuals that included the likes of Joseph Campbell and Aldous Huxley propagated Vedic ideas they learned from Vivekananda’s Vedanta Society. The popularity of Swami Yogananda and his Autobiography of a Yogi gave Vedanta-Yoga further steam in the middle of the century. In the 1950s, the writings of Indian gurus like Sri Aurobindo found their way into America and the American Academy of Asian Studies was founded in 1951. Then came the Maharishi. Maharishi Mahesh Yogi founded Transcendental Meditation and taught the Beatles to meditate. The Hare Krishnas came too. By the 1970s, following changes in American immigration laws, a whole generation of Indian gurus and yogis brought Vedanta-Yoga to America. Goldberg calls these the “Baby Boomer’s Babas.” This was the period of building institutions for Americans to practice yoga, meditate, pursue the study of Vedanta, and gather around a guru.

In the wake of institution-building the final wave pushed Vedanta-Yoga out into the broader cultural streams. Homegrown American advocates such as Ram Dass and Deepak Chopra emerged. Academic “pandit practitioners” taught in religion and theology departments, deepening Americans’ understanding of Vedic thought. Artists like John Coltrane were drawn to Vedic philosophy and Indian music. In the field of science, physicists saw a parallel to their discoveries in quantum physics in Vedanta philosophy.

Vedanta-Yoga became such a part of of American culture that other religions could apparently not resist it—thus came Christian yoga, Jewish yoga, and the sign at my local Methodist church. The Vedicization of America continues, argues Goldberg, as the millennial generation absorbs Vedic ideas and yogic practices. For Goldberg, the “spiritual but not religious crowd” is just the latest version of American Vedanta-Yoga.

A Nation of Pragmatic Mystics

Goldberg’s narrative is expansive. He constructs a broad history for Vedanta-Yoga in America that ranges from Madonna to religion scholar Huston Smith. But more than just expansive, Goldberg’s narrative is itself ever-expanding. It is a story of cultural development that mirrors the personal development of the yogi or vedantan. As Goldberg tells it, from its earliest nineteenth century encounter forward, American culture has been on a path of enlightenment and liberation that continues toward more and more spiritual freedom. Built into this narrative of national and cultural development enlightenment are tropes of the free market. Gurus and yogis succeeded in the religious marketplace, Goldberg argues, because they provided Americans spiritual commodities that worked. Furthermore, those yogis and gurus that were best able to adapt themselves to the American market were most successful. Yoga, stripped down to poses, whipped people into shape. Transcendental Meditation (which Maharishi stressed was a practice and not religious) lowered stress. Vedanta-Yoga offered a spiritual wholeness to practitioners but also adapted to the market. But Vedic teaching and practice worked, so Americans bought it. As Goldberg puts it, we are a nation of “pragmatic mystics.”

If there is one problem at the heart of Goldberg’s analysis, though, it is his reliance on a reductive vision of the difference between East and West. As Goldberg tells it, in the past two centuries the spiritual East (read India) has brought spirituality to the materialist West. In this view, the West is materialist, outward, scientific, and ego-building while the East is spiritual, inward, mystical, and ego-transcending. Vedicization, then, is the synthesis of these two poles into a new American spirituality of practical mysticism.

Such a narrative ignores both material realities in India and spiritual realities in America. To pick just one example, Swami Vivekananda was the product of a Bengali society greatly affected by British imperialism. He was part of a nouveau riche class in and around Calcutta. He got a Western education from a Protestant missionary college and he was the product of the Bengali Renaissance triggered by the economic, colonial, and cultural encounter between Indians and Britons. Meanwhile, American culture has its own history of mystical, esoteric, and spiritual resources. While Theosophists, Christian Scientists, Transcendentalists, and New Thoughters were influenced by Vedic texts, they were also part of a long Western tradition of esotericism and metaphysics. Emmanuel Swedenborg and Franz Anton Mesmer had has much if not more influence on these groups as Vedic texts. The “spiritual East comes to the material West” narrative is powerful but it is over-simple.

This is not just Goldberg’s narrative. It was also Emerson’s, Vivekananda’s, and the Maharishi’s. In this way, Goldberg is writing from within the Vedanta-Yoga tradition he describes. I doubt he would dispute this. This position within the tradition has given him a passion and a vision for all the ways it has influenced America, and Goldberg’s book offers a wonderfully comprehensive account of the many places Vedanta-Yoga has filtered into our culture.

While his advocacy for the cause may oversimplify things at times, the accessibility of his writing and the broad scope of his material make up for it. For “the spiritual but not religious” wondering how they got there, for those wondering who those Indian dudes are on the cover of Sergeant Pepper, and for Methodists doing yoga, Goldberg offers an important story of America’s practical mysticism.