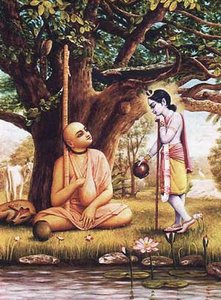 By B. R. Sridhara Goswami

Sri Madhavendra Puri is the sprout of the great tree of devotional love represented in the world by Sri Caitanya Mahaprabhu. Madhavendra Puri comes from the line of Sri Madhva, the acarya of the Dwaita (dualistic) philosophy, one of the four theistic Vaishnava schools of ancient India. As Brahma, the creator himself, is the pioneer of the faith, the school is also known as the Brahma sampradaya.

The description of the line of succession of the acaryas from Brahma to Madhva varies. Some count it as Brahma, Sanaka, Durvasa, Acyutrapreksa, Madhva; while a sober section hold the line to be Brahma, Narada, Vyasa, Madhva. Although Sri Madhva took his ascetic order formally from Acyutapreksa, he was in severe opposition to the professed creed of his formal guru both before and after accepting the ascetic order. Besides, Madhva’s propaganda before he met Sri Vyasa was clearly limited to a destructive line of vanquishing mayavada, and it is only after he came under the divine feet of Vyasadeva, the great world teacher of theism, that he took up the constructive side of regular preaching, and made converts and commentaries as an authorized acarya. Acyutapreksa, his former guru, then submitted to him and was converted fully to transcendental dualism from the mayavada of Sankara. Therefore, the opinion that Sri Madhva, as an acarya preaching the positive principle of transcendental dualism, comes in the line of Sri Vyasa is considered more valid and is accepted by the wiser section.

In answer to that, a section in the Madhva community wants to say that though “Tirtha,” having its sacred association with “Ananda Tirtha” – Madhva himself, found special favor in the school and got prominence as a general title of the sannyasins of the community, “Puri” and other titles were not absent altogether. The Madhvas assert that Sri Madhva himself, as well as his successors, converted many sannyasins of the Sankara school and allowed them to retain their former titles to demonstrate their victories over mayavada, and thus Madhavendra Puri must either be a disciple of such a convert or a direct convert. But as this section cannot show any authentic record sufficient to prove their statement, we do not find any reason to accept mere assertion.

The Gaudiya Vaishnava section, however, holds that Sripad Madhavendra Puri, as a guru of the doctrine of transcendental love, must have accepted his diksa (divine initiation) from the bona fide line of transcendental dualism of Madhvacarya, though he might have taken his sannyasa (formal ascetic order) from another community. This section attaches the real importance to diksa and points out the remarkable difference with which a Vaishnava acarya treats the formal taking of an ascetic order as opposed to diksa. This party draws our attention to Madhvacarya himself who took his sannyasa from Acyutapreksa of the mayavada school only to refute the professed faith of his very guru.

The fact that the Vaishnava school does not attach much importance to this external formality of the ascetic order, but considers it merely an ostentatious advantage for propaganda work, is also maintained by Sri Ramanuja’s example of going through the order himself without the help of a guru of any sect whatsoever. On the other hand, the same Ramanujacarya was seen perseveringly trying for grace (in the form of mantra diksa) from a Vaishnava guru, times without number. Later on, Sri Caitanya too, showing his anxiety for sannyasa, took it at once from Kesava Bharati of the Sankara school after giving him necessary instructions for the same. Sri Caitanya has mentioned in modest sportive expression at times this mayavada connection, which an adventurous and interested critic often misreads and very prudently gives his decree to count Sri Caitanya as one in the mayavada fold.

So it is not definitely known whether Sripada Madhavendra Puri accepted the ascetic order from Madhva sampradaya. But it is sure that he was an acarya of that sampradaya. it is also sure that he was not a mere convert from any other sect. This is so because his faith and love for Sri Krishna and his service was far too sublime and soaring to keep him even within the bounds of Madhva school itself, what to speak of mayavada theory, which propounds God, soul, and service all as illusion. In fact, Madhavendra Puri was not sadhana-siddha, that is, he did not have to realize his goal in this life, but he was nitya-siddha, eternally self-realized.

Trouble, however, arises again as to the adjustment of several names in the pontifical list from Madhva to Madhavendra Puri. Empirical inquiry, ignorant of the real nature and object of spiritual lineage, finds itself in a blind lane while meddling with matter beyond its scope trying to break through the walls with animal wrath. Therefore, the correct reading of pontifical line depends on our sound knowledge of sampradaya-rahasya (esoteric techniques of spiritual society.) When really blessed with such light alone, we can find that sometimes names of remarkable contemporaries are retained and sometimes names that are not very prominent are omitted from the pontifical list.

The greatness and importance of Sri Madhavendra Puri, however, does not rely so much in his being a mere bona fide member of the Madhva community as in his being the pioneer of the faith of transcendental love of Sri Krishna, which Sri Caitanyadeva descended on earth to proclaim. The first effective start of madhurya-rasa upasana, or consort-service to the youthful Krishna, was really given by Sri Madhavendra Puri. Although the services to Krishna as the gopis rendered them in Vrindavana were not unknown in Madhva mathas, the object of their service was Bala Gopala, and thus their mood of service could naturally only be in vatsalya-rasa, or parental affection. The famous poems of Sripad Madhavendra Goswami beginning with “ayidina-dayadrea-natha,” “kamprati kathaitumese,” and “syamam eva param ruam,” not only indicate the highest achievement of the author but prove that even men of high religious culture of the time were quite strangers to the sublime thought of deep consort-love to ever-youthful Krishna, Reality the Beautiful. There is also a hint in his poem of the advent of a great apostle who would inaugurate extensive and organized propagation of this blossoming doctrine of sweet consort-service to the youthful and beautiful supreme person Sri Krishna. It is not difficult to see that this has happened with the appearance of the great Lord Caitanya Deva and his overflowing distribution of the nectarine treasure of loving service to the Supreme Krishna.. Sri Nityananda, Sri Adwaitacarya, Sri Iswara Puri, Sri Ranga Puri, Raghupati Upadhyaya, and many other towering personalities of great religious and social importance of the time expressed their high reverence and spiritual indebtedness to this great saint and savior of mankind.

This article was first published in Srila Bhaktisiddhanta Saraswati Prabhupada’s Harmonist in 1936.