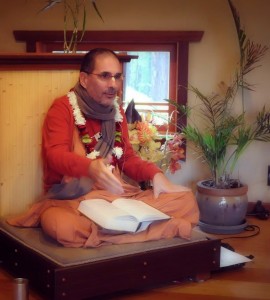 Q. I regularly read Sanga and find it very scholarly and free of envy of other spiritual groups. However, a guru who belongs to another organization initiated me, and your approach to the teachings is somewhat different than his. Is this a problem.

A. I am happy to know that my writings have been helpful to you. Our diksa guru connects us to the sampradaya of Sri Caitanya Mahaprabhu by initiating us into the chanting of Krishna nama and Krishna mantra. Within Mahaprabhu’s sampradaya there are many instructing (siksa) gurus capable of helping us take advantage of the mantras imparted to us by our diksa guru. While the instructions of gurus may vary regarding details, they are one in principle, as they all teach the same subject: love of Krishna.  My writing tends to focus on principles rather than on details. If anything I write differs from details that you have heard from your diksa guru, then I hope you will be mature enough to be able to sort that out for yourself.

Q. What if a person has an attraction for an advanced Vaishnava other than his or her own guru?

A. It is not uncommon for a disciple initiated by one guru to develop an affinity for another sadhu in the same lineage. In Gaudiya Vaishnavism there is a long history of this, and we find instances of it even among the eternal associates of Sri Caitanya Mahaprabhu. Two prominent examples are Sri Raghunatha dasa and Sri Krishnadasa Kaviraja Goswami, who each developed deeper attachment to their siksa gurus than to their diksa gurus. While respecting all of our teachers, we may be drawn more to one than to another, and that guru or teacher will naturally have a special place in our heart. We should follow our heart to the extent that its attraction does not take us beyond the parameters of scriptural advice.

Practically speaking, the most important guru to any disciple is the one who is helping him or her make spiritual progress at that particular point in time. A truly qualified guru will be interested only in our spiritual progress, nothing more. If our initiating guru sees that another sadhu is better suited to help us, he or she will encourage us to take advantage of that association. Of course, a disciple may become attracted to another guru, or even a so-called guru, for less than spiritual reasons. Therefore, the initiating guru may have to carefully consider the matter before he or she blesses the disciple to take guidance from another teacher on an ongoing basis.

In any event, the task before the disciple remains the same: to always place oneself under the guidance of a higher Vaishnava. At times this may not be a popular or easy thing to do, but it is certainly imperative for spiritual advancement. Making spiritual progress takes a lifetime of commitment, or more accurately, many lifetimes. While there may seem to be greener pastures elsewhere, before concluding that the present pasture can no longer nourish us, we must be careful to make the best use of our present learning environment regardless of any difficulties we are facing.

Q. I lost faith in my spiritual master and the institution that he belongs to. Is there a proper way to end my relationship with him? Should I give back the japa beads that he chanted upon and gave me?

A. It is important to be grateful to all those who have helped us make progress in spiritual life, regardless of their shortcomings. If we find that for scripturally sound reasons we have to end a relationship with a particular Vaishnava who served us in the capacity of guru, we should begin by expressing gratitude for everything that devotee has done for us. However, this would be a rare case. In many cases there is no need to end one’s relationship with an initiating guru whose lack of knowledge or poor character shows itself at some point. Instead, one can simply place oneself under the guidance of a highly qualified instructing guru and continue to respect one’s initiating guru from a distance. However, if the guru’s moral character deteriorates and his or her standing in actual Vaishnavism becomes negligible, there is sufficient cause to break one’s relationship with such a guru altogether. The illustrious Bhaktisiddhanta Saraswati Thakura made this abundantly clear by his example that involved exposing pseudo-Vaishnava gurus and reinitiating their disciples.

Hopefully your loss of faith in one Vaishnava and the institution he is affiliated with is not a loss of faith in the ideal of Gaudiya Vaishnavism altogether. Of course, people can reject their guru for the wrong reasons, but I pray that this is not the case in your circumstances. I also pray that you will continue your spiritual life under good guidance.

Q. Can a devotee who is not self-realized but who strictly follows the instructions of scripture and his spiritual master become a diksa guru? Would such a guru be able to deliver his disciples by giving them the same siksa he has received?

His description of three types of gurus roughly corresponds with Sri Jiva Goswami’s following description of three types of maha bhagavatas (superlative devotees): (1) The bhagavat-parsada-deha-prapta is one who has attained his or her spiritual body and is fully functioning within it. An example of this type of devotee is Narada, who upon attaining perfection received his vina and a suitable spiritual form from Bhagavan. (2) The nirdhuta-kasaya is one who is free from material desire but not yet perfect in terms of the cultivation of love of God. An example of this kind of devotee is Sukadeva Goswami, who although free from material desire (nirgrantha) became interested in the lila of Krishna. (3) The murcchita-kasaya is one who is not entirely free from the influence of the mode of goodness (sattva-guna) but whose absorption in bhakti is such that any seed of material desire that remains in his or her heart has no opportunity to fructify. An example of this type of devotee is Narada, who was blessed with Bhagavan’s darsana before his realization was perfect, a blessing intended to inspire him to perfect himself.

Another example given is that if one follows the sun fast enough one will always bask in its rays, even though one has not yet attained the sun globe. Similarly, one who proceeds steadily in the direction of prema, guided by a taste for divine service, is always blessed by Bhagavan, even though he or she has yet to attain prema. Following the lead of such a devotee is a safe course to take.

Q. Thank you so very much for your teachings and your books. I particularly love your commentary on Bhagavad-gita. I am very interested in becoming your student and perhaps being initiated. How would I go about doing this?

A. Sri Rupa Goswami explains that to advance in Krishna consciousness there are four things that should be in place. He writes:

“One must take shelter of sri guru, receive diksa and siksa from him or her, render faithful affectionate service to the guru, and follow the path of the saints.”

Taking shelter means that after hearing from the guru for some time, the beginner or novice who has developed faith and affection for the guru sincerely approaches him or her for initiation. During this period the guru in turn considers the qualifications and sincerity of the novice. If the guru feels that he or she is sincere, the guru will impart the mantra (diksa) to the novice, explaining its significance along with other relevant instructions (siksa). The initiate is then required to render faithful affectionate service to the guru. Ongoing devotion to guru and Krishna in the association of advanced devotees is what Sri Rupa is referring to when he tells us to follow the path of the saints. Only through such devoted service (bhakti) can the import of the mantra be realized.

While details may vary, these principles from Sri Rupa form the foundation of all bona fide guru-disciple relationships in the Gaudiya Vaishnava sampradaya. Anyone desirous of making real progress in Krishna bhakti should consider them carefully and take them to heart. The guru manifests to the disciple though his words; being in his physical presence at all times is not required. Therefore, those interested in becoming my initiated students must first hear from me for some time. This can be done by listening to my lectures (see www.swamitripurari.com). They should also study my books and other Gaudiya literature, as well as the Sanga archives posted on my website. If they are inspired by my words and are ready to follow the path of the saints as Sri Rupa says, then they can meet with me at one of my monasteries; Audarya, Madhuvan, or Saragrahi, to discuss initiation.

In any case, I am very pleased to hear that you are appreciating my commentary on the Bhagavad-gita and that you want to advance in Krishna consciousness. Bless you for your interest in the path of Sri Caitanya Mahaprabhu. I pray that by his grace, you will overcome all obstacles and find shelter at the feet of a bona fide guru in the Gaudiya sampradaya.