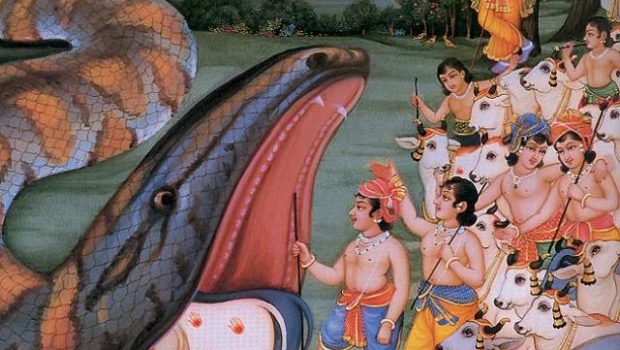 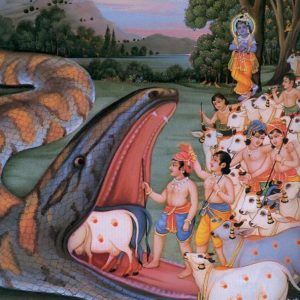 Q. Are the demons that Krishna fights within his earthly play (prakata-lila) his eternal associates? It appears not, as in the spiritual world there are no demons or nondevotees. However, it is said that Putana, the female demon who was killed by baby Krishna, attained a position in the spiritual world as his nurse, so she must have been fully purified of contamination due to contact with him. Since Krishna’s lilas are eternal what happens to those who play the parts of demons in his prakata-lilas?

A. Sri Jiva Goswami says that one of the distinguishing features of Sri Krishna is that when he kills demons they attain spiritual liberation (mukti), which is a characteristic that is unique among all appearances of the Godhead. Five types of mukti are mentioned in the scriptures. They are salokya (being promoted to the realm of God), samipya (becoming an associate of God), sarupya (attaining a form like that of God), sarsti (attaining opulences like those of God), and sayujya (merging into the effulgence of God). Of the five types of mukti, Gaudiya Vaishnavas reject sayujya because it is devoid of an intimate personal relationship with Sri Krishna. Actually, devotees of Krishna are not interested in attaining any kind of mukti. In Srimad-Bhagavatam Krishna says, salokya-sarsti-samipya-sarupyaikatvam apy uta diyamanam na grhnanti vina mat-sevanam janah: “My devotees do not accept salokya, sarsti, sarupya, samipya, or oneness with me (sayujya)—even if I offer these liberations—in preference to serving me.” (SB 3.29.13)

As for the demons killed by Krishna, most attained sayujya-mukti. Some, such as Aghasura and Paundraka, attained sarupya-mukti, and others attained the status that they had previous to appearing as demons and from there progressed on to attain prema (divine love). Of these, only the demoness Putana directly attained prema. This is because in a motherly manner she offered baby Krishna her breast milk. Although she was attempting to kill him, Krishna mercifully accepted her in this way—as his nurse, whereby she attained his eternal abode. Thus it is clear that the demons appearing in the prakata-lila other than the appearances of Jaya and Vijaya are not Krishna’s eternal associates but rather materially conditioned souls who for various reasons appear as demons during his manifest lila. Many of these reasons are explained in Sri Garga-samhita, wherein the previous lives of many demons are revealed. A Bengali translation from the original Sanskrit by Pujyapada Sridhara Deva Goswami is in print.

Srila Visvanatha Cakravarti Thakura points out that Krishna’s apparent punishment of the demons or unrighteous is in fact an act of mercy because the final result of this punishment is liberation. Srila Baladeva Vidyabhusana in his Govinda Bhasya commentary on Vedanta-sutra says that the demons killed by Krishna experience not only the death of their gross material body but the demise of their subtle body as well. The subtle body carries the soul from one gross body to another. The subtle body consisting of a state of mind is the basis of the gross body that one acquires in the next life. When the subtle body of the unrighteous person is destroyed by Krishna, the person’s attitude toward him immediately changes, for his opposition to Krishna was a product of his subtle body–his unrighteous disposition. On the demise of the subtle body, his hostility toward Krishna is transformed into love for Krishna. Thus at the moment of death he sees Krishna as the greatest object of affection. His liberation is not directly a result of being killed by Krishna but rather the result of his newfound love for him.

Jaya and Vijaya, the devotees of Vishnu who came to the material world and played the role of demons, are of course exceptions. Sri Jiva Goswami writes in Krsna-sandarbha that these two gatekeepers of Vaikuntha do not appear every time the lila is manifest, but rather materially conditioned souls come to play the roles these devotees had played in the lila in accordance with the will of Bhagavan. In his Laghu Bhagavatamrta, Sri Rupa Goswami cites Visnu Purana‘s conversation between Maitreya and Parasurama concerning Jaya and Vijaya. Srila Prabhupada comments on this section of the Purana and Sri Rupa Goswami’s insight as follows:

Thus it appears that whenever Krishna lila manifests the roles of demons are usually filled by different souls. Krishna’s killings of demons are not eternal lilas but rather occasional, and as such they are much more open to variation than his eternal lila is. However, Gaura-ganoddesa-dipika informs us that the former doorkeepers of Vaikuntha, Jaya and Vijaya, did again appear as demoniac persons during the lila of Sri Caitanya Mahaprabhu. They appeared as the drunken brothers Jagai and Madhai, who offended and assaulted Mahaprabhu’s principal associate Nityananda Prabhu. In the mood of Krishna the demon slayer, Caitanya Mahaprabhu was about to kill these two miscreants, but Nityananda stopped him and instead bestowed mercy upon them–turning them into devotees. He kept Mahaprabhu from killing them by reminding him that in this age (Kali-yuga) everyone is more or less unrighteous and deserving of punishment. Rather than chastisement, in Kali-yuga the unrighteous are delivered by the holy name of Krishna whereby they are cleansed of their sinful nature and ultimately liberated in Krishna prema—pure love of God.

See also: With the Help of the Asuras

Q. You say that Gaudiya Vaishnavas reject sayujya mukti because it is devoid of an intimate personal relationship with Krishna. However, don’t some Vaishnava sects understand sayujya mukti in a more positive light?

A. The sruti says, dva suparna sayujya: “two in sayujya,” indicating that sayujya can be understood to be the basis of all other types of liberation. So sayujya mukti does carry different meanings for different Vaishnava sects, some of which are positive. Particularly, the Madhva and Ramanuja sects understand sayujya as being a sense of oneness or intimacy with God. This is differentiated from the Gaudiya notion of sayujya as merging into the effulgence of God and being devoid of a relationship with him. We follow Sri Krsnadasa Kaviraja, who in Caitanya-caritamrta clearly distinguishes sayujya mukti from other types of liberation. He describes sayujya as being outside the gates of Vaikuntha, the transcendental world of Krishna/Narayana.

To obtain further insight on this topic read my commentary on Gopala-tapani Upanisad: http://swamitripurari.com/2010/08/gopala-tapani-upanisad/

One Response to Sanga: Liberating the Demons