In Praise of My Param Guru 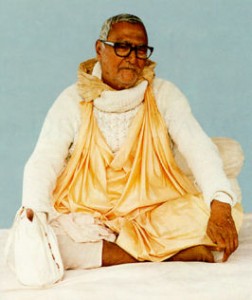 To date, much of the glorification of Srila Bhakti Raksaka Sridhara Deva Goswami within the international Gaudiya Vaishnava community has, out of necessity, centered around his long and loving relationship with his dear Godbrother, Srila Bhaktivedanta Swami Prabhupada. This relationship certainly warrants limitless praise, but unfortunately such glorification has for the most part been necessary to counteract widespread ignorance and propaganda as to the character of Srila Sridhara Maharaja, his relationship with Srila Prabhupada, and his historical role in the lives of Srila Prabhupada’s disciples; essentially, it has consisted primarily of an effort to justify his place in the hearts of thousands who have found great inspiration and solace in his words and personality. It certainly behooves all members of the international Gaudiya community to be well acquainted with these matters, but it is also important for us to know Srila Sridhara Maharaja as he stands alone, fully illustrious in his own right.

Srila Sridhara Maharaja was born in 1895 in Hapaniya, West Bengal. Although his family was one of highly respected brahmanas, his paternal lineage, in his own words, “hated the followers of Caitanyadeva.” Throughout his childhood he showed signs of his spiritual inclination as well as his exceptional intelligence and spotless character. In recorded lectures he endearingly recounts how initially he was drawn to the sacrificing nature and “model pastimes” of Ramachandra more so than to Krishna of Vrindavana, who was, as he put it, “a liar and girl-hunter.” In a similar vein, as a child and into adulthood, Srila Sridhara Maharaja had never told a lie, laying the foundation for his distinct ability to palatably convey the truth throughout his life. His general tendencies toward simplicity, honesty, and practicality came to be some of his trademark characteristics within the Gaudiya Matha, where he was widely respected for his “strong common sense and disinterested nature.”1

His godbrothers’ respect for him was unmistakeable. It was common for others to approach him for clarification of philosophical points raised by Srila Saraswati Thakura during his discourses. His perspective was so valued that later, during the splintering of the Gaudiya Matha after Bhaktisiddhanta’s departure, the two factions approached Srila Sridhara Maharaja for his opinion as to how to proceed, although he had personally already withdrawn from participation in the situation. Moving forward, as the Gaudiya Matha eventually settled into a number of individual mathas (some of which were quite antagonistic to each other) most of the acaryas from these groups still held Srila Sridhara Maharaja in high regard, celebrating his Vyasa-puja and visiting his matha, often seeking his valued counsel. When these godbrother acaryas would approach him, they would characteristically pay their respects to him from the road outside his matha before entering its gates. Prior to ever leaving India, Srila Bhaktivedanta Swami Prabhupada wanted to organize an entire mission with Srila Sridhara Maharaja as the presiding acarya.

Quite a few books have been printed and made widely available based on the recorded discourses that Srila Sridhara Maharaja gave in the latter years of his life. Somewhat less well-known are his substantial written contributions to the sampradaya. An accomplished Sanskritist, he composed the beautiful “Prema Dhama Deva Stotram,” a poetic seventy-two verse biography of Caitanya Mahaprabhu. Hearing Srila Sridhara Maharaja’s glorification of Bhaktivinoda Thakura in his “Srimad Bhaktivinoda-viraha-dasakam,” presented with such beauty and precision in an expression of genuine separation, Srila Bhaktisiddhanta commented that it was as if Bhaktivinoda himself had come in the person of Sridhara Maharaja and composed these verses. Later, his verses in glorification of Bhaktisiddhanta, “Sri Prabhupada Padma Stavaka,” came to be sung every day in every Gaudiya Matha center (a tradition that still continues), and Bhaktivedanta Swami Prabhupada expressed his desire for this practice to be taken up in his centers as well. Sridhara Maharaja composed a number of other deep Sanskrit prayers as well.

Other contributions include the compilation of Sri Prappana Jivanamrta, included within which are many original verses of his own composition. Characteristic of his deep reflections, Srila Sridhara Maharaja saw and extracted prema-bhakti and Srimati Radharani from within the pages of Srimad Bhagavad-gita and presented them in his translation and commentary. He also revealed a vision of the Gayatri mantra that takes it to the very heart of divinity. Both of these insights were unique and hugely significant literary additions to the Gaudiya sampradaya. These are but some of the offerings that have been made available to us by this recent luminary.

To simply list the many devotional accomplishments of Srila Bhakti Raksaka Sridhara Deva Goswami is in itself perhaps impossible, but more difficult is to put into words the comfort and hope one feels having a connection to such a harmonizing, generous, and well-wishing preceptor. It truly transcends words. As a grand-disciple, the affectionate prodding of Srila Sridhara Maharaja is palpable to me. His timeless and essential words push me to change but reassure me that he sees me for my potential. He is that affectionate grandfather who charms me into wanting the difficult and painful experience of spiritual growth. As he would say, Mahaprabhu judges not on the basis of one’s past, nor one’s present, nor even one’s future, but on their ideal, for that ideal will someday come to pass. I feel such generous vision coming from Srila Sridhara Maharaja. But his grace and that of the entire guru-parampara would seem to extend even one step further, judging us on an ideal that they themselves are in the process of establishing within us, ever-refining our conception of our own highest good.

I set out in this glorification to venerate Srila Sridhara Maharaja in his own regard, unhinged from the pressure to justify such veneration to those who do not possess it. But I find myself unable to fully escape my lamentation for those people, for Srila Sridhara Maharaja himself wanted only that Mahaprabhu, Saraswati Thakura, and Srila Prabhupada be fully honored and progressively represented by the rise of Gaudiya Vaishnavism world-wide. But I know that this wish cannot fructify without coming to terms with the truths that he so beautifully represented. This is not to say one can only achieve perfection through him—for he would certainly condemn such an exclusive statement—but rather that the principle of guru is singular, although appearing plural, and that principle is Krishna. What Vaishnava does not run eagerly to see Krishna wherever he makes himself available? Krishna has availed himself to us in a big way in the person and teachings of Srila Bhakti Raksaka Sridhara Deva Goswami. May we reciprocate accordingly.

13 Responses to In Praise of My Param Guru