Review: Christ and Krishna: Where the Jordan Meets the Ganges 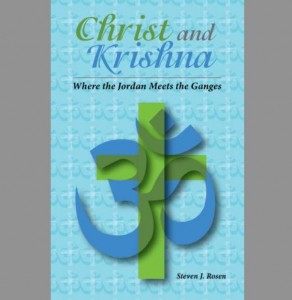 Steven Rosen, Christ and Krishna: Where the Jordan Meets the Ganges. Folk Books, 2011.

At the confluence of the Saraswati, Yamuna, and Ganges rivers at Prayaga, two aging men meet in great happiness. They grew up as friends in rural Bangladesh, but their paths eventually branched off in different directions. One become a Vaishnava Hindu sannyasi, Saragrahi Swami Maharaja (“Swami”), the other, a Jesuit Christian monk, Father Frances Yona, S.J. (“Frank”). They lost track of each other, but after a chance meeting in Jaipur some years ago, the two began corresponding intermittently. Now, the two have decided to take the time to meet again, to sit down and discuss their respective traditions.

Steven Rosen (Satyaraja Dasa) is no novice to interreligious dialogue. In 1989, he published a small book called Kṛṣṇa Consciousness and Christianity: East-West Dialogues, consisting of discussions between himself and Rev. Alvin Van Pelt Hart, Director of Clinical Pastoral Education, St. Luke’s Hospital. This book was followed in 1990 by similar discussions with the (reputedly fictional) Jewish Rabbi Jacob N. Shimmel (Om Shalom: Judaism and Krishna Consciousness). Rosen has also written on Buddhism from a Vaishnava perspective (From Nothingness to Personhood: a collection of essays on Buddhism from a Vaishnava-Hindu perspective), though dispensing with the dialogic form there.

Even though the cover design of the Christ and Krishna is somewhat trite, the small format and the graphic layout of the work is pleasant and attractive. The chapters are divided by clear subheadings into eminently readable portions. As this is a book for a wide circle of readers, Rosen has wisely chosen to dispense with diacritics (e.g., writing “Krishna” instead of “Kṛṣṇa”). The book has no notes or bibliography, but since the quotations given in the book are usually clearly referenced, the curious reader will have little difficulty in looking them up.

In this book Steven Rosen utilizes a fictional setting for the dialogue. Much as in Srila Bhaktivinoda’s Jaiva Dharma, the plot and the characters can be said to be rather rudimentary. Readers expecting to see character development or a distinct literary prose are apt to be disappointed: the framework of the dialogue is just that, a framework. In fact, the characters are not very believable. Rather than sounding like two Bengalis, they come across as Steven Rosen and Alvin Van Pelt Hart. Frank refers to European Christian theologians such as Geddes MacGregor and Hans Küng rather than to Indian Christians such as Sunder Singh or Raymond Panikkar. Steven Rosen can be said to follow the approach of Yogi Ramacharaka (William Walker Atkinson) and other early Western writers on Hinduism, whose Indian spiritual teachers rather ludicrously quote their Latin and Greek classics with ease ‒ but whom Western readers also could identify with, and therefore learn essential aspects of Indian thinking from. It is precisely in this bridging of East and West that Rosen has always been at his very best. If I had Christian friends or relatives that were opposed to my Vaishnava Hindu religion, this is just the book I would give them.

Interreligious dialogue is often held to have begun with the famous Chicago World Parliament of Religions in 1893, and is generally supposed to lead to mutual understanding rather than religious conversion. Reasons for engaging in such dialogue may nevertheless vary. Sometimes “dialogue” is a mere front for proselytizing. Scholars of interreligious dialogue call this “discursive dialogue”; Martin Buber may be less polite but more to the point when he calls it “monologue disguised as dialogue.” Engaging in interreligious dialogue is also a way for small, little-understood religious movements to get to play with the big boys, as it were, and gain both credibility as “real religions” and important social connections. Especially when faced with external threats (e.g., from the anti-cult movement), such movements often evince a new-found enthusiasm for dialogue.

In his introduction, Steven Rosen argues for a kind of philosophia perennis or essential spirituality found in all the major religions behind external appearances such as dogma and rituals. This essence, or soul of religion, to use Rosen’s term, is found in mysticism. However, in the book itself, it is only the two concluding chapters that deal with mysticism in the two religious traditions. Before that, Rosen sets the stage by having his protagonists discuss potentially divisive issues such as religious conversion, vegetarianism, reincarnation, and the identity of Jesus. The material here is not new. Bhaktipada’s widely distributed Christ and Kṛṣṇa: The Path of Pure Devotion from 1986 deals with many of the same issues. In fact, many of these chapters read as abridgements of Rosen’s earlier work on these topics, and some of Father Frances’ statements are taken over verbatim from Rev. Alvin Van Pelt Hart. But this should not be seen as a blemish: it would be foolish for Rosen not to repeat what his earlier work has taught him. Similar reuse of material can be seen in the works of many of his predecessors, such as Srila Jiva Goswami, who in his Krama-sandarbha simply reshuffles the contents of his Bhagavata-Sandarbha. What is more, as always, Rosen’s text is very enjoyable reading. I cannot think of any other text that would give as useful an overview of all of his work as this one does.

Now, while acknowledging the essential truth of all religions, Rosen maintains that the Vedic (understood in the modern, broad sense) literature, “objectively speaking,” represents the “unabridged dictionary” of the truth. This can be seen throughout the book, where it is generally the Swami who leads the discussion; Frank comes close to accepting even the transmigration of souls (though perhaps in the interest of fairness, Rosen does on the other hand have the Swami subscribe to the “fall from Vaikuntha”-theory—very similar to the Christian idea of falling from grace).

At any rate, this is certainly discursive dialogue—Rosen in no way hides his own Vaishnava affiliation, though compared to Kṛṣṇa Consciousness and Christianity, he is here much more of a listener, and his own tone is quite different—but it also makes sense. In order to point toward the harmony of the mystical aspects of Christianity and Vaishnava Hinduism, Rosen wishes to show how even the most divisive doctrinal differences of these two traditions may be reconciled. Scholars may point out weaknesses in specific arguments or examples (for me personally, particularly the arguments for Jesus’ visit to India seem weak, and the account of the description of Jesus in the Bhavisya Purana is glaringly inaccurate), but even in our present “post-secular” times, it is Christianity, not Vaishnavism, that holds the upper hand in situations of dialogue. There is therefore a clear need for books that reverse this situation, something that this book does already by its setting, locating the dialogue at a Hindu sacred place in India. When this reversal of power is furthermore done in such a respectful and thoughtful way as in this text, one is left with no other option than congratulating the author. Steven Rosen remains one of the most important voices of Western Vaishnavism.