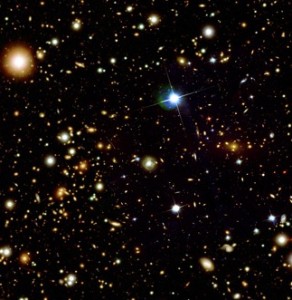 Krauss, Lawrence M. A Universe from Nothing: Why There Is Something Rather Than Nothing. Free Press, 2012

Lawrence M. Krauss, a well-known cosmologist and prolific popular-science writer, apparently means to announce to the world, in this new book, that the laws of quantum mechanics have in them the makings of a thoroughly scientific and adamantly secular explanation of why there is something rather than nothing. Period. Case closed. End of story. I kid you not. Look at the subtitle. Look at how Richard Dawkins sums it up in his afterword: “Even the last remaining trump card of the theologian, ‘Why is there something rather than nothing?,’ shrivels up before your eyes as you read these pages. If ‘On the Origin of Species’ was biology’s deadliest blow to super­naturalism, we may come to see ‘A Universe From Nothing’ as the equivalent from cosmology. The title means exactly what it says. And what it says is ­devastating.”

Where, for starters, are the laws of quantum mechanics themselves supposed to have come from? Krauss is more or less upfront, as it turns out, about not having a clue about that. He acknowledges (albeit in a parenthesis, and just a few pages before the end of the book) that every­thing he has been talking about simply takes the basic principles of quantum mechanics for granted. “I have no idea if this notion can be usefully dispensed with,” he writes, “or at least I don’t know of any productive work in this regard.” And what if he did know of some productive work in that regard? What if he were in a position to announce, for instance, that the truth of the quantum-mechanical laws can be traced back to the fact that the world has some other, deeper property X? Wouldn’t we still be in a position to ask why X rather than Y? And is there a last such question? Is there some point at which the possibility of asking any further such questions somehow definitively comes to an end? How would that work? What would that be like?

The fundamental physical laws that Krauss is talking about in “A Universe From Nothing” – the laws of relativistic quantum field theories – are no exception to this. The particular, eternally persisting, elementary physical stuff of the world, according to the standard presentations of relativistic quantum field theories, consists (unsurprisingly) of relativistic quantum fields. And the fundamental laws of this theory take the form of rules concerning which arrangements of those fields are physically possible and which aren’t, and rules connecting the arrangements of those fields at later times to their arrangements at earlier times, and so on – and they have nothing whatsoever to say on the subject of where those fields came from, or of why the world should have consisted of the particular kinds of fields it does, or of why it should have consisted of fields at all, or of why there should have been a world in the first place. Period. Case closed. End of story.

Krauss, mind you, has heard this kind of talk before, and it makes him crazy. A century ago, it seems to him, nobody would have made so much as a peep about referring to a stretch of space without any material particles in it as “nothing.” And now that he and his colleagues think they have a way of showing how everything there is could imaginably have emerged from a stretch of space like that, the nut cases are moving the goal posts. He complains that “some philosophers and many theologians define and redefine ‘nothing’ as not being any of the versions of nothing that scientists currently describe,” and that “now, I am told by religious critics that I cannot refer to empty space as ‘nothing,’ but rather as a ‘quantum vacuum,’ to distinguish it from the philosopher’s or theologian’s idealized ‘nothing,’ ” and he does a good deal of railing about “the intellectual bankruptcy of much of theology and some of modern philosophy.” But all there is to say about this, as far as I can see, is that Krauss is dead wrong and his religious and philosophical critics are absolutely right. Who cares what we would or would not have made a peep about a hundred years ago? We were wrong a hundred years ago. We know more now. And if what we formerly took for nothing turns out, on closer examination, to have the makings of protons and neutrons and tables and chairs and planets and solar systems and galaxies and universes in it, then it wasn’t nothing, and it couldn’t have been nothing, in the first place. And the history of science – if we understand it correctly – gives us no hint of how it might be possible to imagine otherwise.

And I guess it ought to be mentioned, quite apart from the question of whether anything Krauss says turns out to be true or false, that the whole business of approaching the struggle with religion as if it were a card game, or a horse race, or some kind of battle of wits, just feels all wrong – or it does, at any rate, to me. When I was growing up, where I was growing up, there was a critique of religion according to which religion was cruel, and a lie, and a mechanism of enslavement, and something full of loathing and contempt for every­thing essentially human. Maybe that was true and maybe it wasn’t, but it had to do with important things – it had to do, that is, with history, and with suffering, and with the hope of a better world – and it seems like a pity, and more than a pity, and worse than a pity, with all that in the back of one’s head, to think that all that gets offered to us now, by guys like these, in books like this, is the pale, small, silly, nerdy accusation that religion is, I don’t know, dumb.

David Albert is a professor of philosophy at Columbia and the author of Quantum Mechanics and Experience.

One Response to Review: A Universe from Nothing