Does Quantum Physics Make it Easier to Believe in God? 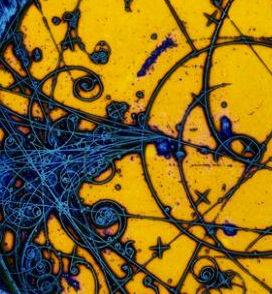 Not in any direct way. That is, it doesn’t provide an argument for the existence of God.  But it does so indirectly, by providing an argument against the philosophy called materialism (or “physicalism”), which is the main intellectual opponent of belief in God in today’s world.

Materialism is an atheistic philosophy that says that all of reality is reducible to matter and its interactions. It has gained ground because many people think that it’s supported by science. They think that physics has shown the material world to be a closed system of cause and effect, sealed off from the influence of any non-physical realities — if any there be. Since our minds and thoughts obviously do affect the physical world, it would follow that they are themselves merely physical phenomena. No room for a spiritual soul or free will: for materialists we are just “machines made of meat.”

Quantum mechanics, however, throws a monkey wrench into this simple mechanical view of things.  No less a figure than Eugene Wigner, a Nobel Prize winner in physics, claimed that materialism — at least with regard to the human mind — is not “logically consistent with present quantum mechanics.” And on the basis of quantum mechanics, Sir Rudolf Peierls, another great 20th-century physicist, said, “the premise that you can describe in terms of physics the whole function of a human being … including [his] knowledge, and [his] consciousness, is untenable. There is still something missing.”

How, one might ask, can quantum mechanics have anything to say about the human mind?  Isn’t it about things that can be physically measured, such as particles and forces?  It is; but while minds cannot be measured, it is ultimately minds that do the measuring. And that, as we shall see, is a fact that cannot be ignored in trying to make sense of quantum mechanics.  If one claims that it is possible (in principle) to give a complete physical description of what goes on during a measurement — including the mind of the person who is doing the measuring — one is led into severe difficulties. This was pointed out in the 1930s by the great mathematician John von Neumann.  Though I cannot go into technicalities in an essay such as this, I will try to sketch the argument.

A familiar example of this is the idea of “half-life.”  Radioactive nuclei are liable to “decay” into smaller nuclei and other particles.  If a certain type of nucleus has a half-life of, say, an hour, it means that a nucleus of that type has a 50% chance of decaying within 1 hour, a 75% chance within two hours, and so on. The quantum mechanical equations do not (and cannot) tell you when a particular nucleus will decay, only the probability of it doing so as a function of time. This is not something peculiar to nuclei. The principles of quantum mechanics apply to all physical systems, and those principles are inherently and inescapably probabilistic.

This is where the problem begins. It is a paradoxical (but entirely logical) fact that a probability only makes sense if it is the probability of something definite. For example, to say that Jane has a 70% chance of passing the French exam only means something if at some point she takes the exam and gets a definite grade.  At that point, the probability of her passing no longer remains 70%, but suddenly jumps to 100% (if she passes) or 0% (if she fails). In other words, probabilities of events that lie in between 0 and 100% must at some point jump to 0 or 100% or else they meant nothing in the first place.

This raises a thorny issue for quantum mechanics. The master equation that governs how wavefunctions change with time (the “Schrödinger equation”) does not yield probabilities that suddenly jump to 0 or 100%, but rather ones that vary smoothly and that generally remain greater than 0 and less than 100%.  Radioactive nuclei are a good example. The Schrödinger equation says that the “survival probability” of a nucleus (i.e. the probability of its not having decayed) starts off at 100%, and then falls continuously, reaching 50% after one half-life, 25% after two half-lives, and so on — but never reaching zero. In other words, the Schrödinger equation only gives probabilities of decaying, never an actual decay! (If there were an actual decay, the survival probability should jump to 0 at that point.)

Related QuestionsWelcome to Big Questions OnlineWhat Is It to be Intellectually Humble?

So how do minds enter the picture?  The traditional understanding is that the “definite events” whose probabilities one calculates in quantum mechanics are the outcomes of “measurements” or “observations” (the words are used interchangeably).  If someone (traditionally called “the observer”) checks to see if, say, a nucleus has decayed (perhaps using a Geiger counter), he or she must get a definite answer: yes or no.  Obviously, at that point the probability of the nucleus having decayed (or survived) should jump to 0 or 100%, because the observer then knows the result with certainty.  This is just common sense. The probabilities assigned to events refer to someone’s state of knowledge: before I know the outcome of Jane’s exam I can only say that she has a 70% chance of passing; whereas after I know I must say either 0 or 100%.

Thus, the traditional view is that the probabilities in quantum mechanics — and hence the “wavefunction” that encodes them — refer to the state of knowledge of some “observer”.  (In the words of the famous physicist Sir James Jeans, wavefunctions are “knowledge waves.”)  An observer’s knowledge — and hence the wavefunction that encodes it — makes a discontinuous jump when he/she comes to know the outcome of a measurement (the famous “quantum jump”, traditionally called the “collapse of the wave function”). But the Schrödinger equations that describe any physical process do not give such jumps!  So something must be involved when knowledge changes besides physical processes.

An obvious question is why one needs to talk about knowledge and minds at all. Couldn’t an inanimate physical device (say, a Geiger counter) carry out a “measurement”?  That would run into the very problem pointed out by von Neumann: If the “observer” were just a purely physical entity, such as a Geiger counter, one could in principle write down a bigger wavefunction that described not only the thing being measured but also the observer. And, when calculated with the Schrödinger equation, that bigger wave function would not jump! Again: as long as only purely physical entities are involved, they are governed by an equation that says that the probabilities don’t jump.

That’s why, when Peierls was asked whether a machine could be an “observer,” he said no, explaining that “the quantum mechanical description is in terms of knowledge, and knowledge requires somebody who knows.” Not a purely physical thing, but a mind.

But what if one refuses to accept this conclusion, and maintains that only physical entities exist and that all observers and their minds are entirely describable by the equations of physics? Then the quantum probabilities remain in limbo, not 0 and 100% (in general) but hovering somewhere in between. They never get resolved into unique and definite outcomes, but somehow all possibilities remain always in play. One would thus be forced into what is called the “Many Worlds Interpretation” (MWI) of quantum mechanics.

In MWI, reality is divided into many branches corresponding to all the possible outcomes of all physical situations. If a probability was 70% before a measurement, it doesn’t jump to 0 or 100%; it stays 70% after the measurement, because in 70% of the branches there’s one result and in 30% there’s the other result! For example, in some branches of reality a particular nucleus has decayed — and “you” observe that it has, while in other branches it has not decayed — and “you” observe that it has not. (There are versions of “you” in every branch.) In the Many Worlds picture, you exist in a virtually infinite number of versions: in some branches of reality you are reading this article, in others you are asleep in bed, in others you have never been born. Even proponents of the Many Worlds idea admit that it sounds crazy and strains credulity.

If, on the other hand, we accept the more traditional understanding of quantum mechanics that goes back to von Neumann, one is led by its logic (as Wigner and Peierls were) to the conclusion that not everything is just matter in motion, and that in particular there is something about the human mind that transcends matter and its laws.  It then becomes possible to take seriously certain questions that materialism had ruled out of court: If the human mind transcends matter to some extent, could there not exist minds that transcend the physical universe altogether? And might there not even exist an ultimate Mind?

2 Responses to Does Quantum Physics Make it Easier to Believe in God?