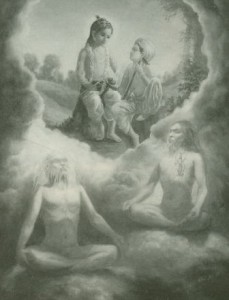 Brahman, Paramatma, and Bhagavan are well known Vedantic terms referring to the Absolute—terms that are often considered synonymous. However, while Gaudiya Vaishnavas agree that Brahman, Paramatma, and Bhagavan are different names for the Absolute, they emphasize that the three are, at the same time, not synonymous. They are God’s effulgence, his manifestation as the oversoul of the world, and his form for lila in the world beyond, respectively. The Gaudiyas further contend that the former two manifestations arise from the latter.

Analyzing in this way, these three manifestations of divinity would seem to be three distinct, objective realities. However, they also constitute subjective experiences of the Absolute relative to different approaches to the Godhead. But first let us look at them as objective realities—as eternal aspects of the Absolute: aspects of existence (sat), knowledge (cit), and love (ananda), corresponding to Brahman, Paramatma, and Bhagavan.

Still one may question further, “Do not both jnana and yoga ultimately seek all three aspects of the Absolute—existence, knowledge, and love, as well? “Yes and no,” the bhakta will reply. In order to understand this reply, let us look carefully at these three ideals and their corresponding paths.

The jnana marga, the path of knowledge, is four-fold in practice. It entails transrational introspection (viveka); detachment (vairagya); the cultivation of six virtues—1) tranquility (sama), 2) rational control of the senses (dama), 3) satiety (uparati), 4) tolerance (titiksa), 5) faith in revelation (sraddha), and 6) mental concentration (samadhana)—that together are taken as one practice (sad-sampat); and lastly, a longing for liberation (mumuksatva).

In the jnana marga, the practitioner seeks complete unity with the Absolute, as all difference is thought to arise from ignorance born from attachment. The identity that arises from attachment to objects and experiences that do not endure is not a lasting one, and infinitely more important than such objects and experiences is the experiencer itself: consciousness. While in the ephemeral world things are “here today and gone tomorrow,” that which experiences them—consciousness—endures eternally. In the jnana marga, consciousness is understood to be primal and irreducible, in part because the very attempt to reduce the conscious entity to matter requires consciousness. In other words, the very act of making the claim that consciousness is reducible refutes its premise. One can no more deny the foundational role and irreducible nature of consciousness than one can rationally say, “I am dead.” One can say that consciousness is not this and not that material object or force—neti neti—but this does not make consciousness any less meaningfully. The fact that consciousness is not comparable to anything of the physical or natural world leads logically to the conclusion that it is non-physical or super natural.

Realizing the temporal nature of the world and its false variety in contrast to the eternal nature of consciousness and its likeness to the underlying, unified consciousness of Brahman, the jnani seeks to realize an eternal existence devoid of the illusion that gives rise to attachment. Thus eternal existence is the jnani’s ideal. His or her knowledge is primarily knowledge of the ephemeral nature of the world and the disappointment that lies in attachment to it. The jnani’s knowledge thus fosters detachment, which in turn serves his or her pursuit of eternal existence, upon attaining which, knowledge itself, the individual knower, and the object of knowledge are thought to merge in oneness of “absolute being.”

The love of the jnani constitutes merely forgoing worldly exploitation—karmic acquisition—and the corresponding relief derived from the absence of karmic repercussions. To the extent that loving is about giving, we find love in the jnani’s ceasing from taking, but there is no sense of lasting reciprocal love in the jnani’s ideal. Thus for the jnani, both knowledge and love are centered on existence. Indeed, Brahman is pure existence without dualities and thus without any Other to know or to love. The jnani is satisfied to know that he or she exists.

Yoga sadhana, on the other hand, consists of an eightfold practice. It begins with the embrace of that which is favorable to yoga (yama) and a rejection of that which is not (niyama). This is followed by sitting (asana), breath control (pranayama), withdrawal of the senses from sense objects (pratyahara), concentration (dharana), meditation (dhyana), and yogic trance of omniscience (samadhi). Yoga is a very sophisticated methodology for gaining control over one’s entire physical body, both the outer limbs as well as the internal organs and their functions—from posture and agility to control of one’s digestion, evacuation, sexual energy, etc. It also achieves control over the subtle, psychic dimension of one’s material experience, giving rise to psychic powers. Such comprehensive control and subsequent powers imply attainment of knowledge, knowledge like that of the all-knowing Isvara or Paramatma.

Paramatma is the aspect of the absolute that oversees and permeates this world and therefore, as opposed to extreme forms of the jnana marga in which the world is dismissed altogether, in yoga, an acute awareness of the world is attained through meditation on the Paramatma in the course of attaining perfection. There is no more effective means to attain yoga samadhi than isvara pranidhana, submission to and prayerful meditation on the Paramatma.

The yogi never becomes the Paramatma, but the knowledge of the Isvara becomes the yogi’s knowledge as well. Unlike the jnana marga, in yoga there is eternal existence and also someone else to know, to contemplate—Paramatma. From the absolute unity of Brahman, the yogic perception of Paramatma involves a subtle differentiation of the divine, culminating in a beatific vision in eternal passive adoration. Thus the perfected yogi exists eternally like the jnani, but also knows something more than mere existence. The yogi knows of an Other and also loves in a passive yet positive sense, as opposed to merely knowing of the One and loving only in the abstract sense of ceasing exploitation, as in the case of the jnani. This passive love of the yogitakes two forms: passive adoration of and identification with the Paramatma and a compassion for others resulting from understanding their sorrows as the omnipresent Paramatma does.23 Thus the existence and love of the yogi are centered on knowledge. Yogi Sri Krishna-namacarya calls this attainment Vaikuntha, ((From the Guadiya perspective, the successful yogi attains santa rasa. Such an ideal typically leaves one uninterested in Bhagavan’s lila, but rather his Paramatma feature as manifest in Vaikuntha.)) an ideal that is distinctly theistic in comparison to the monistic ideal of the jnani.4

From the existence of the jnani and the knowledge of the yogi we come to the love of the bhakta. While bhakti is a yoga in one sense, Yogesvara Sri Krishna, the master of yoga, also distinguishes the two. Concluding his teaching on mystic yoga in the sixth chapter of the Bhagavad-gita, Sri Krishna encourages us to become yogis, for it is better, he says, to be a yogi than it is to be a jnani.5 Here he indicates that a knowing existence (knowing of a spiritual Other) is more transcendentally perfect than merely existing and knowing what is ignorance. However, Krishna, goes on to say that better than the yogi is the devotee.6 In other words, Krishna advocates the life of transcendental love, within which existence and knowledge are present and even culminate, although the devotee experiences them as incidental to loving.

Reasoning that Bhagavan, on account of his loving nature and capacity, is the primal aspect of the Absolute, Gaudiya Vaishnavas reason further that Krishna is the primal form of Bhagavan, being that face of Bhagavan with whom the fullest range of loving relationships take place.7 The practice of Krishna bhakti as taught by the Gaudiyas’ central text, Srimad Bhagavatam, is primarily focused on three expressions of love: sravanam (hearing), kirtanam (chanting/singing), and smaranam (meditating). Hearing about the object of one’s love fosters singing about it, and this singing in turn fosters deep meditation upon it.

Devotees hear and recite about Krishna in the form of the philosophical and theological teachings that underlie the Godhead’s eternal existence, which includes realization of Brahman and Paramatma. Devotees also hear about and glorify the names, forms, qualities, and various lilas of Sri Krishna that constitute the love life of the Absolute, its movement in ecstatic celebration of its fullness. Gradually the bhakta becomes absorbed in deep and continuous meditation upon these lilas such that a meditative body arises out of identification with a primary loving sentiment for Krishna exemplified within the lila, enabling the devotee to enter the circle of the Godhead’s own love life in this meditative spiritual form and spiritual identity.

The bhakta is uninterested in eternal existence in the sense of emancipation experienced by the jnani. He or she cares not for liberation from the confines of material existence because loving Krishna has such power to attract him that he himself comes within the world as various avataras and devotees within whom divine love resides.

Similarly, just as the devotee does not approach Krishna for eternal existence, neither does he or she approach Krishna for knowledge of his Godhood, controlling power, or omniscience. Indeed, the devotees seek loving union in intimacy with Krishna that is only possible when his Godhood is suppressed. Such is the divine ignorance of Krishna bhakti in prema, divine love. Prema makes the omnipotent, the infinite, appear finite for the sake of intimacy. The devotee wants neither eternal existence nor transcendental knowledge in and of themselves, but rather he or she experiences these two incidentally as a byproduct of bhakti. The devotee desires only love of Bhagavan Sri Krishna, in whom the transcendent being of Brahman and the immanent, all-knowing influence of the Paramatma are integrated and relegated to supporting roles in Bhagavan’s life of love. In love, knowing and existing take on their greatest meaning. While the jnani loves to exist and the yogi loves to know and exist, the bhakta exists and knows only to love.

The inner circle of Sri Krishna’s lila is so love laden that Krishna himself loses sight of his Godhood and the world (knowledge), and in the face of Bhakti-devi’s love for him, personified as Radha, he undergoes an existential crisis, questioning his position as Rasaraja, the king of love. Love, in other words, subordinates not only existence and knowledge in the life of the bhakta, but in the case of Krishna it subordinates the existence and knowledge of God himself.

Brahman, Paramatma, and Bhagavan are one nondual Absolute known variously by the distinct paths of jnana, yoga, and bhakti. Steam, ice, and water are one substance, but water is at the same time that from which steam and ice are derived. Similarly, Bhagavan is the full face of the nondual reality, while Paramatma and Brahman are derivative. Furthermore, it is the Guadiya Vaisnavas’ conclusion that if the loving aspect of the Absolute is the primal aspect, then Sri Krishna, with whom the full range of transcendental love can be experienced, is the fountainhead of all manifestations of Bhagavan. It is he and his devotees who exist only to love and do so independently of any knowledge of Krishna’s Godhood.

The above article is scheduled to appear in the next edition of Namarupa magazine.