The Art of Living in Modern India 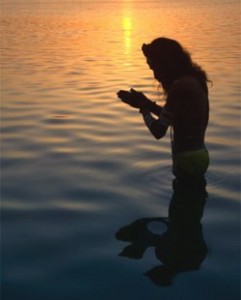 When I think of India, the same bizarre sound always resonates in my head. It is not the sound of muezzin, or Bollywood soundtracks, or auto-rickshaw drivers cursing at plodding elephants, though there was plenty of that. No. It’s the sound of a lone man sawing a piece of wood. Actually, it’s stranger than that. It’s the sound of a boom box playing a tape recording of a man sawing wood.

Let me explain. I have lived in India twice. The first time was in 2002. I was there with my girlfriend, Kasia, who was visiting as a medical student. During our stay, we followed the recommendation of a neighbor and took a month-long course offered by the Art of Living Foundation, which is run by a mega-guru named Ravi Shankar (not to be confused with the musician of the same name). I’d never pegged myself as the sort who would benefit from meditation or “spiritual enlightenment,” but I went anyway. Every class, we worked on our breathing – in and then out, in and then out, in and then out – until our minds went blank in a cascade of bliss.

Except for my mind.

It just didn’t work for me.

Then one day, our teacher brought in her boom box and played a tape recording of a man sawing wood. She asked us to breathe in sync with his rhythm. Don’t ask me why, but this worked. My thoughts dissolved, time slowed down, and I felt good – really good. In another exercise, we paired off with other students. For roughly fifteen minutes, we sat cross-legged, facing one another, holding hands, and staring into each other’s eyes. I was paired with a pudgy-faced medical school student. We sat so close that I could see the tiny beads of perspiration on his upper lip. As you can imagine, initially, the whole episode was quite awkward. But at some point in the process, I relaxed and felt a fleeting sense of connectedness to this stranger. When the fifteen minutes were up, many people were crying.

When we tried to describe our experiences to friends and family, we sounded, well…weird. My mother-in-law, for example, is a neuroscientist from Poland who sorts every iota of information in the world into two categories: (1) scientifically-proven truths and (2) bullshit. “Sounds like bullshit – you know, a cult,” she told us, in her blunt though loveable way. “Those feelings that you felt – they don’t last.”

She was right. They didn’t.

But maybe more than anything else, it was this memory that lured me back to India ten years later. I wanted to find my way back into that moment and that state of mind. And no, in case you are wondering, I couldn’t seem to find that feeling back at home.  I tried to meditate, I tried to do my asanas, but somehow the magic was gone; I felt like an imposter going through the motions, vainly trying to will myself into a state of mind that seemed as fleeting as time itself.  I became convinced that I had to go back.  By then, Kasia and I had gotten married and we had two little kids. It seemed whimsical, even half-mad, to move back to India, family in tow, because I recalled breathing better there – especially given the fact that the air in India was quite often a perpetual fog of car exhaust and smoke from rubbish fires. And, of course, there were other reasons for our move. But I’d be lying if I told you that the breathing wasn’t a part of it.  I was tired of the workaday routine of my life in Connecticut – going to Costco, working out at the gym, passing out at night watching “The Wire” on my iPad.  I was tired of picking up my little kids at daycare at precisely 5 PM, checking an excel spreadsheet to see how many bowel movements they made per hour, and then putting down my initials, my approval, as if to say: yes, marvelous, all is well, all is how it should be.  I was tired of living a sensible, orderly life governed by rational decisions. I wanted to be back in India, where the priests beat the gongs in the temples with relentless fury, as if to say: wake up you comatose fool, be here, right now, before your life passes you by.  Looking back, it seems like a romantic and somewhat clichéd notion.  But at the time, I assure you, I was very earnestly itching to get the hell out of dodge and get a bit more spiritual as well.

Read the entire article on The Revealer.

3 Responses to The Art of Living in Modern India