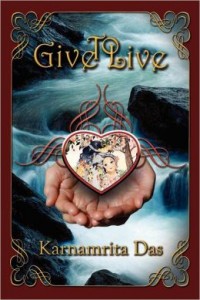 Karnamrita Das (Christopher John Cox) is a long-time practitioner of bhakti-yoga. Initiated to the Gaudiya Vaishnava tradition by the founder of the International Society for Krishna Consciousness (Iskcon), A.C.Bhaktivedanta Swami, he has experienced first-hand both the idealistic phase of a young spiritual movement, its growing pains, and its development into a more mature society. This development overlaps with his personal bhakti–yoga career. Through his writing we get glimpses into the inner world of a dedicated spiritualist, whose trials and experiences have resulted in a balanced and mature understanding of everyday spirituality. The dominant impression is that of a life-long spiritual adventure; fortunately for the reader, Karnamrita’s adventure has yielded realizations that he is now offering to share with others.

Too often, on any yoga path, we either have the total beginners guides, á-la Feng Shui for Dummies, or the classic sacred texts, which have stood the test of time, yet may be hard to penetrate (try reading any classic commentary on the Yoga-sutra or Upanishads to see what I mean). Karnamrita’s book falls in between these extremes. Unlike its stated purpose, “…this book is primarily for those new to bhakti…” (p. xv), it is not new-comers stuff. We are told openly about the challenges we are about to meet if we persevere on the spiritual path.

Despite the fact that the book has plenty of quotes from the classic bhakti texts, it is not heavy reading. Karnamrita never uses the quotes to place himself on a pedestal, nor to hit the reader on the head with the Truth. Throughout the book he is with the reader, explaining his personal realizations about the particular ideals he has found relevant on his journey. And quite often, he speaks to us not as a teacher, but rather as a friend, who wishes to share something wonderful he has found. We may even recognize: “Oh, I have experienced something similar. How wonderful to hear how he has gone through the same tribulations that I am currently struggling with!” And after all his struggles, Karnamrita is still there, continuing on his path, making further progress and full of optimism.

Despite the format of the book—it is a collection of seemingly unrelated blog-entries he has written over some years—the overall reading experience is not one of jumping around. On a deeper level, the feeling behind his various ideas remains the same: encouraging, compassionate, wise, and introspective. This is true even when he chooses to discuss topics like politics. When he does, I notice myself wanting to disagree with him, and I believe he wouldn’t mind! When he suggests that the world needs more spiritually enlightened leaders, I find myself thinking, “Haven’t we sufficiently seen the corrupting influence of power, both in mundane and religious contexts? How about focusing on our own backyard?” Yet during moments like that, I feel like I am engaging in a conversation rather than protesting against an opposite view. Reading the book I notice becoming fascinated by the thought of sharing ideas and perspectives with the author. To me, this is not only a sign of talented writing, but of a friendly attitude that is carried across by his words.

In this friendly, conversational spirit, I would like to offer some remarks that may serve as points of consideration to future writing projects, especially those that end up as books. First of all, I heartily welcome the author’s stated intention to write another book completely dedicated to people who don’t know anything about bhakti-yoga or Gaudiya Vaishnavism. There are moments in this book, where he writes in such a mood, but then on the next page, the message is clearly directed to people who are already experienced and familiar with much of the tradition and practices he represents. A sharper focus on a single target-audience would improve the effect of the text. Another point is about editing. I can understand that collecting blog texts into a book can reach a new audience, and I am personally grateful for this effort, as I wouldn’t have read this on the web. So I am not complaining, but just stating a wish: professional editing would have been a worthwhile investment to make the book more user-friendly.

These remarks notwithstanding, I found the book to be a diamond—and not an uncut one—and the fact that it could be further polished does not in any way diminish its value. I hope that sincere spiritual seekers will find this book. I do believe that despite speaking from the perspective of an insider in a particular spiritual tradition—bhakti-yoga as presented by Iskcon—Karnamrita’s writing will have much to offer to seekers on other paths as well. And if I am right on this, then Karnamrita is after all also partly right when he states that he intends to write to those new to bhakti. But I do think one needs to have some experience on some spiritual path in order to be able to appreciate the depth of Karnamrita’s ideas.

Give to live can be purchased here, while Karnamrita’s blog can be found here.

2 Responses to Review: Give to Live