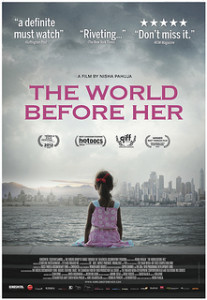 Film Review: The World Before Her (2013).  Directed by Nisha Pahuja

In 2009, Miss USA contestant Carrie Prejean underwent an extreme makeover at the hands of the 24-hour news cycle. The 5’10” Southern California blonde made a sharp pivot from the pageant stage to the front lines of the culture wars after responding to a question about same-sex marriage in a way that was neither beautiful nor brainy. Prejean failed to win the contest, and conservative pundits put forward Prejean as a picturesque victim of liberal media bias gone wild. With the exception of the Prejean controversy, beauty pageants in the United States and Europe have become increasingly marginal affairs, perhaps falling somewhere between infomercials for kitchen gadgets and swamp-themed reality programs in terms of cultural consequence.

Two years after Prejean made headlines in the USA, an estimated one billion viewers tuned in to watch twenty young women compete for the Miss India crown.

Nisha Pahuja’s The World Before Her invites us into India’s burgeoning pageant scene, as experienced by 19-year-old contestant Ruhi Singh. In the film’s opening sequence, Ruhi walks down a bustling Jaipur street, baring her shoulders and legs in a way that modestly integrates fashion and civil disobedience. Ruhi fixes her eyes on the road ahead, unperturbed by the male gazes fixated on her. Ruhi is the unabashed new India, and a top placing in the Miss India pageant is her gateway to social and economic ascendancy.  Her personal revolution hinges on the right combination of genetics and cosmetics – and thirty days of pageant training with coaches vaguely reminiscent of Cruella de Vil and Austin Powers.

Six-hundred miles away from Jaipur, a young woman named Prachi Trivedi trains for martial combat, warding off an invisible opponent with a wooden lathi.  As a junior member of the Hindu nationalist group Vishva Hindu Parishad (VHP), Prachi expresses herself with a confidence not unlike Ruhi’s. In Prachi’s view, India is succumbing rapidly and tragically to westernization.  A “spiritual and physical awakening” is required in order to defend Hindu culture, and Prachi is ready to fight for “Bharata Mata.” Senior teachers at the VHP’s camp for girls, where Prachi volunteers, rail against the corrupting influence of beauty pageants, Bollywood, and foreign companies.

Western admirers or practitioners of Hinduism for whom skin-deep consumer capitalism has lost some of its allure may to some degree sympathize with Prachi’s ardent, though strongly binary view of the choice between tradition and modernity facing present-day India.  Outsiders’ sentiment that India would be better off without certain markers of westernization is not unusual – and perhaps not unwarranted.

Like the caustic whitening creams that adulterate Ruhi’s complexion as she prepares for the stage, however, Prachi’s pro-Hindu rhetoric is mostly propagandist gloss imbibed from group leaders.  The VHP’s religious conception favors form and cultural specificity in ways that make Hinduism look as if its best days are neither behind nor ahead.  In her traditional household, Prachi is subject to corporeal punishment. A domineering father rejects the notion that Prachi might pursue a career in lieu of family life. Scenes from the VHP’s training camp show Prachi and other girls chanting militant slogans and learning to use firearms.

Back in Mumbai at the Miss India training center, Ruhi and her cohort of Miss India aspirants pose in one fleshy photoshoot after another. Camera-wielding men arrange and re-arrange the girls like a set of factory-produced dolls. Makeup and admonishing posing tips flow freely. Megawatt smiles cannot disguise emerging jealousy, as only one entrant will take the crown.  As the contest approaches, Ruhi’s emotional armor begins to crack. She reveals a fragility hidden previously by catwalk posturing and pouty lips. Here Ruhi’s girlhood rather than womanhood is in evidence. We worry not about her contest placing, but rather about the uncertain prospects for girls in a society that basks in the glow of female beauty on television screens, while vastly favoring male progeny. The film cites staggering rates of selective abortions and suspected female infanticide. Recent acts of sexual assault in India also come to mind.

The tension between tradition and modernity is not new. Indeed, stories of defiant “love marriages” have been Bollywood staples for decades. The World Before Her reveals two polarities of a cultural conflict driven not so much by Prachi and Ruhi, but by an older generation of Indians represented by a narrow-minded father and a rather villainous diction coach. They cannot conceive of a cultural synthesis that might retain essential spiritual principles while adopting aspects of western liberality.  We see Hindu men taking to the streets in vehement protest of beauty pageants. We hear the diction coach’s pompous dismissal of huge swathes of Indian society. Perhaps it would be best for these extreme cultural forces to get out of the way.

The film is a pleasant departure from contemporary documentaries about India such as Born into Brothels, which brims with the filmmaker’s personal ideology. As a director, Pahuja lets Ruhi and Prachi speak for themselves. Her off-camera questioning is simple, yet Pahuja elicits profound responses from both girls and cuts the dialog in ways that adds poignancy to her subjects’ statements. Intimate camerawork and candor reveal surprising similarities behind Ruhi’s and Prachi’s veneer of irreconcilable differences. They navigate complex social forces with urgency reflective of the impending prospect of marriage – and the likely end of their present idealism.

India has one of the world’s youngest populations. The country is also in the midst of a vast trend towards urbanization. Although Ruhi and Prachi do not meet in the context of the film, in the coming years millions of young women much like them will converge in India’s cities and universities.  As inheritors of a rich past and connoisseurs of the present, their generation will have to determine if the cultural valences explored in the film can be harmonized in ways that preserve the best of tradition, and sensibly accommodate the best of the new.

Until February 1, 2014, The World Before Her may be viewed online here: http://www.pbs.org/pov/worldbeforeher/

3 Responses to Film Review: The World Before Her