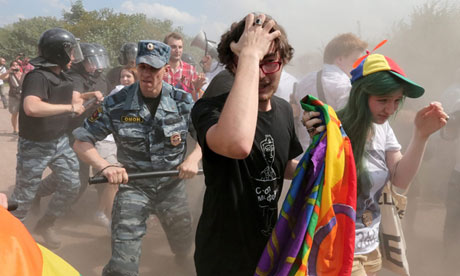 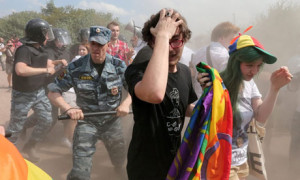 A new law in Russia forbids any positive support of gay people or gay rights in public. Such support is punishable by jail sentences and fines. It remains perfectly legal, however, to openly condemn gay people. The law has sparked global outrage in the developed world and incited many human rights abuses within Russia itself.

People educated in Vedic knowledge will understand the folly of such an uncivilized law, which rests on the erroneous idea that homosexual orientation (same-sex attraction) is somehow “contracted” during childhood, just as people acquire various vices after initial exposure early in life. Vedic medical texts such as the Sushruta Samhita, however, classify same-sex attraction and behavior as inborn (sahaja), not as an acquired vice (see Sushruta Samhita 3.2.38-45). The Narada-smriti and Sanskrit medical texts further elaborate that homosexual attraction is not something that can be changed or “cured.” Furthermore, the Kama Shastra states that “the romantic desire of third-gender men (tritiya-prakriti) to engage in various types of sexual practices with other men arises from deep within the imagination and without prior experience.” (Kama Sutra 2.1.39-42).

Isolating a child who is gay by nature will not in any way “prevent” him or her from developing same-sex attraction. This is confirmed not only by Vedic texts, but also by modern science and practical experience. According to the American Psychological Association: “Educating all people about sexual orientation and homosexuality is likely to diminish anti-gay prejudice. Accurate information about homosexuality is especially important to young people who are first discovering and seeking to understand their sexuality—whether homosexual, bisexual or heterosexual. Fears that access to such information will make more people gay have no validity—information about homosexuality does not make someone gay or straight.”

Innumerable accounts from gay men and lesbians attest to the fact that same-sex attraction emerges in early adolescence, well before any sexual experience or exposure to homosexuality. In my personal experience, I grew up in the 1960s when there was very little if any mention of homosexuality, gay role models, or any gay rights movements in the public sphere. I had no exposure to homosexuality in my childhood yet exclusive same-sex attraction became distinctly manifest at puberty.

Vedic society understood all of these things very scientifically and thus did not harbor any unnecessary fears about gay people. Rather, it treated them with kindness and respect. The prime example of this is Mahraja Virata’s magnanimous treatment of the cross-dressing transgender Brihannala (Arjuna). Furthermore, the Manu Samhita and Artha Shastra declare it a crime to vilify anyone of the third gender, and require that such a person’s minimum needs be met by society (see Arthasastra 3.18.4-7 and 3.5.30-32). In Vedic culture these five are protected: women, the cow, children, the elderly and the third sex. In regard to the third gender, this class was protected because they typically had no children of their own, were viewed as gentle by nature, and were considered guardians of the cultural arts and sciences.

If people and countries cannot understand the science behind natural variations such as homosexual orientation and transgender identity, they should at least approach the issue from the platform of kindness and human decency. This is supposed to be an important part of any religion, including that of the Russian Orthodox Church. Sadly, Russia’s new law does nothing other than destroy social liberties, encourage ignorance, and incite violence against gays. Rather than protecting Russian youth and society as a whole, it factually harms both by preventing any development of understanding and appreciation for diversity, and by discouraging social tolerance. For Gaudiya Vaishnavas there is furthermore the looming danger that when one minority group is attacked, others will be next. This bodes ill for all minority faiths in Russia. Let us therefore hope that this barbaric anti-gay law is repealed, and that Russia once again moves toward becoming a free and open society.