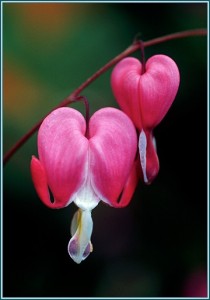 As Mahaprabhu was absorbed in rasa, feelings of separation from Krishna erupted and he raved like a madman in anxiety, remorse, and humility.1 His love intensified such that his sthayi-bhava reigned like an emperor over all other attendant bhavas, tasting them, nourishing itself, and immersing him in an ocean of bhakti-rasa. Sri Kaviraja Krishnadasa uses the word rasantaravese to describe Mahaprabhu’s condition—internally absorbed in aesthetic rapture. In doing so he highlights how this verse signals the onset of Mahaprabhu’s prema, for internal absorption in rasa indicates that one has attained prema. As we shall see, prema makes its initial appearance in the dark night of the soul’s unbearable pain of love in separation.

It is difficult to describe the depth of the emotive experience of prema. In Brhad-bhagavatamrta, Narada, while attempting to explain the nature of Radha’s love for Krishna, concludes that prema cannot be fully described. However, if we look to Radha’s dearmost, Sri Rupa, we find a wealth of words on this most esoteric subject. In the beginning of his Bhakti-rasamrta-sindhu, Sri Caitanya’s chosen spokesperson defines prema thus: “The wise say that prema is bhava intensified. It softens the heart completely and fosters a sense of possessiveness.”2 Prema’s svarupa-laksana is intensification of bhava, which as we learned from the previous Siksastakam verse is but a ray of the sun of prema. The complete softening of the heart and awakening of the sense that “Krishna is mine” are prema’s tatastha-laksana.

Intensification of bhava transports the devotee from being influenced by Krishna’s svarupa-sakti to being entirely situated within it. This is known as svarupavesa, full absorption in one’s inner spiritual identity, or svarupa-siddhi, the perfection of identifying with one’s svarupa, wherein one experiences the highest happiness. Rupa Goswami writes that this happiness exceeds the happiness of Brahman realization just as an ocean exceeds a mere drop of water.3 Higher than the eternal peace and quietude of brahmananda is the svarupananda of Bhagavan, in which he takes pleasure in his own eternal perfection. Higher still is svarupa-saktyananda, in which Bhagavan’s devotees take pleasure in him. It is this happiness, brought about by the intensification of bhava, that prema-bhaktas taste. Thus Sri Rupa refers to the happiness prema affords as sandrananda-visesatma, a condensation of happiness (sandrananda) experienced by one who is completely enveloped in Sri Krishna’s svarupa-sakti (visesatma).4

This extraordinary spiritual happiness is strengthened by prema’s power to completely charm Sri Krishna, sri-krishnakarsini.5 Only prema has this power to bring Krishna under one’s control. Prema is directed not to Krishna alone but to Krishna along with his entourage. According to Sri Jiva Goswami , this is the significance of the word sri in the phrase sri-krishnakarsini. It refers to his entourage, which is constituted of his svarupa-sakti. As prema captivates Krishna, so too does it captivate his merciful associates. As it does so, it secures the prema-bhaktas’ happiness in svarupa-saktyananda or sandrananda-visesatma.

Although love in separation is a theme that runs throughout Krishna’s Vraja lila, it is highlighted in the case of Radha.6 In his Padyavali compilation of verses, Sri Rupa has placed this seventh stanza of Siksastakam in the context of illustrating Radha’s love in separation from Krishna. In doing so Sri Rupa tells us that from this verse of Siksastakam we can understand that Gaura’s sthayi-bhava is that of a lover—Radha’s love for Krishna. Thus after a six-verse preface, it is here in this verse that Krishna as Gaura begins to actually confess his act of thievery. He tried to steal Radha’s bhava, and just see what difficulty it caused him!

Sri Krsnadasa Kaviraja Goswami describes Gaura’s prema in separation as being filled with anxiety (udvega), remorse (visada), and humility (dainya). Anxiety is the second of ten conditions of separation experienced by all the inhabitants of Vraja. Thus it is not exclusive to romantic love, or madhurya-rasa, although it is certainly heightened therein. Remorse is a vyabhicari-bhava that serves to augment one’s sthayi-bhava. Humility can also be experienced as a vyabhicari-bhava, but to limit our discussion of it to this particular manifestation of humility will not do justice to its overall importance in relation to prema-bhakti. Sri Sanatana Goswami writes about the relationship between humility and prema in his Brhad-bhagavatamrta:

Wise men define dainya as the state in which one always thinks oneself exceptionally incapable and low, even when endowed with all excellences. An intelligent person should carefully cultivate speech, behavior, and thinking that fix him in utter humility, and anything that stands in the way of it he should avoid. Dainya at its most exalted comes forth when prema, pure love of God, reaches full maturity, as it did in the women of Gokula when they were separated from Krishna. When dainya fully matures, prema unfolds without limit. And so we see dainya and prema acting in a relationship in which each is both cause and effect.7

True spiritual humility is found in those well endowed with spiritual excellences, for the poor are humble only out of circumstance. There is no wealth greater than prema, and when we see humility in those who have it, we witness humility’s full face. Mundane humility can be developed by human effort, but spiritual humility results only from receiving God’s blessing. The gopis exhibited this kind of humility in viraha-bhava, or the ecstasy of love in separation. It is through feelings of love augmented by separation that this intense humility is experienced. Such humility is an integral component of prema, for just as humility fosters prema, prema in turn fosters humility. 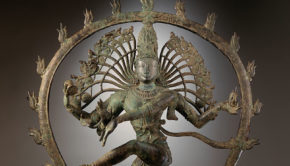 Lord Siva: The Glance of Love → 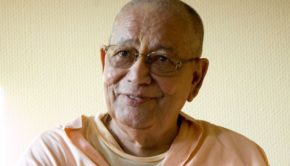 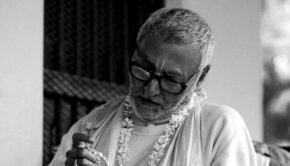 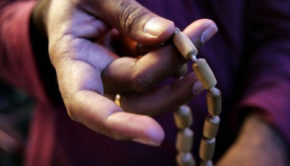 79 Responses to Humility and Prema