Sectarianism is “of the Devil” 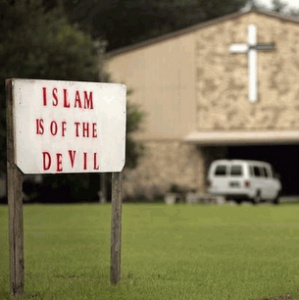 Recently, the Florida-based Dove World Outreach Center has been appearing in the news for their campaign, “Islam is of the Devil”, a title shared by the recent book authored by the church’s pastor, Dr. Terry Jones.

The group feels that simply educating the public is insufficient, as they have declared September 11, 2010 “International Burn a Quran Day”, a rather self-explanatory event. Churchmember Wayne Sapp has even posted videos of a “warm-up” burning on Youtube, rallying the troops with convincing arguments such as, “Christ appeared to destroy the works of the devil,” and, “To call yourself Christian, you should be burning the Quran.”

Meanwhile, over on the Islam is of the Devil website, Pastor Jones offers his own pep rally, informing us that “the desire of all Muslims is to replace the Constitution of the United States with Sharia law.” Ridiculous, sweeping statements aside, I suspect Pastor Jones’ real fear is that he could be forbidden from marketing his truly American, fifteen dollar, Islam is of the Devil coffee mugs and T-shirts.

When asked in a CNN interview why he would want to burn the sacred book of 1.5 billion people, Jones responded, “Well, for one thing, to us, the book is not sacred.” This almost unfathomably egocentric statement begins to uncover what I think is often at the heart of fanaticism: a complete and utter lack of understanding and respect for any view or practice that is not one’s own. One shudders to think of the type of exposition that fills the pages of Islam is of the Devil.

Unfortunately, this casual and ill-informed disregard appears often within the Gaudiya community and, oddly, is mostly directed toward other Gaudiya groups. To illustrate, we can simply rephrase the above interview: “Why would you want to insult the teacher of x number of people?” and wait for the answer, “Well, for one thing, to us, he is not a bona fide teacher.” Such a discussion, especially online, hardly makes a stir; it has come to be expected and maybe even considered normal, a sign of just how bad the situation really is.

Like Jones, fanatics who deride the faith of others often claim to be doing so in hopes of helping the misguided who are on the receiving end of their inspired vomit. Despite this approach being an ill-reasoned one, it is not even the true motive of its perpetrators. The incessant drive to convert (especially to convert via attack) only reveals the rickety faith of the converter coupled with the oft-subscribed, subconscious misconception that the conversion of others will make one’s own adherence more substantial. Daniel Schultz of The Revealer describes the other purpose usually served in these scenarios in relation to Dove World’s Islam campaign: “If there is to be a conversion, then, it will be a movement of ‘weak’ Christians to ‘strong’ ones, believers who burn with the spirit of over-againstness.” And this is the fruit of such outreach: superficially strong devotees whose strength only exists when there is an opposing force to hold it up, an enemy to denigrate and feel superior to. Lucky for them (and unfortunate for those who are trained otherwise), the potential enemies all too often bear the same negative sentiments, ensuring the mutual propping up of each others’ faith for generations to come.

In the end, it is selfishness and the concomitant ego-assertion that are “of the devil.” To the extent that any religious or other group become vessels for these tendencies, we can consider them legitimate enemies. In which case, if we engage them at all, we are to do so in an appropriate way, knowing full well that we can expect to see little fruition, but also that such critiques will call our own progress, and not in the illusory way that fanatical tirades do.

121 Responses to Sectarianism is “of the Devil”