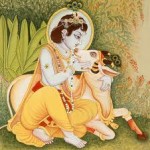 I am not a member of the ‘save the cow committee’. I am a member of the Krsna consciousness movement. I am to deal with that. There are so many associations. The Jains and so-called Hindus may be very eager to form associations against cow-killing and proclaim, “Don’t kill the cow.” We belong to another plane. What is the question of killing a cow? Krsna says in Bhagavad-gita that there is a position in which one can efface the entire universe, including all the cows, brahmanas, and sadhus within it, and still receive no reaction.1 There is such a position. Try to attain that position. That position is not the highest position either. But through that you are to pass to the plane of pure self-abnegation.

“Sanatana, if by giving up this body one can get Krsna, then in a second I am ready to die crores of times.”Sri Caitanya-caritamrita, Antya, 4.55

But we cannot connect with Krsna through such foolish sacrifice. It has got its own way: sravana-kirtana, sadhu-sanga, Vaishnava-seva (hearing and chanting about Krsna, association and serving his devotees). Krsna cannot be reached by sacrificing the body. That is a ksatriya tendency, a brutal tendency, “I kill my own body. I am a very big man.” No. It is a foolish attempt. It may amaze a worldly man but in Krsna consciousness a worldly hero has no value.

Trying to stop cow-killing may be the duty of someone in a particular plane of life. If anyone comes to me, I may say, “Oh! Don’t kill.” So much I may say. But I shall not go to fight and die for that cause. My time is so valuable; it is there to attain Krsna consciousness. I can’t waste my time in material struggle.

The Lord’s interest is so great that Abraham was going to kill his son Ishmael for Him. Abraham heard that Allah wanted him to sacrifice his son and he was ready to do that. To satisfy the sweet will of Krsna, not Krsna, but some conception of the Lord, he was required to kill his son, and he was up to that test: “Yes. I am ready.” So Krsna is so high. In comparison to Krsna’s service, to save the body of a cow or other things cannot become a concern. Such things are a much lower propensity. Krsna’s service is so high.

Everything can be sacrificed for Krsna. His service is so valuable. Nothing can be compared to it. It is so valuable, so urgent, so necessary, and so pure. We should not cheat ourselves. To feel that we are engaged in krsna-katha, that we can try to serve Krsna, that is so high, so valuable. An ordinary man immersed in maya’s good and bad, in sattva-raja-tama (the modes of material nature), will try to stop cow killing, protect brahmanas, and so on.