The Philosophy of ‘Her’ 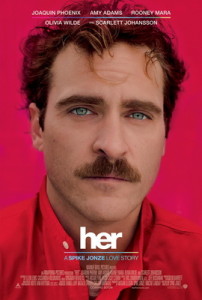 By Susan Schneider, originally published in The New York Times.

Set in the not-too-distant future, Spike Jonze’s film “Her” explores the romantic relationship between Samantha, a computer program, and Theodore Twombly, a human being. Though Samantha is not human, she feels the pangs of heartbreak, intermittently longs for a body and is bewildered by her own evolution. She has a rich inner life, complete with experiences and sensations.

“Her” raises two questions that have long preoccupied philosophers. Are nonbiological creatures like Samantha capable of consciousness — at least in theory, if not yet in practice? And if so, does that mean that we humans might one day be able to upload our own minds to computers, perhaps to join Samantha in being untethered from “a body that’s inevitably going to die”?

This is not mere speculation. The Future of Humanity Institute at Oxford University has released a report on the technological requirements for uploading a mind to a machine. A Defense Department agency has funded a program, Synapse, that is trying to develop a computer that resembles a brain in form and function. The futurist Ray Kurzweil, now a director of engineering at Google, has even discussed the potential advantages of forming friendships, “Her”-style, with personalized artificial intelligence systems. He and others contend that we are fast approaching the “technological singularity,” a point at which artificial intelligence, or A.I., surpasses human intelligence, with unpredictable consequences for civilization and human nature.

Is all of this really possible? Not everyone thinks so. Some people argue that the capacity to be conscious is unique to biological organisms, so that even superintelligent A.I. programs would be devoid of conscious experience. If this view is correct, then a relationship between a human being and a program like Samantha, however intelligent she might be, would be hopelessly one-sided. Moreover, few humans would want to join Samantha, for to upload your brain to a computer would be to forfeit your consciousness.

This view, however, has been steadily losing ground. Its opponents point out that our best empirical theory of the brain holds that it is an information-processing system and that all mental functions are computations. If this is right, then creatures like Samantha can be conscious, for they have the same kind of minds as ours: computational ones. Just as a phone call and a smoke signal can convey the same information, thought can have both silicon- and carbon-based substrates. Indeed, scientists have produced silicon-based artificial neurons that can exchange information with real neurons. The neural code increasingly seems to be a computational one.

You might worry that we could never be certain that programs like Samantha were conscious. This concern is akin to the longstanding philosophical conundrum known as the “problem of other minds.” The problem is that although you can know that you yourself are conscious, you cannot know for sure that other people are. You might, after all, be witnessing behavior with no accompanying conscious component.

In the face of the problem of other minds, all you can do is note that other people have brains that are structurally similar to your own and conclude that since you yourself are conscious, others are likely to be conscious as well. When confronted with a high-level A.I. program like Samantha, your predicament wouldn’t be all that different, especially if that program had been engineered to work like the human brain. While we couldn’t be certain that an A.I. program genuinely felt anything, we can’t be certain that other humans do, either. But it would seem probable in both cases.

If the Samanthas of the future will have inner lives like ours, however, I suspect that we will not be able to upload ourselves to computers to join them in the digital universe. To see why, imagine that Theodore wants to upload himself. Imagine, furthermore, that uploading involves (a) scanning a human brain in such exacting detail that it destroys the original and (b) creating a software model that thinks and behaves in precisely the same way as the original did. If Theodore were to undergo this procedure, would he succeed in transferring himself into the digital realm? Or would he, as I suspect, succeed only in killing himself, leaving behind a computational copy of his mind — one that, adding insult to injury, would date his girlfriend?

Furthermore, if Theodore were to truly upload his mind (as opposed to merely copy its contents), then he could be downloaded to multiple other computers. Suppose that there are five such downloads: Which one is the real Theodore? It is hard to provide a nonarbitrary answer. Could all of the downloads be Theodore? This seems bizarre: As a rule, physical objects and living things do not occupy multiple locations at once. It is far more likely that none of the downloads are Theodore, and that he did not upload in the first place.

Does this mean that uploading projects should be scrapped? I don’t think so, for uploading technology can benefit our species. A global catastrophe may make the world inhospitable to biological life forms, and uploading may be the only way to preserve the human way of life and thinking, if not actual humans themselves. And uploading could facilitate the development of brain therapies and enhancements that can benefit humans and nonhuman animals. Furthermore, uploading may give rise to a form of superintelligent A.I. A.I. that is descended from us may have greater chance of being benevolent toward us.

Finally, some humans will understandably want digital backups of themselves. What if you found out that you were going to die soon? A desire to contribute a backup copy of yourself might outweigh your desire to spend a few more days on the planet. Or you might wish to leave a copy of yourself to communicate with your children or complete projects that you care about. Indeed, the Samanthas of the future might be uploaded copies of deceased humans we have loved deeply. Or perhaps our best friends will be copies of ourselves, but tweaked in ways we find insightful.

6 Responses to The Philosophy of ‘Her’