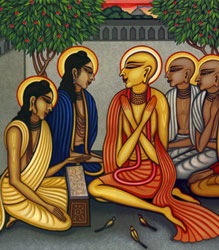 Q. I was drawn to the mysticism of Chaitanya Mahaprabhu but found present-day Gaudiya Vaishnavism to be more of an institutionalized religion than a mystic path. With administrators and congregants, doctrines and rules, it resembles Islam and Christianity more than Sufism. Where are the mystics?

A. The basic difference between religion and mysticism is that the former is a general system of belief and worship, and the latter is the personal quest for realization and spiritual experience through contemplation and self-surrender. While some people take to Gaudiya Vaishnavism for socio-religious reasons, I think the majority of Westerners do so in pursuit of love of God and the mystical experience this involves. This is an all-consuming affair, a by-product of which is the deconstruction of one’s conventional material ego.

That said, like other spiritual traditions, there are both religious and mystical approaches to Gaudiya Vaishnavism. While I have said that I believe most Western participants approach in pursuit of the latter, not everyone does. As such, some Gaudiya institutions emphasize a religious approach.

In reference to your example, the important distinction between converting to Islam and embracing Sufism is one of orientation as discussed above. Futhermore, the practice of Sufism includes poverty, celibacy, ritual poetry, dance, and prayer, including the recitation of God’s names, not all of which is included in the practice of Islam.

Similarly, in a mystic’s approach to Gaudiya Vaishnavism, students practice self-restraint, humility, tolerance, devotional practice, and so forth. In Vaishnavism this quest is called sadhana bhakti, wherein the guru guides the student through the stages of spiritual development as outlined in the sacred texts.

“In the beginning, there must be faith (sraddha). Then one becomes interested in associating with pure devotees (sadhu-sanga). Thereafter, one is initiated by the spiritual master, under whose orders one executes the regulative principles (bhajana kriya). Thus one is freed from all unwanted habits (artha-nivritti) and becomes firmly fixed in devotional service (nistha). Thereafter, one develops taste (ruci) and attachment (asakti). This is the way of sadhana bhakti, the execution of devotional service according to the regulative principles. Gradually emotions intensify (bhava), and finally there is an awakening of love (prema).”

So the answer to your question “Where are the mystics?” is found in this verse by Rupa Goswami. Once practitioners reach the stage of nistha, enduring spiritual experience characterizes their practice, and as the stage of ruci is attained, the medicine of spiritual practices turns into the practitioner’s food. Devotees who are fixed on the path of sadhana bhakti and who have who have attained a genuine taste for chanting, and are emotionally attached to the personal service of Krishna are the modern mystics of Gaudiya Vaishnavism. In time they will experience all that divine love has to offer.

Q. You wrote, “In the nitya Vrindavan lila, everyone likes to refer to Krishna as ‘Hari,’ thinking how he has stolen their hearts. This is why we like to call chanting the Holy Name, ‘Harinama.’ Think of this and do Harinama, and prema will come quickly. It’s that simple! Try to feel it. Jaya jaya harinama cid anandamrita dhama!”

You say, “It’s that simple!” but all considered it doesn’t seem that simple to me. Could you elaborate on this?

A. Sometimes devotees make statements like this, seeing the conditioning of others to be insignificant and temporary in relation to that which they are now connected with—the grace of harinama. From that perspective it appears that prema will come quickly, if one’s heart is truly stolen by Hari. I am also trying to encourage devotees to actually think of Krishna, and how he charms the inhabitants of Vrindavan; this in the hope that they will be inspired enough by our ideal to attend to the work at hand, cleansing the heart. This does take time, but it is important to know why it is worth doing.

But the practice itself is simple. However, paying attention to it may be difficult. Still, comparatively it is a much simpler and more user-friendly path than other ego-effacing practices. This is so because it employs the practitioner’s senses positively in relation to sense objects through acts of God-centered love. Because our materially conditioned life is a sensual one, we are accustomed to engaging with sense objects. In sadhana bhakti we continue to do so with a different conceptual orientation, rather than forgoing such interaction with sense objects in acts of austerity and detachment. We give our heart to Hari and thus engage our minds and senses only in his divine service.

Q. From what I’ve read in the scriptures, the Bhagavata marg, which centers on hearing and chanting the name of Krishna, is by itself capable of giving prema. If this is indeed the case, why is there so much emphasis on chanting one’s diksa mantras and Deity worship
(arcana)?

A. Harinama can give prema. However, Sri Jiva Goswami stresses in Bhakti-sandarbha that the 18-syllable Krishna-mantra is also important. This is so because within it names of Krishna are arranged in such a manner as to reveal a particular relationship with Krishna in due course. So the idea is that with the help of the Krishna-mantra one will be better equipped to proceed along the path. This mantra also enables one to engage in arcana, and with all of its regulation, arcana is most helpful in purifying the mind and heart of the materially conditioned jiva. Since the time of its inception, Gaudiya Vaishnavism has stressed that one receive the blessing of the guru to chant harinama along with mantra diksa. Thus while chanting harinama is independent even of diksa, harinama has chosen to reveal himself though diksa received from sri guru. Consequently, to disregard the guru and avoid mantra diksa in the name of chanting harinama alone is to commit the nama aparadha of guru avajna, disrespecting the guru.

Q. Some devotees experience a strong taste for Krishna consciousness in their first initial months or years of practice that gradually wanes to the point that they are not very interested in chanting, associating with devotees, and so on. Is there any qualitative difference in this type of initial taste from the fixed taste (ruci) established after many years of nistha or steadiness? Is there a primary reason for losing one’s initial taste or can there be many causes?

A. There may be any number of reasons for the waning of one’s initial enthusiasm or taste for bhakti. After all, in the initial stages of sadhana bhakti one’s practice is unsteady. While some taste is present in these early stages, when obstacles arise and one’s practice is interrupted, so too will one’s enthusiasm wane.

Neophyte devotees may think that they understand bhakti, but when they find out that it is more complex than they initially thought, they might lose enthusiasm to practice seriously, realizing that the goal is more distant and the price greater than they initially thought. Offenses committed against devotees and bhakti will also become obstacles to one’s practice and cause enthusiasm to wane. Overall, one cannot expect enthusiasm for bhakti to be steady until one’s enthusiasm of other things dries up. Still, by the mercy of bhakti, even devotees burdened by material desire will sometimes experience something of the sweet taste of bhakti proper.

But any taste in this early stage of practice is at best ruci abhasa, a shadow of actual spiritual taste for bhakti. It is not reliable. Ruci proper corresponds with the retiring of material desire. Chaitanya Mahaprabhu has spoken of it in these terms.

“O Lord of the Universe, I don’t want wealth, followers, beautiful women, or verse. I only ask for unalloyed bhakti unto you, O Praneshvara, birth after birth.”Siksastakam 4

In the devotional stage of ruci, one becomes attached to bhakti with a particular taste. A ruci bhakta bids farewell to the ishvara, or Paramatma presiding over the material world, as one’s prana ishvara (Lord of one’s life/heart) or ishta devata begins to come into view. Thus such a devotee is focused by taste and he or she intentionally cultivates the desire to serve Krishna favorably, the desire to attain a specific service to Krishna, and the desire to establish an affectionate relationship with him. The ruci bhakta‘s intelligence serves his or her ruci, as opposed to the stage of nistha where one’s taste is subordinate to one’s spiritual-intellect-driven seva.

Ruci is suddha-bhakti. A ruci bhakta is a pure devotee but is not yet a graduate from sadhana-bhakti. He or she is attached to bhakti of a particular nature not yet completely attached to the corresponding object of bhakti until reaching asakti, at which point one’s spiritual identity that corresponds with such attachment dawns in a spiritual life in which the sun of prema will gradually rise, never to set.

The eight stanzas of Siksastakam detail the spiritual practice of Sri Krishna sankirtana and the steps it takes its practitioner through in pursuit of spiritual perfection. Poetic and spiritually profound, these eight stanzas constitute the entire literary legacy of Sri Chaitanya.