Review: Sam Harris’ Waking Up: A Guide to Spirituality without Religon 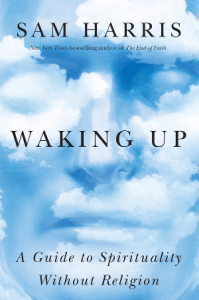 The core flaw of the New Atheists is their understanding of the quarrel as not between revelation and reason, but as between religion and science, meaning specifically modern physics and evolutionary theory. Despite its familiarity, the equation of reason and science is not uncontested. From Plato naming the philosopher Heraclitus one of “Homer’s Army” to Hegel’s critique of phrenology and physiognomy, there is a long tradition of recognizing the products of rationality as a font of belief capable of orthodoxy as much as any theism. In ignorance of this side of the debate, the latest releases of the New Atheists take on the character not of reasoned arguments for secular, Enlightenment values, but rather of yet another “lifestyle” attempting to replace religion, not refute it.

Cue Sam Harris’ new book, Waking Up: A Guide to Spirituality Without Religion. Far from a delicate and profound meditation on the possibility of a meaningful life despite the absence of a deity, of which there are many in the philosophical tradition, Harris’ book has the distinctly irrational tone of an author who already has all the answers, and is only to pleased to share them with an eager audience. For him, it seems, the millennia-long struggle to decide whether reason or religion is correct is over, and atheism has won. What he has now set himself to is determining the ways in which we will live in a post-religious era.

Harris’ answer to this pressing question is a mixture of neuropsychology, in which he has a doctorate, and Eastern-inspired meditation. A bizarre, if not completely unfamiliar mixture, the claim is roughly that there is an identifiable neural process one undergoes in what is referred to as a “spiritual experience,” but that the significance of this is not rationally, that is, scientifically, accessible. The main claim of the book is that there is no “self,” but rather a moment-to-moment experience of presence, the true meaning of spirituality is to be in communion with. “Consciousness,” he writes, “is simply the light by which the contours of our mind and body are known.” One wishes that he would, in making this claim, distinguish between consciousness and the mind, but he rather only does so between consciousness and the brain. Indeed, he denies there is a difference between the brain and the mind. He writes, “We know, of course, that human minds are the product of human brains.” Well, yes and no. Of course, without the grey matter floating around upstairs there would be very little of this chatting and theorizing. But that is not to say that by understanding the mechanisms of the brain we understand what it is for a human being to know, to feel, to be. Indeed, Harris spends a great deal of the book exploring the most popular ways in which scientists and scientifically-minded philosophers have dealt with the question and come up largely empty handed.

The prescription he makes for dealing with this apparent dilemma is to turn to the East, and seek out this wisdom of meditation and such activities as yoga. Following impressively concise and fluent descriptions of rather complex neurology and contemporary analytic philosophy, Harris provides several guides for such practices, as well as a tour of the Western experience dabbling in them. This is, independent of Harris’ purposes, a fascinating topic, and since the crisis of confidence the West has experienced in the wake of the 20th century, there have been many prominent and clear-sighted people who have looked to India, China, the Middle East, and elsewhere for answers. There is, despite the excesses of the campus with which we are all familiar, a real exploration to be undertaken here.

Unfortunately, Harris makes his case in the most clichéd and philosophically uninteresting manner possible. … [H]e takes the fashionable route of mixing the rigidly precise, if thematically narrow, empirical neuroscience with the wishy-washy warbling of new age spiritualism. Much like his ignorance of Plato on the topic of the soul, Harris seems unaware of almost the entirety of the Western philosophical tradition. Either this or he silently rejects it. “Few scientists and philosophers,” he writes, “have developed strong skills of introspection.” Reading this line is perhaps the kind of feeling of transcendence Harris is advocating. I felt, briefly, as though I had left my body, the delicate balance that allows life temporarily thrown off by such a marvelously stupid sentence. I have reservations about the state of academic philosophy, but surely most programs must still assign books of philosophy to at least their freshmen. It has been some time since college, I suppose, and Descartes doesn’t stick for everyone. And so, for the ostensibly greener pastures of neurology and Eastern-inspired good vibes, Harris abandons the extraordinary efforts of philosophy, which, perhaps most ironically, are the foundations for his own understanding of science and religion.

This article was originally written for and published at Open Letters Monthly, and is partially reproduced here without the permission of the author, who is not affiliated with this website or its views.