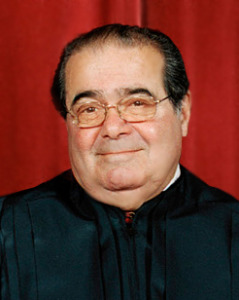 The separation of church and state doesn’t mean “the government cannot favor religion over non-religion,” Supreme Court Justice Antonin Scalia argued during a speech at Colorado Christian University on Wednesday, according to The Washington Times.

Defending his strict adherence to the plain text of the Constitution, Scalia knocked secular qualms over the role of religion in the public sphere as “utterly absurd,” arguing that the Constitution is only obligated to protect freedom of religion — not freedom from it.

“I think the main fight is to dissuade Americans from what the secularists are trying to persuade them to be true: that the separation of church and state means that the government cannot favor religion over non-religion,” the Reagan-appointed jurist told the crowd of about 400 people.

“We do Him [God] honor in our pledge of allegiance, in all our public ceremonies,” the conservative Catholic justice continued. “There’s nothing wrong with that. It is in the best of American traditions, and don’t let anybody tell you otherwise. I think we have to fight that tendency of the secularists to impose it on all of us through the Constitution.”

This article is published in full at Huffington Post, and is partially reproduced here without the permission of the author, who is not affiliated with this website or its views.