The Ritvik House of Cards 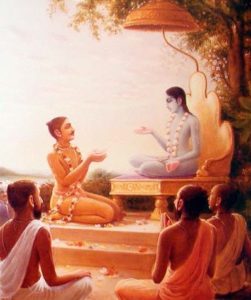 “This ritvik notion blinds its adherents from recognizing the qualified gurus among us, which if acknowledged, would bring the whole idea down like a house of cards.”

Q. There is a lot of discussion about “ritviks,” but so far I haven’t really gotten a grasp on the issue. What is a ritvik, and what is the controversy all about?

A. The word ritvik refers to a delegated representative of the guru, in this case one who performs initiations on the guru’s behalf. The current phenomenon of ritvik initiation in the Gaudiya community is a twist on the perennial notion of guru- parampara, or ongoing succession of gurus, whereby spiritual knowledge/bhakti is imparted from guru to disciple.

Scripture teaches that when the current initiating guru passes away his or her qualified disciple becomes the guru of the next generation of students. However, the ritvik notion in question contends that after the physical departure of the guru if there is no qualified disciple to continue the chain of spiritual command then a system of ritvik is to be substituted. In this system adherents designate a devotee to initiate students on behalf of the previous guru in succession with the initiates becoming disciples of the departed guru (in this case Srila Prabhupada).

The problem with this novel idea is that it lacks scriptural and historical precedent. Furthermore, it effectively does away with the perennial and scripturally based system of parampara (one guru after another), which in effect freezes time, rendering the dissemination of the teachings out of touch with new times and circumstances. By definition, the ritvik notion can only flourish, if at all, to the extent that a qualified living guru is not present to initiate disciples. Born from sentiment and/or religious fanaticism and fueled by examples of unfit persons posing as gurus, this notion blinds its adherents from recognizing the qualified gurus among us, which if acknowledged, would bring the whole ritvik idea down like a house of cards.

Q. What is the qualification of a disciple who is fit to serve in the capacity of a guru?

A. To serve as guru, one must be well versed in the scriptural canon and capable of citing it in a manner that removes the doubts of one’s disciples, thus freeing them to move forward on the path of bhakti. Such theoretical knowledge must be backed by realization as one can only give to others what one possesses. Ours is a school of suddha-bhakti, which must be taught and represented by one who is suddha, or pure. In the fourth stanza of his eight-fold teaching, Siksastakam, Sri Caitanya Mahaprabhu describes such purity as the absence of material desire combined with spiritual attachment to bhakti itself.

“O Lord of the universe, I don’t want wealth, followers, beautiful women, or verse. I only ask for unalloyed bhakti unto you, O Pranesvara, birth after birth.” Siksastakam 4

In the words of Pujyapada B. R. Sridhara Deva Goswami, one who has attained the devotional stage of ruci (taste), as epitomized in this verse, is safe and therefore qualified to help others. In his Bhakti-tattva-viveka, Bhaktivinoda Thakura describes those who have attained ruci as suddha bhaktas, or pure devotees. Ruci bhaktas as well as those who have entered the following devotional stage known as asakti (attachment) are considered mahabhagavatas, of which there are three varieties: murcchita kasaya, nidhuta kasaya, and bhagavata parsada deha prapta. The most elevated of the three is
bhagavat-parsada-deha-prapta. Second is the nirdhuta-kasaya, and third is the murchitta-kasaya.

An example of murcchita kasaya is Narada as a sadhaka after leaving home and experiencing a provisional darsana of Sri Krsna. The example of the nirduddha kasaya is Sukadeva Goswami as a jivan mukta devotee. The example of the bhagavata parsada deha prapta is Narada at the time he was awarded his svarupa. Another way of categorizing the murcchita and nirdhutta kasaya mahabhagvatas is to refer to them as neophyte superlative devotees (kanistha uttama) or intermediate superlative (madhyama uttama) devotees respectively. Following this description, the bhagavata parsada deha prapta devotee would be categorized as a superlative superlative devotee (uttama uttama). Any of these mahabhagavatas serving in the capacity of intermediate devotees in the sense of exercising discrimination required for the dissemination of the teachings is very capable of guiding others.

Indeed, as exhaustively explained by Sri Visvanatha Cakravarti Thakura in his Madhurya Kadambani, even advanced intermediate devotees are qualified to initiate others. It is through intermediate devotees that Bhakti-devi typically distributes herself. Anyone fortunate enough to recognize such advanced devotees, either superlative intermediate devotees or any of the three mahabhagavatas described above, is fortunate. And such persons will easily understand the folly of the current ritvik notions.

Advocates of the ritvik system limit the scope of their conception to the International Society For Krishna Consciousness (ISKCON), an organization that has had problems maintaining credible spiritual representation in the parampara since the departure of its founder Srila Prabhupada. In addition, Srila Prabhupada has written some things that are somewhat ambiguous with regard to his succession. Together these factors fueled speculations that led to the implementation of the ritvik system of initiation in a number of Iskcon-related groups and temples. Although the official Iskcon governing board has declared the ritvik idea heretical, advocates have a foothold in the institution to the extent that some of its present gurus openly promote a covert or quasi-ritvik initiation idea in the name of humility. Furthermore, recent ecclesiastical policies concerned with keeping Iskcon’s Founder Acarya “in the center” of Iskcon have arguably moved the sect in the direction of what many other Gaudiya missions consider a formal covert ritvik system.

Fortunately, the teachings and practice of Gaudiya Vaisnavism are beyond the limitations of any particular society or organization. As B.R. Sridhara Maharaja so eloquently put it, “Krishna is independent; he cannot be confined to one side of the Ganges and not the other, nor can he be imprisoned within the walls of any particular religious institution.” Thus the relevance of the ritvik notion peculiar to Iskcon dissolves once one understands that the actual parampara is well represented elsewhere. Institutions come and go, but guru-parampara continues; this is Sri Krishna’s promise in the Bhagavad-gita: evam parampara-praptam imam rajarsayo viduh.

So within Iskcon or elsewhere, my recommendation is for students to find a vital living connection to the guru-parampara and accept siksa and mantra diksa from him or her. Without this foundational connection, one’s bhakti will surely collapse—like the proverbial house of cards.

One Response to The Ritvik House of Cards