Are Women Duplicitous and Selfish According to Bhagavatam? (Part 2) 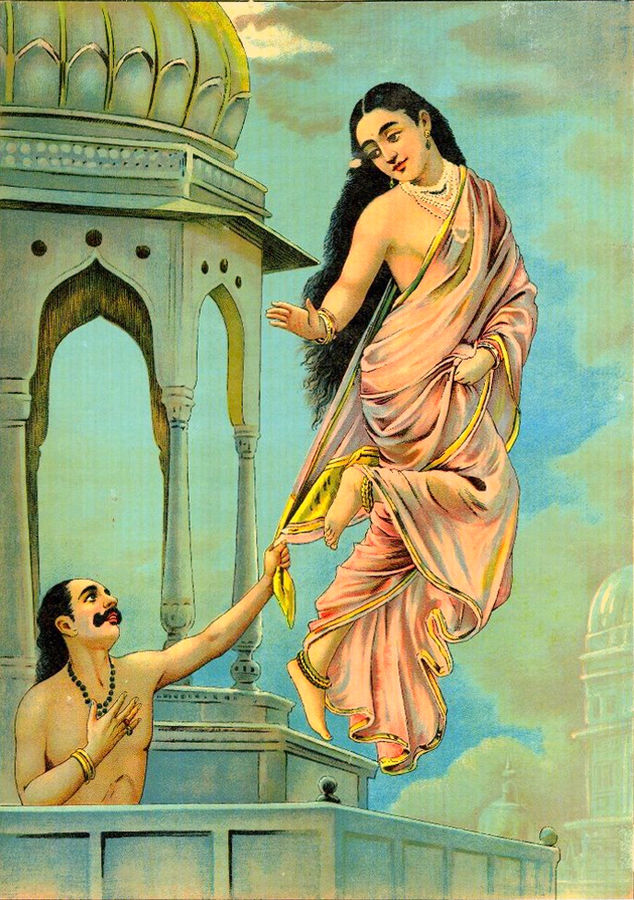 Mohini’s Criticism of Herself

As similar example can be found in the story of the churning of the milk-ocean by the devas and asuras. (Devas are those who live responsibly, looking after the condition of nature and the world. Asuras are materialistic people whose prime interest is sense gratification, regardless of its effect on nature and the world).

When the ocean was churned by these two parties, various items appeared from it. At last Dhanvantari, an avatara of Visnu and presiding deity of Ayurveda (Vedic medical science) appeared with a pot of nectar (amṛtam) in His hand. By drinking this nectar, one would attain a long life and immunity from any weapons. Immediately there was a big commotion to grab the pot. Being more powerful, the asuras succeeded in snatching it. Frustrated, the devas took shelter of Sri Visnu, who assured them He would help.

While the devas and asuras continued arguing for a share of nectar, Sri Visnu appeared as a beautiful young girl named Mohini. When the asuras saw her, their minds were completely captivated by her beauty. Marveling, they exclaimed in unison, “Oh, what a beauty! Oh what a body! Oh, what a youth!” With throbbing hearts they approached her and uttered with gleeful smiles:

“O beautiful lady, who are you and what brings you here? Indeed, with your beautiful sidelong glances you are churning our hearts. We have never seen a beautiful girl like you before. Surely you have been sent by Brahma himself to please our minds and senses. O you with beautiful thighs, we plead with you to help us solve our dispute about the distribution of this nectar. We, devas and asuras, are both sons of Kasyapa, and have acquired this nectar by our joint effort. We want you to divide it among ourselves without any bias.”

When Mohini was thus beseeched by the asuras, she smiled coyly while looking down and, touching her chin with her right hand and moving her beautiful eye brows, she spoke as follows:

“O sons of sage Kasyapa, it is foolish to put your trust in me, because you don’t even know who I am. What if I am unchaste and untrustworthy? Wise people never put faith in such frivolous women. O asuras, there is no difference between wolves and women of loose character. Their friendship is never stable, they both hunt for newer and newer prey.” Srimad Bhagavatam 8.9.9 – 10

A Hidden Purpose to Fulfill

These statements are spoken by Sri Visnu Himself in the form of a woman, yet can be read as quite demeaning towards women if divorced from their context.

Mohini was not giving a seminar on the nature of women. She actually had a hidden motive to give the nectar to the devas, and was simply being honest about not being a trustworthy friend for the deva’s enemies. To accomplish her goal, she had to win the confidence of the asuras. One way to do that is to show humility, especially in the face of praise. The asuras were already enamored by her beauty and spoke with reverence. Now, when they heard words that sounded like humility, they became completely convinced that she was a good person, the most unbiased person to distribute the nectar. Thus they fell into her trap.

After recounting these words of Mohini, Sri Sukadeva states that the asuras developed full trust in her by hearing her words, which he describes as “tricky jugglery” (ksvelitaih). Thus Sukadeva himself implies that the description of women by Mohini is not a direct “king-like” proclamation to be taken literally, it is instead, something indirect or deceptive.

Furthermore, even if we insist on direct analysis of her statement, we must note that she does not describe all women as being “wolves,” rather she describes only frivolous woman as untrustworthy. She does not say, “I am a woman, so you shouldn’t trust me.” She says, “You don’t even know who I am. Maybe I am a frivolous and untrustworthy woman.” That she is a woman is obvious, the thing the asuras should beware of is that they don’t yet know if she is a trustworthy or untrustworthy woman.

A similar and even more puzzling incidence is seen in the 14th chapter of the Ninth Canto in the description of the story of King Pururava—a great, powerful and handsome king. Once, sage Narada was describing the greatness and beauty of Pururava in Indra’s assembly. When Urvasi, one of the most beautiful heavenly damsels (apsaras) heard this, she desired to associate with King Pururava. Since Urvasi had been cursed to come to earth for some time, she took this as an opportunity to undergo the curse and come down. She met King Pururava who immediately fell in love with her and proposed that she become his wife. Urvasi agreed, but only on three conditions:

If he ever violated any of these conditions, she would immediately leave him. Actually, she stipulated these conditions because she wanted an excuse to leave Pururava and return to heaven eventually. The king readily agreed to all the conditions, his heart being completely captured by her. Thus they lived happily for many years.

Regretting Urvasi’s absence from his court, Indra in time ordered some Gandharvas to arrange for her return. The Gandharvas came to earth and in the dark night stole her sheep, who started bleating loudly. When Urvasi heard this, she immediately began lamenting and taunting the king: “Alas, alas, this king is a coward, and foolishly I have entrusted my sheep to him. He boasts about his valor but cannot even fulfill his promise to protect sheep! Certainly I have been cheated!”

These harsh words tormented the King’s heart. He immediately jumped out of bed, took up a sword, and chased the Gandharvas while still naked, just as they had plotted. They left the sheep and created light, causing the king to be naked in front of Urvasi without the purpose of uniting with her. True to her words, Urvasi immediately disappeared from his bedroom and went back to heaven to join Indra. When Pururava returned and could not find Urvasi, he was heartbroken. He searched for her day and night, feeling intense pangs of separation, and wondered all over the earth like a madman who had lost all his wealth.

Once, while he was in Kuruksetra, King Pururava saw Urvasi on the bank of the river Sarasvati along with her five female friends. The king cried out piteously, “O my wife, o my beloved, where have you gone? Come back to me, don’t leave me like this! Without you, this beautiful body will fall and will be food for wolves, jackals and vultures.” Hearing the king plead in this manner, Urvasi spoke some of the most denigrating words ever spoken about the character of women in general:

“O King, you are a heroic man. Do not give up your life like this for the benefit of wolves. You should know that women do not have true friendship with anybody. Their heart is just like the heart of wolves, devoid of compassion and are cruel by nature. They are temperamental and will risk anything for their own pleasure. To please themselves they can get their own husbands or brothers killed by tricking them into confidence. Their hard hearts can cheat innocent people after eliciting their trust. Always wanting newer and newer companions, they are unchaste and frivolous.” Srimad Bhagavatam 9.14.36 – 37

These statements have been misused to insult women by those ignorant of their real import. Every sane person knows that not all women match this description. Women are also mothers of humanity and are the most loving and kind people, especially to their children. If all women were of the nature as described here, humanity would cease to exist because women of such character would never raise babies.

Advertising executives sell products by unrealistically presenting their products accompanied by beautiful girls. Urvasi is doing the opposite here, painting an unrealistically unpleasant picture of women so that King Pururava would come to his senses and take care of his severely neglected duties as a king. We become influenced positively or negatively by hearing good or bad about a person or object. Urvasi is using this human psychology to detach King Pururava and turn him away from her.

Therefore the real intention of Urvasi, who is a woman herself, is not in describing the nature of women in general. She knew well that she could not come back to him because she belonged to another world. She had to come and lived on earth as a result of a curse by Mitra and Varuna.

Again, she is using the principle that “beloveds instruct indirectly.” She does not directly blame herself, but instead indirectly blames herself by blaming something she is associated with, in this case, her gender. In fact, she is speaking, accurately, about her personal flaws as an individual, but because she is speaking as a beloved (not as a truth-proclaiming king), she does so indirectly.

Men in general have a keen weakness to be easily attracted to the female body. This is the basic principle behind most advertisements. The products and the women in the ad often have nothing in common, but once the woman catches the man’s eye, his rationality drops and he becomes completely susceptible to accept the message of the advertisement without discrimination.

In stories like this one, sastra tries to do the opposite. Just as the object of advertisement is not to make men attracted to the girl but to sell the product, in the same way, the intention of sastra is not to denigrate women, but to make men detached so that they can be serious about spiritual life. But just as by seeing a provocative ad, a man feels attracted to the girl, similarly people who do not understand the real import of sastra nurture their hatred for women by reading such stories. Since hatred is just the back-side of attachment, this is certainly not the intention of sastra.

An important hermeneutic principle says, na hi ninda nindayitum pravartate api tu vidheya stotum: “The purpose of criticism is not to criticize others but to establish the conclusion about the subject under discussion”—which here is detachment from sense enjoyment.

Ultimate Context: Praise of the Feminine

Overall, we have to consider that in many stories of Srimad Bhagavatam women have been highly glorified, especially the gopis. To give an example, when Uddhava came to Vrindavan as a message carrier of Krsna and personally witnessed the love of the women of Vraja for Krsna, he could not but praise them beyond anyone’s expectation. This is the same Uddhava who is a student of Brhaspati, the guru of the devas, and whom Krsna Himself describes as no less than Him in any respect. This same Uddhava said,

“I continuously worship even one dust particle from the feet of the women of Vraja, the glorification of whose character purifies the three worlds.” Srimad Bhagavatam 10.47.63

Indeed, Sri Caitanya Mahaprabhu said that to get the highest love for Krsna, one has to acquire the mood of the women of Vraja.

Sastra uses many techniques to instruct human beings. Without knowing those techniques, there is a good chance of misunderstanding and misapplying of scriptural instructions. Therefore in future I plan to write a book systematically explaining the traditional authorized methodologies for understanding the statements of sastra.

2 Responses to Are Women Duplicitous and Selfish According to Bhagavatam? (Part 2)