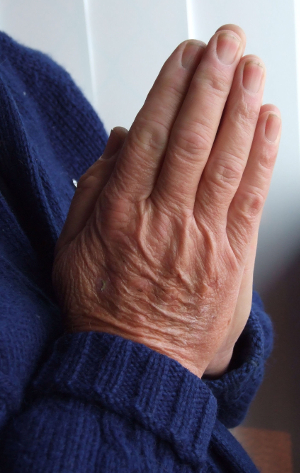 By Andrew W.K., originally published at the Village Voice

Prayer is a type of thought. It’s a lot like meditation—a type of very concentrated mental focus with passionate emotion directed towards a concept or situation, or the lack thereof. But there’s a special X-factor ingredient that makes “prayer” different than meditation or other types of thought. That X-factor is humility. This is the most seemingly contradictory aspect of prayer and what many people dislike about the feeling of praying. “Getting down on your knees” is not about lowering your power or being a weakling, it’s about showing respect for the size and grandeur of what we call existence—it’s about being humble in the presence of the vastness of life, space, and sensation, and acknowledging our extremely limited understanding of what it all really means.

Being humble is very hard for many people because it makes them feel unimportant and helpless. To embrace our own smallness is not to say we’re dumb or that we don’t matter, but to realize how amazing it is that we exist at all in the midst of so much more. To be fully alive, we must realize how much else there is besides ourselves. We must accept how much we don’t know—and how much we still have to learn—about ourselves and the whole world. Kneeling down and fully comprehending the incomprehensible is the physical act of displaying our respect for everything that isn’t “us.”

This type of selfless awareness contains a contradictory aspect that sets the tone for true immaterial experience. It’s the feeling of power in our powerlessness. A feeling of knowing that we don’t know. A feeling of gaining strength by admitting weakness. We work so hard to pump ourselves up and make ourselves believe that we know all the answers and that we have the power and strength to do anything—and we do—but the fullest version of that power comes not from our belief that we have it, but from a humbling realization that we don’t.

The paradoxical nature of this concept is difficult, but it is the key to unlocking the door of spirituality in general, and it remains the single biggest reason many people don’t like the idea of prayer or of spiritual pursuits in general—they feel it’s taking away their own power and it requires a dismantling of the reliable day-to-day life of the material world. In fact, it’s only by taking away the illusion of our own power and replacing it with a greater power—the power that comes from realizing that we don’t have to know everything—that we truly realize our full potential. And this type of power doesn’t require constant and exhausting efforts to hold-up and maintain, nor does it require us to endlessly convince ourselves and everyone else that we’re powerful, that we know what we’re doing, and that we’re in control of everything.

To know that you don’t know is the definition of a spiritual awakening. And keeping that realization at the front of our mind and in the core of our being informs the rest of our existence. It takes a deeper type of strength to admit to ourselves that we don’t have it all figured out than to run around keeping all our plates spinning. It seems strange to think that turning yourself over to your own bewilderment would actually bring clarity, but it does. Solving this riddle is the beginning of any true spiritual journey.

Many people feel threatened or uncomfortable with this sort of gray area. They like things to be “yes” or “no,” “black” or “white,” and “right” or “wrong.” They want to live in the “real world” that they can touch and make sense of. When things “don’t make sense,” they retreat. These people will have to allow themselves to fully admit that they don’t know, in order to actually begin knowing and that’s often too frightening of a task. It can be too painful to even imagine, after all those years of effort, simply abandoning our carefully crafted structures and stepping into the immense chasm of the uncharted and unknowable.

Many of us worked for years to build up our idea of the world and who we are in it. We’ve clung ever more tightly to the idea of what is true and what is false. We’ve toiled and schemed to get what we need to “be happy,” and to gain the sense of security that comes with “figuring things out” and “making it.” We do that by building a better and stronger protective shell to shield us from the painful horrors of the unknown. It can be too painful to even imagine, after all those years of effort, simply abandoning our carefully crafted structures, and stepping into the immense chasm of the uncharted and unknowable. And now, it’s time to take it.

This article was originally published at the Village Voice, and is partially reproduced here without the permission of the author, who is not affiliated with this website or its views.

4 Responses to Andrew W.K. on Prayer