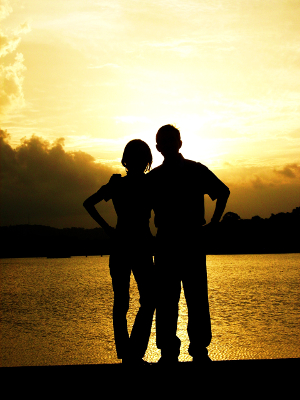 Yoga philosophy describes three gunas or elemental qualities of material nature: luminosity (goodness), activity (passion), and caliginosity (ignorance). Like primary colors, these three gunas combine to create the hues, tones and intensities of the people, places, and things that populate the world of our experience.

In stark contrast to traditional ascetic yoga, which advocates controlling the senses to the point of celibacy, modern popular yoga has become just another way to indulge the senses rather than to control them. Bhakti yoga provides a synthesis of traditional and modern yoga sensibilities. The process of bhakti yoga is not one of austere renunciation for the sake of liberation, of getting rid of material desires and then acquiring spiritual desires; it’s a process of transcendental alchemy, of cultivating spiritual desires that ultimately eclipse material desires by engaging the senses in a way that purifies the senses.

I’ll offer two answers, one orthodox and the other less so. The two are not mutually exclusive insofar as couples aspiring to the former may, out of habit formed over innumerable lifetimes, still periodically gravitate to the latter. Most people will consider the latter more realistic, or even more desirable, but it comes with a caveat.

The orthodox approach is to add intentionality and ritual to having sex within a committed relationship in order to make the act of sex and the results of sex an offering to the highest Truth. A general description of this principle appears in the third chapter of the Bhagavad Gita. This approach assumes a heterosexual relationship wherein the intention is both a deepening of the intimate relationship with one’s partner and active pursuit (or at least acceptance) of the natural result of sexual intercourse: children. The experience of sensual pleasure is an obvious and enjoyable part of the experience (or at least one would hope) and may even be magnified by virtue of the event being treated as a special occasion rather than business as usual. However, sensual pleasure is not the sole or even the primary objective of yogic sex.

One of the most mind-blowing features of yoga wisdom texts is how they describe the experience of the pre-born en route to a new set of parents who facilitate the formation of a new body. Tibetan Buddhist texts are particularly vivid in their description of how a person traversing the interstitial space between births becomes attracted to a particular set of parents. A couple who consciously create a setting for their sexual coupling that’s designed to attract a soul who’s already on the path of yoga will, naturally, have a child with a spontaneous attraction to spiritual pursuits. As parents, they will have the opportunity to help another spirit soul—their child—make further progress toward self-realization.

In America, having children today entails about a $300,000 commitment over an 18-year period per child (quantity discounts may apply). Above and beyond the financial commitment, there’s also the time and emotional energy parents must put into protecting their children and preparing them for life in the world. As any parent can tell you, this involves sacrifice: whatever you thought you would do with your life, it will take a back seat to whatever you have to do to raise your children. If you can successfully integrate your personal ambitions with your family life, more power to you.

What spiritualizes the satisfaction of sexual desire in this scenario is the not the element of sensuality, it’s the element of sacrifice. The deepening of interpersonal relationship is simultaneously tied to both the moment of sexual intimacy as an expression of interpersonal love and the shared long-term goal of actively facilitating the spiritual progress of the children who are born to you. While this includes a commitment to take responsibility for the material welfare of one’s children, having children in and of itself is not a spiritual activity if a parent’s ambitions for their children are merely material, despite the proximity to spiritual experience that enthrallment with one’s children induces.

Obviously, this approach to spiritualized sex is not universally available: gay couples in loving, committed relationships will not have children as a result of sexual intimacy, young hetero couples may not be able (or willing) to tuck their libidos away until they’re ready to have children, older couples may still feel drawn to the pleasure of one another’s intimate company after their procreative mission is completed, some people are unable to have children, and some people feel the need for an intimate partner who, like them, simply does not want to have children. This brings us to a less orthodox approach.

Bhakti yoga is the yoga of spiritual relationships. Being good at relationships is just like being good at anything else: it takes practice. In order for a relationship to be meaningful we have to be willing and able to reveal ourselves to another person and, in the process, make ourselves vulnerable. There is nothing more revealing and no situation in which we are more vulnerable than when we engage in sexual intimacy with another human being. My personal opinion is that it’s very difficult for a person to offer themselves wholly and completely to the Supreme Being without having tried to do the same thing with a human being, lest one not really know what it means to make such an offering.

This is not an excuse for promiscuity as a form of ‘practice.’ On the contrary, the experience of spiritual sexuality requires selectivity and restraint, choosing sexual partners based on trust and genuine affection nurtured over time rather than on superficial attraction or expediency. Whereas impulsive sexual intercourse requires the objectification of one’s partner, of seeing the ‘other’ as an object for our enjoyment, spiritual sexuality emphatically requires us to see and respect our partner as a person, as the subject of his or her own valid experience.

The difference between personal and impersonal sex is the difference between spirit and matter. Objectification places a person in the category of matter and, as such, cannot attain to spiritual status. Spiritual sexuality, or even that which approaches spiritual sexuality, must be personal, must come from a place of love for a person, and result in both participants moving in the direction of ultimate spiritual truth. When it’s done in spiritual consciousness, sexual intimacy—revealing ourselves fully to another person with faith and trust that they accept us as we are, love us, and will be kind to us in our most vulnerable moment—can illuminate the meaning of surrender to the Supreme Person.

Here’s the caveat: practicing yoga means living in harmony with nature. Contraception is a conspicuous subversion of nature. If one is determined to subvert nature in order to fulfill one’s desire to enjoy sexual gratification, even if the other components of spiritual intention are there, one has to accept a limitation on just how spiritual one’s sexual activity really is. The only thing that can’t be oriented toward selfless devotion is the gratification of selfish desire.

Yoga is not an ‘all-or-nothing’ proposition. Devotion doesn’t require us to be perfect before we can begin a journey towards perfection. The spiritual path meets us where we are: there’s always an opportunity to start on the path and a ‘next step’ for us to take. Even if our sexual attachments are not entirely spiritual right now, we can still take incremental steps in a spiritual direction. Whether pursuing transcendental knowledge by receptive inquiry, offering the results of our actions to the highest Truth, offering the actions themselves, or observing regulative principles and rituals that make spiritual impressions on our consciousness, anyone can make progress toward the ultimate goal of yoga: the experience of our eternal, intimate relationship with the Supreme Person.